Dash FA marked a historic debut in the Brunei Under-15 Youth League 2021 in style after a resounding 7-1 victory over Indera SC at the National Football Association of Brunei Darussalam (NFABD) Football Field ‘B’ in Berakas yesterday.

The football academy romped to a five-goal blitz in the opening half including a three-goal lead in the space of six minutes to seize control of the Group ‘B’ clash.

In the early stages of the return of competitive youth football, Awangku Hadi Aiman showed glimpses of attacking threat with his dangerous runs before maximising an opportunity to full use when he sprinted clear off his marker and coolly placing his shot into the bottom corner.

Indera SC had no time to catch a breath as Muhd Zulhusni doubled his side’s lead just a minute later after applying a cool finish having been played through by a teammate with a perfectly-timed pass.

It went from bad to worse for Indera as Md Abdul Hakimee stroked the ball home to make it 3-0 with Mohd Zulhusni turning provider after inviting danger to the box.

Awangku Hadi Aiman poked the ball home from close range for his second goal of the game after benefiting from a failed clearance. 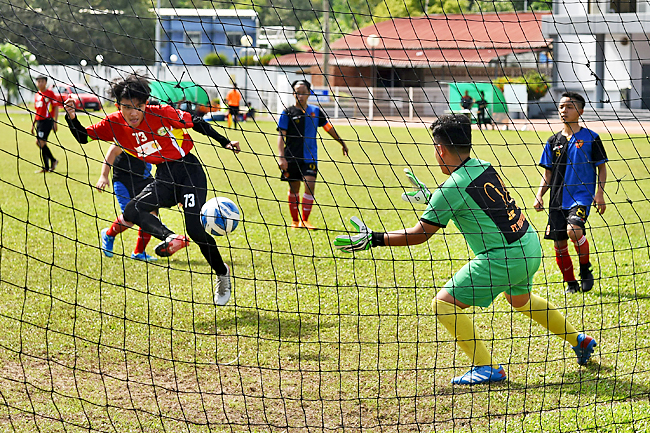 Dash captain Awangku Md Irfan Hakim stabbed the ball home at the near post for 5-0 as set-piece specialist Hamzi Hazaiq claimed an assist.

Muhd Zulhusni had an opportunity to add to his tally when he raced clear into the box but his shot was met with a decent save by Indera SC goalkeeper Md Wazien Naqiuddin.

The Kilanas-based side fared better in the second half with substitute Awangku Md Adil Azrin forcing Dash goalkeeper Awangku Mohd Dzul Ikram with a smart save.
Despite the tie seemingly out of reach, Indera were rewarded for their strong start in the second half as Mohd Fahmi scored a brilliant goal.

But, Awangku Hadi Aiman completed his hat-trick in the 53rd minute before Md Hazeeq Irhaduddin compounded Indera’s misery from the bench in the 66th minute.

Dash FA Under-15 Head Coach Hazmin Hatta bin Haji Hamzah told the Weekend Bulletin, “Today’s game against Indera marks our debut to play in a National League. It’s a historic moment for Dash Football Academy and we are proud of the players.”

He added, “The opposing team played really well and made it very difficult for us especially in the second half of the game.

“Overall, we are thankful for the performance of the players and hope that we can fix some common mistakes that happened today for our next game.”