Layers and layers to the mystery

AP – The business of making original movie sequels is often a thankless job. You can’t just do the same thing again, but you also can’t be too different either. And many watching will have their guard up from the outset, suspicious that it is ultimately just a shameless cash grab.

In the case of Knives Out, Rian Johnson’s love letter to and send-up of Agatha Christie-style whodunnits, the cash was right there in the headlines: Netflix paid USD450 million for two follow-ups to his fresh, funny film about a wealthy family and the southern gentleman detective who solves the case of the murder of their patriarch.

But you can put those worries aside: Glass Onion: A Knives Out Mystery proves that Johnson was more than up to the task. He sends the audience off to tackle a new puzzle with Daniel Craig’s shrewd, honey-voiced detective Benoit Blanc.

This time, Blanc is summoned to a private island in Greece with another group of very wealthy, very suspicious dirtbags, self-styled disruptors in the antsy, isolated days of pandemic lockdowns. 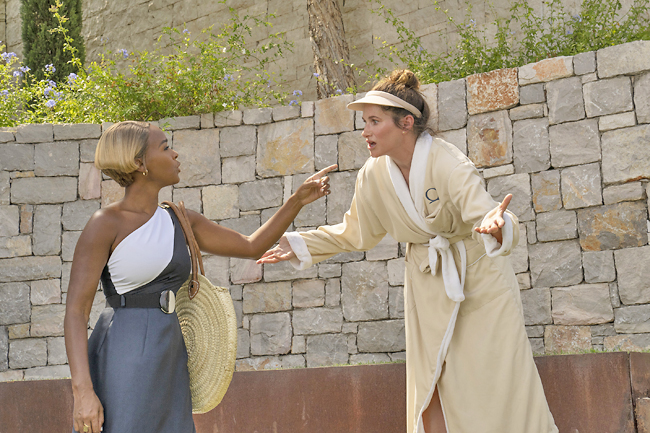 Most of them are pretty terrible, though some are less self-aware than others. Claire, for instance, seems particularly tormented about the compromises she’s made to rise in politics while Birdie just breezes through life and various social media scandals mostly unfazed.

But all of them are indebted in some way to the blustery egomaniac Miles, who dreams of being spoken of in the same breath as the Mona Lisa and exclusively communicates via fax machine.

Johnson could not have predicted that his movie would be coming out while we watched another tech billionaire attempt to run Twitter, but Miles’ bravado may sound familiar to anyone listening. Perhaps these disruptors aren’t as unpredictable as they think they are.

It’s Miles who gets the gang together, promising that they’ll play a game to solve his murder designed by none other than Gone Girl author Gillian Flynn. Blanc, who has been bored out of his mind and mostly relegated to the bathtub in his New York apartment with a boyfriend played by a very famous face that will go unspoiled, is quite excited to ditch the tub and bring out his colourful linens and silk cravats to take a closer look at this group.

If the WASPy, New England style of Knives Out became as much of a talking point as the movie itself, one can only imagine how audiences will take to Jenny Eagan’s costuming efforts in Glass Onion, from Blanc’s modestly chic matching bathing costume to Birdie’s disco-glam halter dress. The set designer also has fun with the ‘80s coke-den aesthetic of one of the key rooms.

As the title suggests, there are layers and layers to this mystery – even the central murder isn’t revealed until deep into the film, when Johnson rewinds and reframes much of what we’ve just seen. And it’s bigger, wilder and funnier than its predecessor.

The film will be in theatres this week, for a week, before streaming on Netflix on December 23, which almost guarantees that the many, many cameos will be spoiled by the time it hits your home theatre (IMDB will also spoil that, FYI). But hopefully the theatre-going audiences will be kind enough to keep the real mystery under wraps.

Glass Onion: A Knives Out Mystery, is rated PG-13 by the Motion Picture Association.