THE WASHINGTON POST – The day after her last teenager was accepted into college, Ruby Ghadially, then 57, did something she views as a mark of regained independence: She went for a run.

Though she had been active as an adult, she had primarily cycled, and it showed.

“It was a pitiful run,” recalled Ghadially, a dermatologist and researcher on ageing at the University of California at San Francisco. “My run was exactly a half a mile from my house to the golf course in the Presidio.” She stopped to rest because she couldn’t breathe and came back. “I know I ran a 14 or 15-minute mile.”

Despite her late start as a runner, Ghadially, now 63 and a member of the San Francisco-based elite Impala Racing Team, will soon be back on the track trying to better her personal best, a 6:09-minute mile – which is only 29 seconds off the world record for her age group.

At the same time many older people are giving up athletic activities, others are taking up running. And they’re not just plodding along in Turkey Trots or fundraising 5Ks – like Ghadially, they’re beating same-age peers who have trained for decades, winning national-level races and coming close to or setting age-group records. 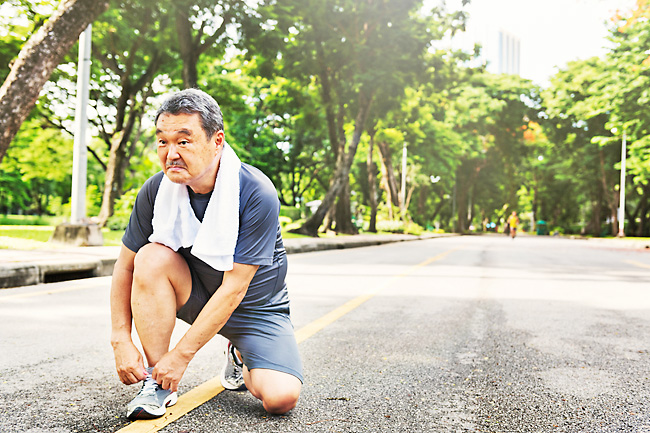 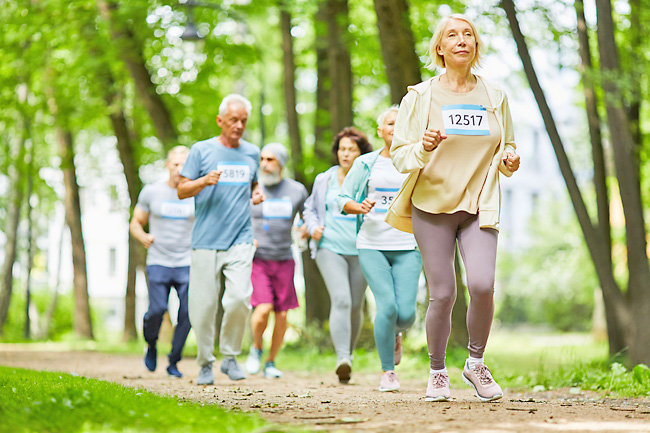 “I got divorced at 51 and had to do some personal reinventing, including finding new social groups,” Simmons said.

Brian Pilcher gave up running at Dartmouth College after a sledding accident, he said, because he was more interested in partying and surfing. It wasn’t until his son started running cross-country in 2006 that Pilcher returned to the sport. Inspired by the sense that he could improve his speed, Pilcher started racing and quickly succeeded at a variety of distances.

“They say you can’t set a personal record every time out, but I did,” said Pilcher.

Despite the 30-year hiatus from running, during which he was a self-admitted couch potato, the 64-year-old Pilcher has set US age-group records in the marathon, half-marathon and five-kilometre. He is also a four-time winner of the Dipsea Race, a legendary trail race in Northern California.

“It’s universally true that people like myself, and people much better than me, who were winning races 50 years ago are not the fastest in our age group now even though we are still running,” said Amby Burfoot, 74, winner of the 1968 Boston Marathon and a running and fitness writer for publications including The Washington Post.

“The people that are beating us, I wouldn’t say they started yesterday, by any means, because it takes a number of years to get to your potential. But they are runners in many cases who were not stars – or even runners – when they were young.”

Most people assume that top masters athletes (in running, this class applies to competitors 40 and above) are lifelong exercises, said University of Texas Professor of Exercise Science Hirofumi Tanaka who researches ageing. “If you look around among all the masters athletes, there are not many who were elite athletes when they were young,” he said. “Most of the athletes are pretty new, and they are able to improve.”

“There are the people that are good athletes that got brought into running, that have been physically active,” Joyner said. “The other group are those that had a moment, in some cases leading an unhealthy lifestyle before they got into running. The last is someone who was a good runner young but took time off and got good late.”

Burfoot said he can’t really answer why he isn’t winning races anymore. “I pound my head against the wall every day asking that question. Because the truth is, given the choice, I would be perfectly happy winning races. Yet that it is not the case.”

While it’s true that he and other lifelong runners might have “tired legs” from running tens of thousands of miles, he said.

“I can turn that around and say, ‘Wait a minute, I thought that training is what builds up all your systems, cardiovascular and structural.’ So why shouldn’t my 100,000 miles make me better than the guy that has only run 20,000 in the last 10 years?”

Tanaka has been thinking about this, too. “I think the purpose of exercising actually changes,” he said.

Elite athletes, he added, have always competed for medals. It’s different for people who start running in middle age or later. “In terms of recognitions on the podium, you really don’t experience that when you get older.”

The reasons to run cited by Ghadially and Pilcher indeed seemed to be more internal.

Pilcher said runners who have been training and racing for decades may not have the same motivation. “They don’t have something to prove,” he said. “I always knew I could run fast, but I wanted to prove it.”

Pete Magill, an author and successful masters runner, isn’t surprised that the casual exercisers of yesteryear have become the masters speedsters of today. His reasoning is that two important factors – innate running ability and longevity – don’t share the same timeline.

“It would be very odd indeed if the runners blessed with the top ability when younger also possessed the greatest longevity,” Magill said via email.

“In fact, I suspect that only the very best runners are able to successfully compete as masters runners.” That would require a scenario, he said, in which “their lack of world-class longevity is offset by the remains of world-class physical ability”.

Magill said the pool of top older runners is most likely drawn from the subset of those who are lucky enough to rank high both in physical ability and in longevity, and who have good coaches, healthy lifestyles and the drive to compete long after their physical peaks.

For some lifelong athletes, the decline in running performance is due to an accumulation of injuries, even the small ones that many runners pick up after a lifetime of pounding the pavement. The frayed tendons and thinning cartilage, and the time and energy it takes to rehab them, can limit training, ultimately hurting performance.

“In that sense,” said Tanaka, “people that have never exercised in the past have an orthopedic reserve, if you will. That you have an intact orthopedic system that you can actually engage even at older age.” And though masters-age runners have seen their performance peak come and go – in the case of endurance athletes it’s around the mid-30s – it’s still possible for them to make large improvements, especially in aerobic capacity.

Aerobic capacity, or VO2 max, which is the highest amount of oxygen consumed in exercise that combines all large muscle groups, is one of three determinants of running performance; the other two are lactate threshold, the highest level of aerobic capacity that can be sustained, and running economy, a measure of efficiency of motion.

Of the three, researchers note the largest age-related decline in aerobic capacity, which begins to fall at about 40 years old.

“When you put the three determinants into an ageing scheme, the running economy doesn’t seem to change, the lactate threshold doesn’t really change either,” said Tanaka.

Perhaps no better example of the potential to improve late-age performance exists than Robert Marchand, a 109-year-old French cyclist who owns the cycling hour record (the distance a cyclist can ride in one hour) for the 100-plus age group.

After setting the initial record at the age of 101, Marchand thought he had more in the tank and sought to better his own mark. Two years later, at 103, Marchand was able to set another hour record, after which scientists were able to document a 13-per-cent increase in his aerobic capacity.

Running, with its relative simplicity of technique, might especially lend itself to a late-career renaissance, according to Burfoot. While it may be true that you can’t teach an old dog new tricks, that doesn’t stand in the way of improving at distance running, “because there is no trick to learn”.

Runners essentially have the skills they need, he said. Improving is just a matter of arriving at a time in their life when they decide to dedicate themselves to the process.

Discovering an aptitude for competitive running entails dedication and consistency. If you learn that you have these qualities when you’re 50, said Burfoot, “you can be one of the top runners in the world five or seven years later, perhaps”.