At the end of the 500-metre passageway, the rows of mangrove trees opened up revealing a wetland devastated by a recent storm surge. About 5,000 trees in just one corner of the wetland, he said, were lost to the incoming waves.

Across the wetland, there are sections where massive mangrove trees sat lopsided, stacked on top of each other with huge chunks of their roots jutting out of the water.

Djuhana said another strong wave, which occurred much earlier, was responsible for the destruction.

Djuhana is the caretaker of Jakarta’s last remaining mangrove forests. He works at the Jakarta Parks and Forestry Agency as chief of the Pantai Indah Kapuk mangrove ecotourism and protected forest unit.

Mangrove trees were once abundant across the Indonesian capital’s 30-kilometre coastline but the need for large container ports, housing and fish farms had caused the mangroves to disappear. 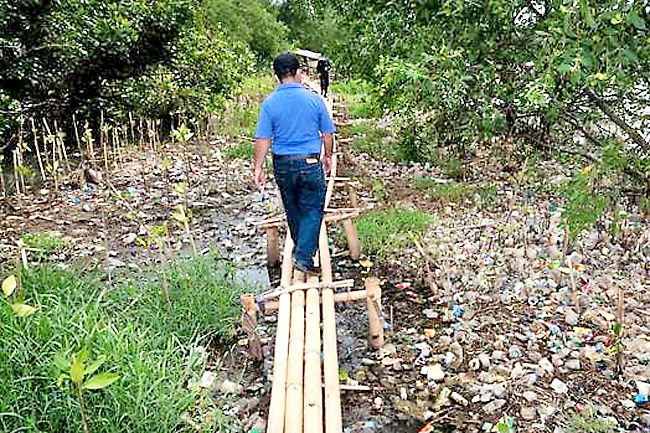 Today, the mangrove trees are confined to several areas, measuring a total of 320-hectare, in the north-western part of the sprawling megacity. These areas are under the protection of the Jakarta government, while there are also mangroves growing in private properties or out at sea in small uninhabited islands and islets. The latter come under the Environment Ministry’s jurisdiction.

The mangrove trees in mainland Jakarta are marked for new destruction, this time from the imminent threat of climate change.

“The waves are getting bigger and bigger and happening more and more frequently,” Djuhana told CNA of the dire consequences of a changing climate.

The waves also bring mountains of trash – mainly plastic bottles, bags and cups – and when they get caught up in the trees’ peg-like breathing roots, the mangroves would suffocate and die.

Climate change is also to blame for more extreme rainfall causing nearby rivers to overflow during the rainy season.

When that occurs, such as the massive fluvial flood which took place early last year, the brackish water in which mangroves thrive, loses its salinity. The floods are sometimes so bad, the trees could be submerged for weeks.

Then there is the rising sea level, high level of pollution in the waters and the fact that some parts of Jakarta, including where the mangroves are located, are sinking at a rate of up to 26-centimetre a year.

“In Jakarta, however, the mangroves had nowhere to go, because all around them, land has been converted into residential and commercial areas,” he said.

Mangrove forests that often line the shorelines across the tropics provide a wide array of environmental services.

They serve as spawning grounds and nurseries for fish and as habitat for a plethora of organisms. Mangroves also protect coastal areas from storm surges and hurricanes as well as erosions.

In Jakarta, mangrove forests act as sanctuaries for the long-tailed macaques and various local and migratory birds, some of which are endangered.

“Mangroves are three to five times more effective in absorbing carbon emission than ordinary trees in the upland areas. That’s why we need to preserve the mangroves in Jakarta,” he told CNA.

Studies from various institutions have shown that mangrove trees and the soil beneath them can store anywhere from 20 to 89 tonnes of carbon per hectare.

“Losing mangrove, however small, has a very significant environmental impact. We will lose the ability to absorb carbon from the atmosphere and all the carbon which had accumulated in trees and soils would escape back into the atmosphere,” Santoso said.

“Losing the mangroves means Jakarta will lose its last remaining sanctuary for biodiversity,” he said.

Today, mangrove trees can only be found in some sections of Jakarta’s Pantai Indah Kapuk, Kamal Muara and Muara Angke areas – all within minutes’ drive from each other – surrounded by busy streets, toll roads, upscale housing areas and tall apartments and office buildings.

In the mid-1990s, the Indonesian government decided to designate these patches of mangrove forests as protected forests and wildlife sanctuaries.

Santoso said in terms of quantity, there are more mangrove trees in Jakarta today than in 1997, when he first began studying the city’s mangrove ecosystem.

“There have been many universities, organisations and businesses donating money and planting mangrove propagules. The mangrove population is increasing but ecologically speaking they are not healthy and getting sicker and sicker,” he said.

Santoso said the rivers which supply freshwater into these ecosystems are polluted by domestic, commercial and industrial waste, with unsafe levels of mercury and lead found in the water and sediments.

“Climate change will cause sea levels to rise. It will cause many areas to be flooded and we could see changes in the type of mangrove species dominating the landscape,” he said.

But the damage caused by sea level rise is nothing compared to the threat posed by land subsidence, which is mainly caused by over-extraction of groundwater.

“Because of land subsidence, the soil now sit 2.5-metre to four-metre (below the water surface) in some locations,” Head of the conservation unit at the Jakarta Parks and Forestry Agency Arie Fajar Septa told CNA.

This causes some species of mangroves to drown and die and makes the process of replacing them with new plants extremely difficult.

“It is hard to directly plant the mangroves into the soil because propagules can only survive in water between 0.5-metre and one-metre deep,” he said.

Djuhana said his team is fighting a never-ending battle against sinking land and changing climate.

Workers have erected breakwaters to protect the mangroves from strong waves and built bamboo fences to stop trash from the sea and rivers from encroaching the delicate ecosystems.

They have also backfilled some sections where land is subsiding to stop mangrove propagules from drowning and give them a chance to grow into full-sized mangrove trees.

“But sometimes the waves are so big that the entire forest would drown. Water would swell by another metre and thousands of trees are destroyed,” he said, adding that storm surges would also decimate mangrove propagules before they have a chance of developing.

However, Djuhana is not giving up. As soon as one section is destroyed, his team get to work to replant it with new mangroves.

“It could take months to replant the mangroves before they take root, and they could be destroyed in a blink of an eye when the storm comes,” he said.