Language is no barrier to environment actions

The collaboration was highlighted at the World Environment Day 2021 celebration at the Baiduri Community Space of the Baiduri Bank Headquarters yesterday in the presence of the AF president, Deputy Head of Mission at the French Embassy in Brunei Darussalam Katia Menargues and Baiduri Bank CEO Ti Eng Hui.

World Environment Day is a day to encourage worldwide awareness and actions to protect the environment. It is the most renowned day for environmental action celebrated annually every June 5 since 1974, calling for urgent action to revive the ecosystem.

This year’s World Environment Day is hosted by Pakistan.

The celebration yesterday began with welcoming remarks from AF Executive Director Elodie Simon-Hick, who shared the initiative to raise awareness of the worldwide event and facilitate the collaboration of Stella’s School (Brunei) and Ecole Victor Schoelcher (French), while showing that be it English or French, a foreign language is not a barrier in communicating and acting positively. A video presentation followed on the works of the involved schools and a documentary preview by BruWILD titled Mangroves of Brunei Darussalam.

French explorer Pierre Sauvadet, who is currently based in Brunei, also shared his 25-year experience in the Arctic, where he led several expeditions and developed polar ships for scientific purposes. 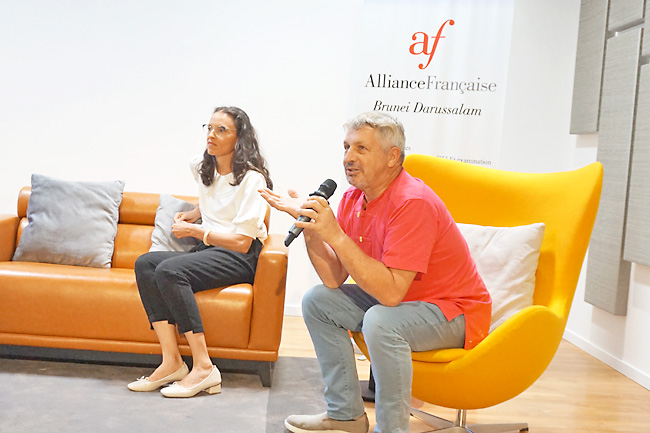 The collaborating schools will be carrying out positive actions in favour of the protection of the environment, including sharing initiatives and learning about each region’s biosphere. They will continue to work together through online platform following yesterday’s event.

Twelve pupils from Year 5 at Stella’s School are involved in the project for World Environment Day where they took a field trip to the mangroves with BruWILD recently.

BruWILD is a biodiversity and natural history society promoting eco-educational programmes, rescuing animals and saving the ocean. They have developed resources with downloadable guides and information available on their website.

Stella’s School Principal Lisa Lee said that through the eco-educational collaboration with BruWILD, students have discovered the mangroves and their unique flora and fauna, to be shared with their French counterparts.

Meanwhile, Baiduri Bank CEO Ti Eng Hui, who is also a member of the AF board of directors, noted that the partnership is a great way to creatively foster cross-cultural exchanges with the unified goal of increasing environmental awareness.

“At Baiduri Bank, we share the same commitment to environmental corporate social responsibility and are honoured to be part of this meaningful activity,” he added.

Last year, Brunei was involved for World Environment Day by organising several activities online and held a ‘virtual run’. In April 2021, Brunei commemorated the celebration of Earth Day, a platform for cultivating environmental awareness and promoting actions to protect the environment with the campaign extended to June 2021, to include the World Environment Day.