LAFC ‘perfect for me’: Chiellini

“I am fully convinced that this club is perfect for me,” Chiellini said in his first official press conference for LAFC, flashing his new number 14 jersey.

LAFC have yet to win a major honour since joining MLS as an expansion team in 2018.

They currently lead the league with 33 points from 16 matches, and are clearly doing all they can to ensure they stay on top.

Since announcing the acquisition of Chiellini two weeks ago, the club have confirmed the imminent arrival of Wales captain Gareth Bale on a 12-month contract that features options through 2024.

Meanwhile, longtime franchise cornerstone Carlos Vela has agreed to an extension through the 2023 season. 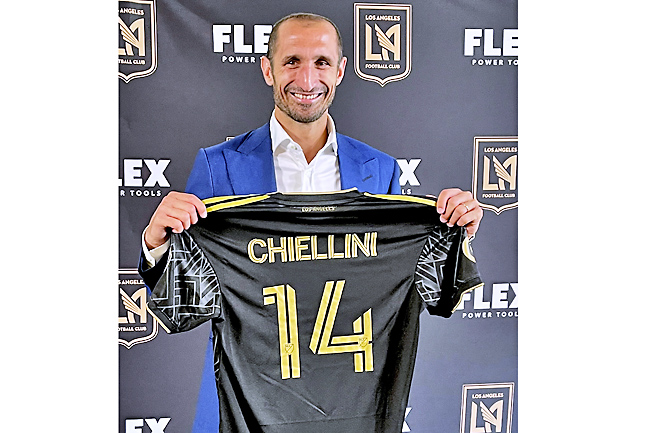 Chiellini, 37, said he believed he had plenty to contribute to the young side, and that his homework had convinced him that he would find MLS a worthy occupation.

“I spoke with Andrea (Pirlo) and Alessandro Nesta and they always talk very well about this league,” he said. “Surely there are some differences.

“It’s a different football from the Italian (league) but every team has its own style.

“This team is perfect for me because is full of young players and they can also help me,” he said. “It’s impossible for me to have the same physical characteristics I had 10 years ago, but I can bring something to them. We have to create a good mix of experience and enthusiasm to became a winning group.”

Chiellini said he’d watched MLS develop for years as he spent holidays in the United States.

“I don’t know what will happen in the next months, but I am sure that will be something that I’ll remember for the rest of my life,” he said. “Los Angeles is a fantastic city that I’m very curious to live in.”

Chiellini left Juve at the end of last season after 18 years at the club, during which time he won nine league titles and four Italian Cups, and twice reached the Champions League final.