THE KOREA HERALD – Korea has recently emerged as an attractive art market on the back of purchasing power of younger collectors, grabbing increasing attention from the world.

Globally renowned galleries are opening galleries in Seoul or expanding their presence in the city. Frieze, a major international art fair, recently announced it will hold the first Frieze Seoul next fall, putting the city on the global market map. Seoul will be the first Asian city to host the fair.

Pace Gallery, the US-headquartered contemporary gallery with eight locations around the world, including two galleries in Asia, recently moved to a larger gallery space in Seoul, occupying two floors of Le Beige Building in Hannam-dong, a posh neighbourhood north of the Han River. The new gallery space will open today with a solo exhibition of American painter Sam Gilliam.

“It feels like it is time to expand in readiness to meet the moment” with younger generations of Koreans becoming more powerful in the art scene, noted President of Pace Gallery Marc Glimcher.

“When we first opened in Korea four years ago, there were glimmers of a new collecting generation coming up. The younger generations in Korea are in the cutting edge of understanding new makers and they understand art’s potential as a change maker,” Glimcher said in an email interview with The Korea Herald.

“I found that super interesting – my personal passion is growing that fire within young people and supporting new collectors with how to build a collection. The generation we saw back then is dominating the collecting world in Seoul,” he said.

Among the new comers to Korea are Koenig Galerie, a German-based gallery that opened in April at MCM’s flagship store in southern Seoul and Thaddaeus Ropac which will open in October in Hannam-dong. 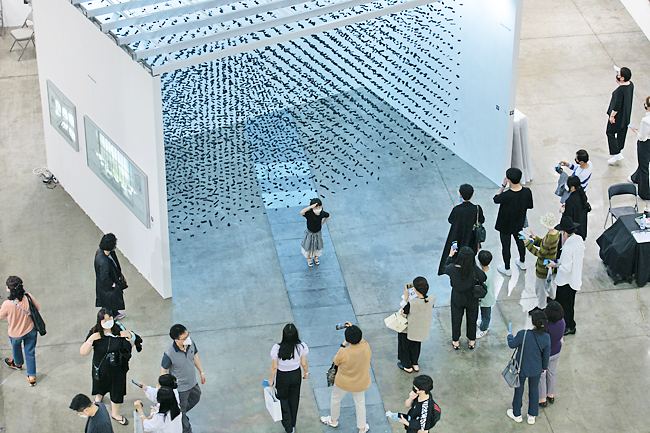 “In recent years, the Hannam-dong district has rapidly transformed into one of Asia’s most thriving cultural districts, recognised both locally and internationally for its continuously evolving position as a hub for the arts and creative activity,” Thaddaeus Ropac wrote on its website. Leeum, Samsung Museum of Art is a stone’s throw away from Thaddaeus Ropac and Pace Gallery.

Lehman Maupin, which runs galleries in New York, London, Hong Kong and Seoul, has also been mulling an expansion of its Seoul gallery into a larger space.

Working with a number of Korean artists, including Lee Bul, Suh Do-ho and Suh Se-ok, led to the gallery opening in Seoul in 2018, “allowing (the gallery to forge) stronger ties to South Korea and its many cultural institutions”, co-founder of the gallery David Maupin told The Korea Herald by email.

“In comparison to other Asian countries, South Korea has one of the most advanced art infrastructures, boasting strong contemporary art galleries, museums throughout the country and three major biennales – Gwangju Biennale, Busan Biennale and Media City Seoul Biennale,” Maupin said.

“Building upon its long, rich history of art collecting, the Korean art market is thriving. The collector base has tremendously expanded to younger generations, and with the announcement of Frieze Seoul, we think the market in Korea will thrive even more now,” he added.

While Korea once rose as a hot art market in 2007, it is different this time. Today, knowledgeable collectors with deeper pockets and a younger generation of collectors are driving the thriving art market, according to those in the art industry.

Local art fairs – including Art Busan, KIAF, Plastic Art Seoul and Galleries Art Fair are reaching new heights, attracting record number of visitors as well as their biggest sales to date amid the growing interest in the art market in the country.

“In the past, Korean buyers tended to buy only works that they were familiar with, for example some renowned Korean artists. But now they study a lot, to the point where they understand contemporary art created by a variety of international artists. While they tended to buy the second best artwork with a relatively lower price tag, now they prefer the best artwork paying more money,” said CEO Byun Won-kyung of Art Busan, one of the leading art fairs in the country.

Some 110 galleries from Korea and abroad participated in this year’s Art Busan, held earlier this month, setting a sales record of KRW35 billion (USD31 million). Among the international galleries at Art Busan was Thaddaeus Ropac that presented Anthony Gormley’s sculptures and paintings by Daniel Richter.

Those works sold out quickly during the preview session, according to the organisers.

Some attribute the latest interest in Korea’s art market to the recent turmoil in Hong Kong, the traditional art hub in Asia, which has international art institutions looking elsewhere in the region.

“South Korea’s art market is estimated at about KRW400 billion, but when ‘invisible transactions’ are included, the art market is likely worth more than KRW1 trillion,” said an official from the Galleries Association of Korea.

Founder of Koenig Galerie Johann Koenig noted Korea has many benefits to running an art business thanks to no VAT or import tax on artworks.

“It is logistically very convenient to trade, which opens up more opportunities and lowers barriers for people to start collecting art,” Koenig said.

“We can observe that the private collectors are fast growing to strengthen the market which is also largely backed by private institutions and foundations,” he said. “I am always on a lookout for great talents, and now that we have a more intimate relationship with Korea, I look forward to discovering more Korean artists,” he said, adding that he’d like to find artists who “push boundaries and are forerunners in their own area.”

Growing interest from abroad in the Korean art market has raised concerns over whether the market is ready to embrace the rapid foreign influx.

With Frieze launching in Seoul, the Korean art market is expected to grow, but some insiders caution that the Korean art industry is not mature enough for this kind of expansion, with many people focussing on popular artists and transactions taking place mostly in the auction market.

Director of Kimhyunjoo Gallery in central Seoul, Kim Hyun-joo who has been running the gallery for 17 years and witnessed fluctuations in the local art industry, believes art culture has certainly improved, but that it still has a long way to go as many art purchases are investment-oriented and many local galleries are shunned by buyers.

“Many people seem to consider the investment value when purchasing works, taking into consideration their popularity at the auction market,” Kim said. “There are so many good galleries here, but many of them are in a crisis. The local galleries’ role is really important in ensuring sustainability as they support local artists in the long run by continuously showcasing their works through exhibitions.”

A Korean painter surnamed Kim, who recently had a solo exhibition at one of the leading galleries in the country welcomed the flourishing art market and the growing international attention, but worried that Korea could remain simply as a market platform.

He said many local galleries were not strong enough to support a healthy art scene and that Korea’s art market still tended to be driven by fads or purchases for investment purposes.