THE STAR – Having very little to do with ministers, though a fair amount of dread is generated nonetheless, Guillermo del Toro’s Cabinet Of Curiosities is a mixed bag of the unsettling and amusing.

The Oscar-winning filmmaker, whose dark fantasies and tales of horror stirred the imagination and now haunt the dark corners of our minds, serves up this anthology that starts well, meanders in the middle and finishes rather strongly.

If you choose to watch its eight episodes in the order of their release, that is. An out-of-sequence sampling may not hurt at all, since every tale stands alone – interpretations of old and new stories by different directors each with a concise introduction by del Toro.

Starting off with the weakest episodes might actually give your overall viewing a more satisfying feel by the time you shut the final drawer of this cabinet.

Ironically, given del Toro’s avowed passion for the works of HP Lovecraft, the two segments based on that author’s works proved really disappointing for me. 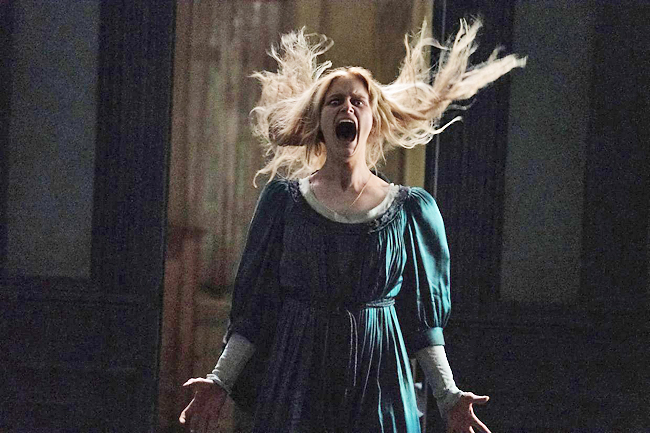 These are: Pickman’s Model (also adapted back in the 1970s for Rod Serling’s Night Gallery), about an artist whose disturbing work consumes another man; and Dreams In The Witch House, where an unwitting, impoverished boarder in an old house discovers the insanity-inducing expanse of the cosmic horrors that lurk in the spaces between our perception.

Both these efforts suffer from showing too much instead of relying on the suggestion and implication of mind-numbing horror that was Lovecraft’s hallmark. Frankly, having Rupert Grint rehash his Ron Weasley goggle-eyed fraidy-cat stare in a Lovecraft adaptation just sent Witch House off on an irredeemable tangent for me.

It wasn’t until I realised that the segment’s director, Catherine Hardwicke, was also responsible for Twilight that the true stroke of genius in choosing her sank in. Well actually, no, I’m just messing with ya. Sharing the pain and all that.

The Cthulhu-proportioned letdowns aside, there are some grisly and amusing entries: half the bunch, to be sure.

Series opener Lot 36 explores the perils of greed and storage unit auctions, while The Outside is a dippy attempt at sociocultural commentary on fitting in that will leave you smirking with an eyebrow raised.

Graveyard Rats is a nifty comeuppance tale, claustrophobic and icky but also startling in its tale of early 20th-Century graverobbing in Massachusetts. Oh, and thanks for the shout-out, Guillermo, but Malaysia wasn’t formed yet in those days.

My senses took a trip back to the 1980s with The Viewing, by Mandy director Panos Cosmatos. If you dug that Nicolas Cage outing, you will find this one quite similar in look and feel.

It’s a strange tale of four “subject matter experts” (before such beings were named), summoned by a reclusive billionaire to just… hang out and chill. But, as our homegrown proverb goes, there’s always a prawn under the rock – and the literal rock, in this case, unlocks a nightmare that zaps us right to the Raiders Of The Lost Ark finale.

The two best entries are tonally different. The Murmuring closes the season with a tale of birdwatching, grief and ghosts, superbly acted by Essie Davis in a tale helmed by her director on The Babadook, Jennifer Kent. It’s a slow burn punctuated by sudden hackle-raising moments and glides towards a possible redemptive ending (but hey, you never know when something really horrible will happen to a Cabinet Of Curiosities character).

If anything dampened my enthusiasm for this one, it was Andrew Lincoln’s (yessir, The Walking Dead’s Rick Grimes himself) somewhat stagey performance.

My favourite: The Autopsy, where a very tired medical examiner (F Murray Abraham) is asked to help an old friend look into a bizarre case involving murder, apparent mind control, and a mining disaster.

It starts out one way and becomes something quite different about two-thirds in, but stands as a testament to courage and sacrifice (and human resourcefulness when faced with powerful, arrogant and annoyingly condescending forces).

If a second season is likely, I’d like to see them tackle the Internet meme where pronouncing the product names of a certain Swedish home furnishing company accidentally summons an ancient demon. Guaranteed to be scarier than the Lovecraft adaptations from this initial batch.