CNA – A knife-wielding man who was shot by the police after attacking random passers-by and charging at officers pleaded guilty yesterday to violence offences.

Soo Cheow Wee, 50, pleaded guilty to four charges including voluntarily causing hurt by using a cutting instrument, criminal intimidation and causing hurt to deter a public servant from his duty.

The court heard that Soo went to Geylang on February 17 and drank cough syrup and diazepam without prescriptions.

He returned to his mother’s house in Clementi and called the police and said someone wanted to kill him and his mother.

He then took a knife, wrapped it in newspaper and left the unit. Soo loitered along a pavement in Clementi, claiming a voice told him to target members of the public. He approached pedestrians, swinging his knife, but most of them managed to flee. Soo slashed a 41-year-old man who was on his evening stroll, injuring his arm.

After this, Soo flagged down a taxi and asked to be driven to Clementi Police Division. On the way, he suddenly opened the rear door and tried to alight while the taxi was still in motion. The driver alighted to check on Soo, who had fallen on the road. The driver saw Soo was holding a knife, and Soo pointed the weapon at him before charging towards him.

Soo was arrested and taken to a holding room. His injuries were not life-threatening, and he was taken to hospital with a gunshot wound. He was later discharged from hospital and has been in remand since. 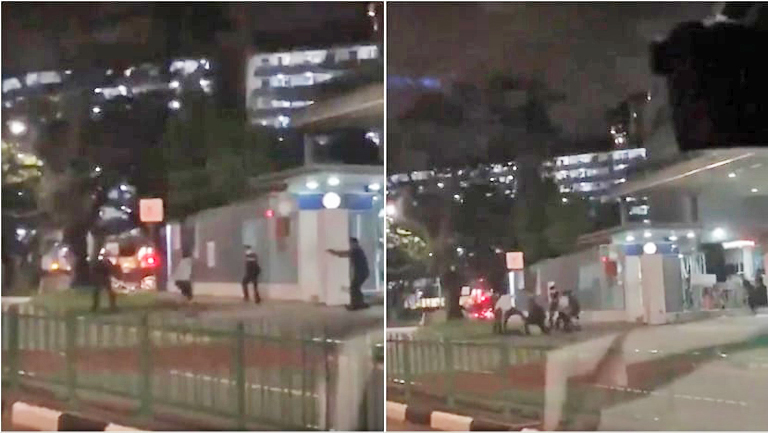