ANN/ THE STAR – It is durian season and roads in Balik Pulau, Penang, are choked with visitors looking for the freshest fruits to satisfy their craving. This used to be a regular affair, but after two years’ break due to the COVID-19 pandemic, locals say they are taken aback by the mad rush to enjoy the choicest pick of the king of fruits.

Housewife Minah Baharom, 55, said she dared not go out of her house on weekends and public holidays now. “It takes more than half an hour to get to town and I live a kilometre away!

“On normal days, it takes less than 10 minutes. I decided to run errands on weekdays now and stay home otherwise,” she said.

A retired teacher who wished to be known only as Hong, 60, observed that durian season in Penang tended to fall during school holidays. She had chosen to leave her home in Balik Pulau and stay with her daughter in George Town.

“By doing this, I avoid the jams here while spending time with my grandchildren,” she said.

PLANNING THE TRIP
Durian lovers like Lee Hong Chun and his friends were among those who travelled to Balik Pulau over a recent weekend to enjoy the king of fruits.

Lee, a 35-year-old administrator, said they attended a durian festival in the area and feasted on different variants of the fruit. “The festival was held from June 10 to 12. 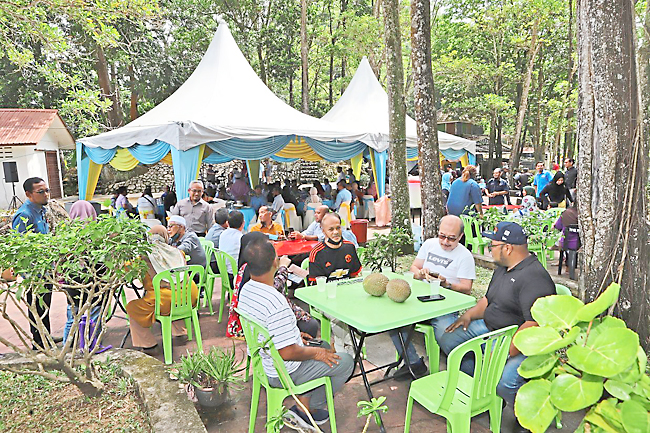 “It has been two years since we got to go to Balik Pulau to eat fresh durian and the five of us ate around three kilogramme of durian,” he said. To avoid the congestion, Lee went to Balik Pulau early in the morning.

“We reached at 9am and I also travelled on motorbike.

“Although traffic was slow, I am thankful that it was moving and not at a standstill,” he said.

A businessman who wished to be known only as Yusoff, 35, drove all the way from Melaka.

“Since it was the school holidays, my wife and I decided to bring our five-year-old son. We don’t mind coming such a long way to enjoy fresh durian.

“Since Melaka would have been packed with tourists, we decided to become tourists in Penang instead,” he quipped.

Yusoff added that although the jam was terrible, he had a great time bonding with his family in the car.

“My wife and I had a good chat while my son watched his favourite YouTube videos.

“We also enjoyed the view while being stuck in the jam.

“It was a great trip and we feel recharged and ready to head back to work now,” he said.

At a popular hilltop Thai restaurant in the Balik Pulau area, a manager who wished to be known only as Boon, 50, said the restaurant no longer accepted reservations on weekends and public holidays.

All customers must now queue up instead. “We have people lining up outside even before we open,” he said. Customers who made reservations, he said, tended to be late due to the bad traffic.

Because the tables were reserved, the restaurant could not serve those who walk in.

“The jam can be so bad it takes 30 minutes to move one kilometre.

“So now we operate on a first-come, first-served basis on weekends and public holidays,” he said.

BOOMING BUSINESS
Durian vendors are, naturally, not complaining. “On weekends, we can sell over 100 kilogrammes of durians,” said Mohd Fazli Abdul Rahman, 39. He said the flow of customers was almost non-stop on weekends.

“Yes, there will be a three to four kilometre crawl from Jalan Tun Sardon to Balik Pulau town. But this only happens once a year during the durian season,” he added.

Mohd Fazli said the weekend jams would continue until the end of July when the durian season ends.

Bao Sheng Durian Farm owner Chang Teik Seng, 62, who also runs a homestay, said the demand for durians was high this year. “We only take in fewer than 20 guests per day, so customers have higher chances of getting premium durians. The private environment we offer gives a better experience when it comes to durian tasting.

“We usually start accepting bookings for ‘stay and eat’ from March 1 every year,” he added.

Singaporean Oscar Tan, 25, was glad he picked a weekday to drive to Balik Pulau. He said traffic was smooth, even though there were more cars on the road than expected. “This is my first time visiting Penang and I was told that durians in Balik Pulau are the best.

“It is definitely a new experience to eat freshly-opened durians on top of a hill,” he said, adding that in Singapore, durians were usually sold in boxes as takeaway.

He was also delighted by how much cheaper durians were in Malaysia, adding that in Singapore, it would cost at least SGD30 (MYR95) a kilogramme for most variants.

Customers like Tan enjoy eating durian at stalls on a hillside while enjoying the view that stretches till the sea.

Some durian sellers have even built small pavilions in their orchards, complete with thatch roofs, for durian lovers to enjoy the fruits with the sound of birds and insects in the background.

An even stronger magnet that draws durian lovers is the large variety of heirloom clones – variants that are grown only in Balik Pulau. A popular clone among locals is the D600, which is seen as a milder version of Musang King that is more moist, with a vanilla undernote.

Another purely Penang clone is the Capri or Kapri, easily identifiable because the flesh is pearl white with no yellow tinge. It is bittersweet without being overpowering.

GROWN IN PENANG
Other Penang-only clones which have captured global attention include the Ang Heh (Red Prawn), Hor Lor and Siao Hong (Little Red), to name a few.

Durian orchards have been bud grafting most of their trees since the 1970s. When a certain tree is found to produce especially good fruits, its buds are grafted onto other durian trees which do not bear fruits of good quality.

When the new branches grow, they produce fruits of the same genetic stock as the originating trees, ensuring the quality is consistent.

Some of Penang’s durian clones have not been formally registered.

Durian orchard owners ascribe names to them such as 747, Ling Feng Jiao (after an actress’ name) and Felicia Khor (after a regular customer who only wanted to eat durian from a specific tree). They tend to offer these fruits to regulars who are discerning fans of the king of fruits. Though there are Musang King trees in Penang, this variant originates from Kelantan and Pahang. Another famous variant, the Black Thorn or Orh Chee, originates from mainland Penang.

Balik Pulau MP Datuk Muhammad Bakhtiar Wan Chik hopes traffic will ease up now that the school holidays are over. “The jams were due to the durian season and week-long school holidays. After a two-year break, durian sellers are enjoying good business. Of course, this brings inconvenience to Balik Pulau residents.

“I have been in communication with authorities such as the police. They have been deploying staff to help direct traffic,” he said.

Bayan Lepas assemblyman Azrul Mahathir Aziz said the Public Works Department (JKR) was preparing a paper on road projects to overcome congestion which would be presented to the state executive council meeting. “Penang JKR has repeatedly proposed such projects since the 11th Malaysia Plan. In the recent state assembly meeting, I stressed on the need for the state to improve roads in Balik Pulau without waiting for Federal Government approval,” he said.