AP – Libya’s powerful, east-based commander announced on Wednesday he was suspending his role as leader of a self-styled Libyan army for the next three months – the clearest indication yet that he may be contemplating a run for president in December elections.

If he runs, commander Khalifa Hifter (AP pic below) would be one of the frontrunners in the December 24 vote but his candidacy is likely to stir controversy in western Libya and the capital of Tripoli, the stronghold of his opponents, mostly extremists.

Hifter’s forces besieged Tripoli in a year-long campaign that tried to capture the city. The campaign ultimately failed last year, leading to United Nations (UN)-mediated talks and the formation of a transitional government charged with leading Libya until the parliamentary and presidential elections.

A statement from Hifter’s office said he was delegating his military duties to his chief of staff, Abdel-Razek al-Nadhouri, for three months, starting yesterday.

Libya has been wracked by chaos since a NATO-backed uprising toppled longtime dictator Moammar Gadhafi in 2011. The oil-rich nation had for years been split between a government in the east, backed by Hifter, and a UN-supported administration in Tripoli, aided by west-based Libyan militias. Each side has also had the support of mercenaries from countries such as Russia and Syria and different regional powers. 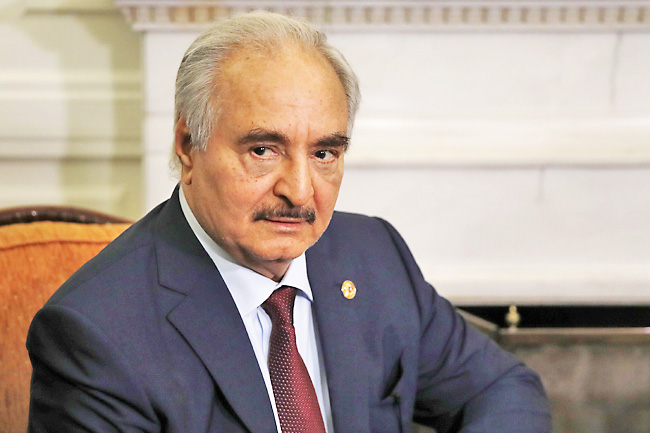 Libyan lawmakers passed a presidential election law earlier this month, requiring possible candidates for president to relinquish whatever office they hold 90 days before the vote. Lawmakers are still debating a bill regulating the parliamentary vote.

However, lawmaker on Tuesday passed a vote of no confidence in the transitional government, impeding efforts to unite the oil-rich North African country and even throwing the long-waited elections into uncertainty.

Jalel Harchaoui, a Libya expert and senior fellow at the Global Initiative, warned that Hifter’s candidacy may lead his opponents to undermine the elections altogether, which could raise the threat of renewed violence. Many armed groups loyal to extremists in western Libya oppose the December vote, he cautioned.

“If real presidential elections take place in northwestern Libya, there will be huge tensions ahead of the contest, including potential clashes,” Harchaoui said.

Hifter has modelled his leadership on Egyptian President Abdel-Fattah el-Sissi, a close ally.

Both have declared war on terrorism – applying the term not only to extremist groups but also more moderate militants.

Hifter, 77, served as a senior officer under Gadhafi but defected in the 1980s during the ruinous war with Chad, in which he and hundreds of soldiers were captured in an ambush.

He later spent more than two decades in Washington, where he is widely believed to have worked with the CIA, before returning to join the anti-Gadhafi uprising in 2011.

Hifter’s prominence rose as his forces battled extremists and other rival factions across eastern and later southern Libya, areas now under his control. He has the support of Egypt and the United Arab Emirates, as well as France and Russia.

Skiing Santas back to shredding Maine slopes for charity