ABU DHABI (AFP) – Defending Australian Open champion Sofia Kenin (pic below) believes the tough bio-secure limits on players at the start of the 2021 season are “harsh” but said she is “happy to be travelling”.

The world number four, who is top seed in the year-opening WTA event in Abu Dhabi which started yesterday, will be kept in a bubble along with her fellow competitors before they all move on to Melbourne for the delayed Australian Open.

They will then be quarantined for two weeks when they will be allowed to leave their hotel rooms for five hours per day to train at Melbourne Park.

“It’s not the most ideal situation,” Kenin said at an online press conference on Tuesday.

“I wish we could go out and walk around the city but we can’t. It is what it is. I’m just happy to be here, I’m happy to be travelling, I’m trying to keep it as normal as possible.

“The rules are quite harsh, but it’s for everyone.” 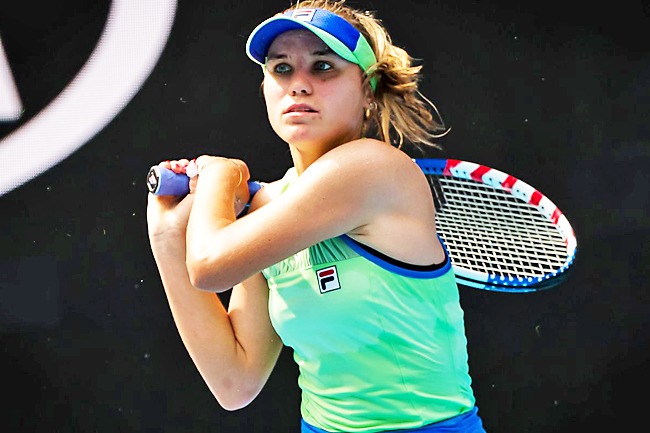 Kenin is grateful for the additional time she has been able to spend on court to prepare for 2021 and is happy there will at least be some fans – 20 per cent capacity – allowed to attend the opening Grand Slam of the season in Melbourne.

Others, however, have been less happy with the restrictions placed on the players.

“I’m not sure when COVID is going to be over but we want our freedom.

“We are professionals and I think we can have the responsibility to be in the tournament but also be responsible at the same time.

“We don’t need this kind of restriction, but what can you do? You have to accept them after all.”

A last-minute decision was made to stage a 500-level women’s tennis tournament in the United Arab Emirates (UAE) capital to give players an opportunity to compete before they hop on special chartered flights to Melbourne.

Players were given exemptions from Abu Dhabi’s mandatory 10-day quarantine but must adhere to strict rules limiting their movement to just the hotel and the tournament site at Zayed Sports City.

The one-off event has no sponsors and the WTA Tour is providing the USD565,530 prize pot. By mid-January, all players participating in the Australian Open will board chartered flights from three locations – Dubai, Los Angeles and Singapore – directly to Melbourne and straight into quarantine.

For the first week, players must pair up and stick to the same practice partner, before adding two more to their closed practice group in the second week of quarantine.

“It’s a new thing, it’s a bit weird, but what can we do? Safety first,” said world number 10 Aryna Sabalenka, who has chosen her doubles partner Elise Mertens as her practice buddy during the first week in Melbourne.

Tennis Australia’s initial plan was to have players arrive in Melbourne by mid-December but restrictions on international arrivals to the state of Victoria prompted a change.

The Australian Open, which normally starts in the third week of January, was pushed back to February 8 and players were forced to adjust their pre-season training regimens accordingly.