ISLAMABAD (AP) – Pakistani engineers cut into an embankment for one of the country’s largest lakes to release rising waters in the hopes of saving a nearby city and town from flooding as officials predicted more monsoon rain was on the way for the country’s already
devastated south.

While officials hope the cut in the sides of Lake Manchar will protect about half a million people who live in the city of Sehwan and the town of Bhan Saeedabad, villages that are home to 150,000 people are in the path of the diverted waters.

The hometown of Sindh province’s chief minister was among the affected villages, whose residents were warned to evacuate ahead of time, according to the provincial information minister.

Over 1,300 people have died and millions have lost their homes in flooding caused by unusually heavy monsoon rains in Pakistan this year that many experts have blamed on climate change. In response to the unfolding disaster, United Nations (UN) Secretary-General Antonio Guterres last week called on the world to stop “sleepwalking” through the crisis. He plans to visit flood-hit areas on September 9.

Several countries have flown in supplies, but the Pakistani government pleaded for even more help, faced with the enormous task of feeding and housing those affected, as well as protecting them from waterborne diseases. 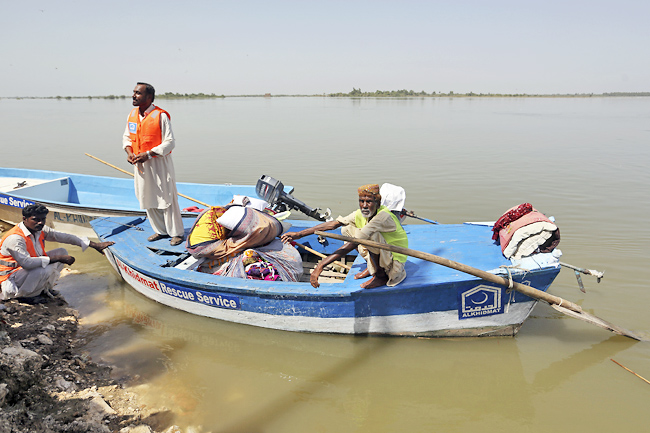 While floods have touched much of the country, Sindh province has been the most affected.

With meteorologists predicting more rain in the coming days, including around Sindh’s Lake Manchar, and its level already rising, authorities ordered that water be released from it.

Sindh’s Chief Minister Murad Ali Shah made the call even though his own village could be flooded, said the provincial Information Minister Sharjeel Inam Memon. The government helped residents of the villages in the waters’ path to evacuate ahead of time, said Memon.

The hope was that the water, once released, would flow into the nearby Indus River, but the lake’s level continued to rise even after the cut was made, according to Fariduddin Mustafa, administrator for Jamshoro district, where the affected villages are located.

Authorities also warned residents of neighbouring Dadu district that they might be at risk of more flooding in coming days.

While the release valve was created in one area, army engineers worked elsewhere to reinforce the banks of Lake Manchar, which is the largest natural freshwater lake in Pakistan and one of the largest in Asia.

In its latest report, Pakistan’s National Disaster Management Authority put the death toll since mid-June – when monsoon rains started weeks earlier than is typical – at 1,314, as more fatalities were reported from flood-affected areas of Sindh, Khyber Pakhtunkhwa and Baluchistan provinces.

The report said 458 children were among the dead.

Rescue operations continued with troops and volunteers using helicopters and boats to get people stranded out of flooded areas to relief camps, the authority said. Tens of thousands of people are already living in such camps, and thousands more have taken shelter on roadsides on higher ground.

A physician at a camp established by Britain’s Islamic Mission in Sukkur charity Hira Ikram said many people had scabies, gastrointestinal infections and fevers.

“With over 400 (children) dead they make up one third of overall death toll. Now they are at even greater risk of water borne diseases, the United Nations Children’s Fund (UNICEF) and other global agencies should help,” he tweeted.

Alkidmat Foundation, a welfare organisation, said its volunteers used boats to deliver ready-to-eat meals and other help for residents as well as animal feed on a small island in the Indus. The group also distributed food and items needed by those living by the roadside.

In the country’s northwest, in Khyber Pakhtunkhwa, the provincial disaster management authority warned of more rains, possible flash floods and landslides in the coming week in Malakand and Hazara districts. Spokesman for the authority Taimur Khan urged residents on Sunday not to go to any of the areas already flooded in recent weeks.

According to initial government estimates, the devastation has caused USD10 billion in damage, but Planning Minister Ahsan Iqbal said on Saturday “the scale of devastation is massive and requires an immense humanitarian response for 33 million people”.