LVIV, UKRAINE (AP) – British journalist Dom Phillips’ quest to unlock the secrets of how to preserve Brazil’s Amazon was cut short this month when he was killed along with a colleague in the heart of the forest he so cherished. Some of his discoveries may yet see the light of day.

Phillips in 2021 secured a yearlong fellowship with the Alicia Patterson Foundation to write a book, building on prior research. By June, he had written several chapters.

“Dom’s book project was on the cutting edge of environmental reporting in Brazil. It was extremely ambitious, but he had the experience to pull it off,” said a close friend and journalist at The Intercept Andrew Fishman. “We cannot let his assassins also kill his vision.”

Phillips’ disappearance and then confirmed death has brought calls for justice from Brazil and abroad from actors, musicians and athletes, along with appeals for help to support his wife.

Phillips would be gobsmacked to learn that his fate has troubled current and former United Kingdom (UK) prime ministers.

He wrote about Brazil for 15 years, in early days covering the oil industry for Platts, later freelancing for the Washington Post and New York Times then regularly contributing to The Guardian. He was versatile, but gravitated toward features about the environment as it became his passion.

Phillips often hiked in Rio de Janeiro’s Tijuca Forest National Park and, atop his paddle board at Copacabana beach, was in his element: floating above the natural world and observing. He might message friends out of the blue, sharing news of spotting a ray with a three-foot wingspan, reflecting a wonder more common among children than 57-year-old men, and he brought that spirit to his reporting. 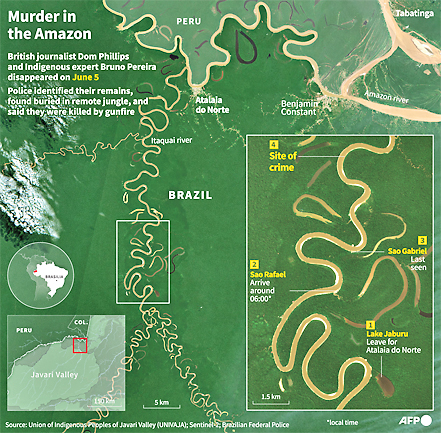 He was curious and thorough, whether parsing studies of projected rainfall decline in the agricultural heartland caused by Amazon deforestation or tracking down the driving test administrator who discovered a man disguised as his own mother to take her exam. He recalled an editor telling him: “You spend too much time researching news stories.”

Among local correspondents, he earned respect for his humility as well, often sharing others’ reportage rather than tooting his own horn.

Phillips claimed the spotlight, inadvertently, during a televised press conference in July 2019.

Noting rising deforestation and that the environment minister had met with loggers, Phillips asked President Jair Bolsonaro how he intended to demonstrate Brazil’s commitment to protect the Amazon region.

“First, you have to understand that the Amazon is Brazil’s, not yours, OK? That’s the first answer there,” Bolsonaro retorted. “We preserved more than the entire world. No country in the world has the moral standing to talk to Brazil about the Amazon.”

Within weeks, man-made fires ravaged the Amazon, drawing global criticism, and the clip of Bolsonaro’s testy response spread among his supporters as evidence the far-right leader wouldn’t be admonished by foreign interlopers. Phillips then received abuse, but no threats.

That didn’t stop him from attending rallies to seek the views of die-hard Bolsonaro backers.

He was alarmed by Bolsonaro’s laissez-faire environmental policy, but mindful that prior leftist governments also had spotty records, often catering to agribusiness and building a massive hydroelectric dam that wrought calamitous local damage while vastly underdelivering. His allegiance was to the environment and those depending on it for survival.

Amazon deforestation has hit a 15-year high, and some climate experts warn the destruction is pushing the biome near a tipping point, after which it will begin irreversible degradation into tropical savannah.

Phillips spoke to farmers who deny climate change even as extreme weather threatens their crops. But he returned from a recent trip with spirits buoyed after meeting some reintroducing biodiversity to their land, said Rebecca Carter, his agent.

After his disappearance, a video on social media showed him speaking with an Indigenous group, explaining he had come to learn how they organise and deal with threats.

“I’m grateful to have coexisted with a man who loved human beings,” his wife, Alessandra Sampaio, told the newspaper O Globo. “He didn’t speak of villains. He didn’t want to demonise anyone. His mission was to clarify the complexities of the Amazon.”

Phillips was also a crisp writer with an ear for readability.

A 2018 story for The Guardian had one of journalism’s most dramatic introductions: “Wearing just shorts and flip-flop as he squats in the mud by a fire, Bruno Pereira, an official at Brazil’s government Indigenous agency, cracks open the boiled skull of a monkey with a spoon and eats its brains for breakfast as he discusses policy.”

Phillips described his 17-day voyage with Pereira through the remote Javari Valley Indigenous territory at that time as “physically the most gruelling thing I have ever done”. This June, he was with Pereira in the same region – it was to be one of his final reporting trips for his book – when they were killed together.

Three suspects are in custody, and police said one confessed. Pereira had previously busted people fishing illegally within the Indigenous territory and received threats.

Phillips, meanwhile, also had been preoccupied with risks to his professional future, betting on a book with wallet-wilting travel costs and praying it would resonate. He had set aside newspaper work to focus on it.

“I’m a freelancer with nothing but a book in my life and not even enough to live on next year while I write it,” he told the Associated Press (AP) in a private exchange in September. “Not so much all the eggs in the same basket as the entire hen house.”

He and Sampaio had moved to the northeastern city of Salvador. He was charged up by the change of scene and teaching English to children from poor communities. They had begun the process to adopt a child.

Sampaio told the AP that she doesn’t know what will become of her husband’s book, but she and his siblings want it published – whether only the four chapters already written or including others completed with outside help. Phillips’ optimistic message – that the Amazon can be preserved, with the right actions – could still reach the world.

“We would very much like to find a way to honour the important and essential work Dom was doing,” Margaret Stead, his publisher at Manilla Press, wrote in an email.

The book’s title was How to Save the Amazon. Bolsonaro has bristled at the idea it needs rescue, saying some 80 per cent of Brazil’s portion remains intact and offering to fly foreign dignitaries over its vast abundance. But Phillips knew the view is different from the forest floor; big hardwood trees have been logged to scarcity in many seemingly pristine areas. His companions travelling through the Javari Valley celebrated when coming upon one.

“The Amazon is much less pristine and protected than most people think it is and much more threatened than people realise,” he wrote to the AP in September.

He noted, with a hint of intrigue, that he recently visited a preserved area of virgin forest full of massive trees. Places like that, he said, were usually inaccessible.

And where is that hallowed ground? “You can read it in the book,” he wrote, “when it comes out.”