Keep on keeping on

MILWAUKEE (AP) – The high winds forecasters warned about are blasting down Wisconsin Avenue, but 15 grandmothers lining up in the street are ready to march.

They’re dressed for the parade in wide-brimmed hats held on tight with elastic chin straps. And they’ve subbed out red pom poms for white ones so the dye won’t run in rain that is teasing its return from a leaden November sky.

“This is like my calling,” said Kathi Schmeling, a retired human resources assistant, her grin framed by the crimson lipstick, a signature of the women who call themselves the Milwaukee Dancing Grannies.

“This is my happy place.”

Given where she and the others have come from, it’s no small accomplishment that they’re here at all.

A year ago, a driver plowed an SUV through a parade in the nearby suburb of Waukesha, killing six people and scarring many more. Four of the victims were from the Dancing Grannies, including their longtime leaders, threatening to extinguish the tight-knit band of women – not old, they said, just well-seasoned – first drawn together by the aerobics craze of the 1980s.

Somehow, they held on. They drew on resilience banked well before the tragedy, during bouts with cancer and divorce, the loss of jobs and loves ones. They accepted that to keep going would require taking a risk on new ways of doing things, with new dancers who had not lived their history. 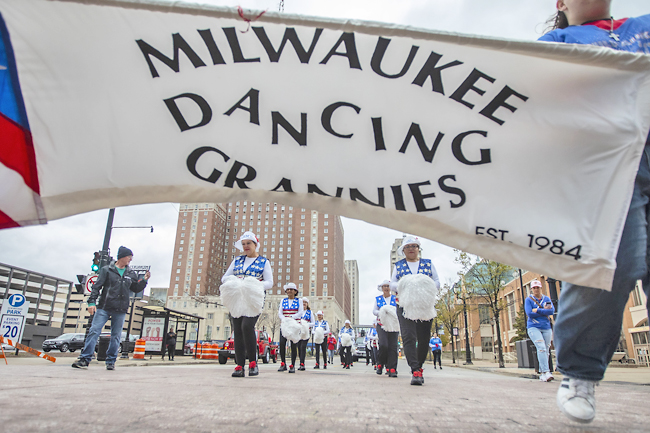 Soon, though, the calendar will come full circle. And to keep moving forward, the group made a decision. When the parade returns to Main Street in Waukesha, they need to go back.

When the speakers atop the group’s sound truck erupt in downtown Milwaukee, the Grannies sashay to a carefree beat: “We are family! I’ve got all my sisters with me!”

Pom poms and lipstick, though, distract from conflicted feelings about the parade a few weeks ahead.

“If we go past that spot, if we (stop to) remember it, if I lose it and start crying…” said Kathy Zdarstek, 77, whose line partner, dancing a few feet away, was killed that night last November.

Others are anxious to return.

“That fool thought he could take my Main Street away from me,” said Donna Kalik, 61, who was a spectator when the Grannies were mowed down right in front of her, then weeks later applied to join the ranks of the survivors. “He doesn’t know who he’s messing with.”

Regardless, every step today brings Waukesha that much closer.

On the phone last November 21, Tamara Durand sounded ecstatic. “I got an earlier flight! I can be in the parade!”

Durand, a teacher and long-ago cheerleader, was the newest Granny. When she showed up in the blue velvet jacket, long skirt and white fur hat reserved for winter parades, though, leader Virginia Sorenson sounded mildly annoyed.

“What are you doing here?” asked Sorenson, 79, who’d already arranged the dancers in even rows.

In recent years, retirements shrunk the group’s ranks to fewer than a dozen dancers. And only eight were slated to march through Waukesha’s cosy downtown, where the annual Christmas parade, cancelled the previous year because of the pandemic, had returned with a new theme: “Comfort and Joy”.

Having a round number of dancers pleased Sorenson, a career nurse who had given up performing since a hip replacement, but remained the leader, equal parts demanding and doting.

“Ginny was our glue – she held the group together,” one of the others dancing that day recently recalled.

With the sun dropping, Sorenson reshuffled the lineup. She would step in to help carry the banner, replacing a granddaughter unable to make it. Dancers arranged in alternating rows would follow the lead of 71-year-old Leanna Owen, the “little firecracker” who managed an apartment complex and was the group’s longtime coach.

In the middle, Betty Streng, a retired systems analyst for the city of Milwaukee dancing in her second parade, would serve as one of the anchors. Durand and two others would bring up the rear.

Families thronged Main when the Grannies funnelled into the procession behind a Girl Scout troop and a youth dance corps. At 4.38pm, they sauntered through an intersection to a crowd favourite, Winter Wonderland, swinging pom poms skyward.

In the din, they didn’t hear the red SUV plowing down Main until it hit them.

A few feet from the curb, Ginny Sorenson lay dead. Hurled to the sidewalk, the bodies of Owen and Durand, both killed instantly, would not be identified until hours later.

In the middle of the street, Streng, 64, lay unconscious and not breathing.

“Wake up, Betty! Wake up!” implored Schmeling, her fellow Granny.

Crouched on the pavement, Peterson cradled Streng’s head, pushing back on her jaw to force open the airway. One touch and he knew the dancer’s skull was shattered. When her eyes fluttered, he lay down to hold her head still until help could arrive. But there were so many victims and when rescuers finally came for Streng, Peterson rushed to aid others.

Nearby, Wilhelm Hospel, the husband of another Granny who was a regular volunteer, lay bruised and battered, and succumbed to his injuries the following day.

Wandering through the chaos, Schmeling found fellow dancer Sharon Millard, a teacher’s aide so invested in the group that she had called to sign up the night before the birth of her first grandchild.

“Kathi!” she said, dazed. “What’s going to happen to the Grannies?”

The pain of the weeks after Waukesha was followed by doubt.

“There’s no leaders. There’s no history. There’s nothing left,” Jeannie Knutson, one of the Original Grannies, recalls thinking.

Two of the dancers were in the hospital, including Streng, comatose for five days afterward with a double skull fracture.

Others nursed hidden scars. Zdarstek kept replaying the choice she made to dance on the left side of the formation – leaving Durand a few feet to her right, in death’s path.

Knutson, who skipped the parade to watch her Green Bay Packers, pictured the spot she would have taken. Listening to survivors during a meetup at the home of a former Granny 10 days afterward, she mulled the route forward. It seemed like they owed it to those who died to keep the group going, or at least to try.

The group chose two Grannies to be their new leaders: Knutson, because of her work in human resources, and Jan Kwiatkowski, a family therapist and ordained chaplain.

The day of Sorenson’s funeral, a group of 15 dancers, retirees and family members went from the chapel to a parade in nearby Franklin, walking silently, arm in arm, in memory of those lost.

“Milwaukee Dancing Grannies are gathering our thoughts, regrouping,” Knutson posted online. The only way to regroup would be to rebuild.

Dozens of notes flooded the inbox of a group that had never added more than a couple of dancers at a time. When they reconvened in late January, 34 hopefuls showed up, forming a dance line that circled the tables of a fraternal hall.

“I felt like we were the rock that they could lean on,” said Doreen Lopez, 66, a native New Yorker who came searching for a way to connect with others in a new hometown. “We all felt the grief and the sorrow for what had happened… but we weren’t emotionally involved, so we thought we could be the strong ones.

By spring’s end, the Grannies were fielding parade invites from around the state. In town after town, spectators shouted their thanks for the group’s return, shaping hearts with outstretched hands.

“It’s bittersweet at times,” Knutson said. “I mean, before the tragedy you’d have crowds clapping and singing along, but now it’s totally different.”

The exhilaration was tempered. When sirens sounded to clear parades routes, some who’d been at Waukesha flinched and others teared up. At a Memorial Day parade, dancers glanced up to see police snipers on rooftops of surrounding buildings.

Then phones began to buzz: a mass shooter in the Chicago suburb of Highland Park, barely an hour away, had turned another holiday parade into a bloodbath.

On television that night, seeing footage of the suburban street littered with lawn chairs and coolers abandoned by terrified spectators felt like a “gut punch”, Kwiatkowski said. Shaken, two of the dancers who’d survived Waukesha stopped coming to practice.

The rest danced on. To Allenton in August with five new members promoted to their ranks. To the Wisconsin Dells in September, with the names of those they’d lost printed inside hearts on costumes echoing the Packers’ green and gold.

When the speakers atop her group’s sound truck short out a few blocks before the terminus of today’s prelude, Knutson and the others know what to do.

They keep count of the beat, even without music. A few mouth the words of the song gone missing, while others maintain carefully lipsticked smiles.

They move to the message Ginny Sorenson long preached.

No matter what, you’ve got to keep on dancing.