ANN/THE STAR – Our sofa is cat central. Target has his giant batik cushion on one end, and both Inkie and Tic Tac sleep on the arms. When we humans lie on it, the cats are happy because they then sit on top of us and have their ears rubbed.

So when our ancient sofa finally collapsed, our first concern was to wonder what kind of replacement the cats would like.

It needed to be traditionally broad rather than fashionably narrow to accommodate Target’s cushion, and it had better be a three-seater to hold us tall humans with cats on top.

Most importantly, we’ve spent the last few years fishing ping-pong balls and other toys from underneath. Therefore, we decided to opt for a sofa with a minimum clear space of 10 centimetres, allowing the cats to retrieve their belongings.

I’ve always fancied a pleather sofa, one of those huge monstrous things that envelops you when you sit in it. Plus, you might simply brush fur and fluff off it.

But as Tom pointed out, Inkie has a habit of sneaking in a quick claw before dinner. He knows it’s not proper, he has two floor-to-ceiling scratching poles, but he still does it. It wasn’t easy, but just like parents give up on their cacti collection when the toddlers start to walk, I sacrificed my pleather sofa dream. 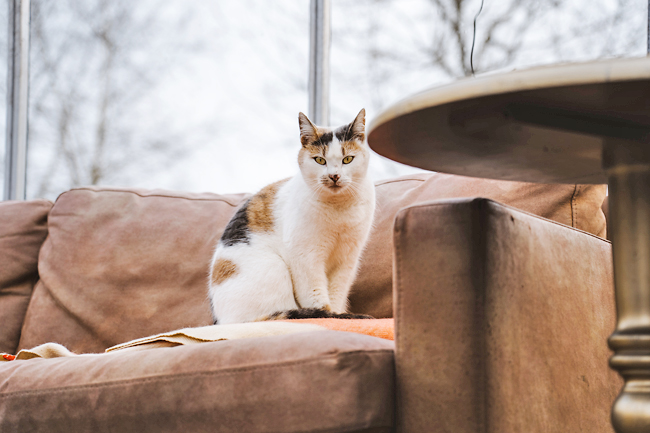 However, after a pause for reflection, and the horrified gasps from my exasperated other half, taste prevailed. A stone grey is sensible and Target’s batik throws jazz it up.

Thankfully, we have a terrific family-owned furniture shop nearby. I texted them, and they told me they had the perfect model in mind, and so we scooted over for a look-see.

It was perfect. They also had a second lovely sofa, but the gap underneath was too narrow for Target, Tic Tac and Inkie to slide underneath easily. Their salesman, Roni, blinked when we told him it wouldn’t suit our cats, but he took it quite well.

A week later, the cats stood on the stairs, tails bushed with horror as the removal men took away their precious sofa. Seeing the new one brought in, they watched with interest as the legs were screwed in.

When the intruders left, all three crept down again.

Target swaggered over and sniffed. Tic Tac was bravely at his shoulder, curiosity trumping nervousness. As the two cats inspected it, I rolled a cunning ping-pong ball under it. Tic Tac stared, reached in a paw and then her little blue eyes lit up. She retrieved it, batting it out and then, with a squeak of joy, she dove underneath. Inkie was with her an instant later.

By the time I settled Target’s cushion on one end, the cats had claimed the new sofa as their own. We bipeds were filled with pride, convinced we’d done a good job, but within days our shortcomings were clear.

First, Target decided that the two stylish buttons in the back cushions were a personal affront. Attacking them with his teeth, he was determined to remove them.

Thankfully, our boy is very loving. I had a word with him, gently putting a hand between his fangs and the offensive buttons, and after two or three times, he agreed not to chew them. He still glares at them occasionally, but a soft no is enough. Inkie is less biddable.

Our tuxie boy upped his casual clawing and started a new game. Lying flat on the marble, he hooked a claw into the cotton and hauled himself swiftly along the floor.

I had a word with him, pointing out that ripping apart furniture is not civilised. From the yellow eyes huge with glee and the loud raspy purr of triumph, I wasn’t getting very far.

Instead of stopping, Inkie dove underneath into the darkness of the cat gap. Lying flat on his back, all four paws in the air, he positioned himself carefully. Then, purrs accelerating, he meowed loudly to signal the claws were in before rapid-clawing down the length of the sofa.

As he emerged at the far end, I tried to scold him but I didn’t have it in me.

By the wild eyes, flat ears and superior purring, Inkie was having the time of his life. It was just too adorable for words, and I ended up laughing and petting his ears as I told him off half-heartedly.

Seeing her brother’s antics, Tic Tac decided to play too. It took her a few days to figure out how to rapid-claw but she’s a dedicated girl and determined to succeed.

So we now have double races where Inkie dominates the dark inside lane and Tic Tac hauls her pretty tail on the outside lane. Target sits above, lording it over both of them from his batik throne.

I’m a massive failure when it comes to discipline but I have come up with a cunning plan.

To save our sofa, I’m distracting our cats by teaching them newspaper games.

I’m building newspaper tents on top of Inkie, encouraging him to burst out from underneath, ripping and clawing the sheets into confetti.

Thankfully, it’s a success. Inkie’s enjoying it, pouncing about with shredded paper in his jaws just like a wild panther, and Tic Tac is joining in with excited squeaks.

It won’t put an end to sofa racing but it will help. The main thing is that we’re all having a lot of fun.