THE WASHINGTON POST – The Secret changed Katherine Heigl’s life. Well, rather, the script for the movie based on The Secret that Heigl didn’t actually end up starring in changed her life. “I had always kind of pooh-poohed it,” she said. “And then I read the script about six or seven years ago, and there was something about it that resonated with me. This idea that we sort of bring about what we think most about.”

Reading The Secret led to reading books on manifestation, intention work, mysticism, crystals and witchcraft. “It’s gone in many different directions,” said Heigl, who was raised in the Mormon faith. “But what it’s mostly helped me discover is, I’m in control. I just feel happier than I did at 35, at 25.”

Tucked inside a small room at her sprawling Utah ranch for this video interview, Heigl radiates warmth. Partly because she’s swaddled in a cowl-necked sweater and partly because her whole body shakes with laughter or rocks with an emphatic nod at a particularly groan-worthy memory. She’s the first to bring up some of the less savoury headlines that have plagued her career and doesn’t shy away from answering whatever questions are lobbed at her, pausing occasionally to sip from a thermos before delivering a new zinger.

The passage of time has been on Heigl’s mind lately. Her new series Firefly Lane arrived on February 3 on Netflix, and sees Heigl play fictional talk show host Tully Hart in her 40s and – through the magic of CGI and soft lighting – her early 20s. “There’s no way I’m pulling off 20 and 22, OK?” she said. 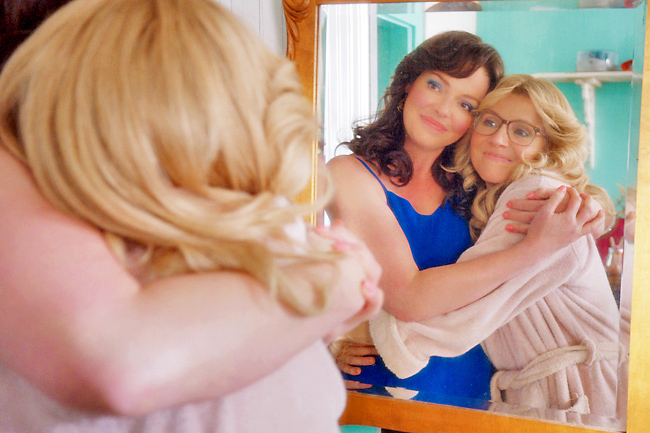 Based on the book by Kristin Hannah, Firefly Lane dives beyond the superficial as it follows Tully and her best friend, Kate (played by Scrubs star Sarah Chalke), through the decades, charting all the trials and tribulations that such longevity brings. It’s a comforting escape of a show, centred on female friendship in all its messy glory.

The way Heigl discusses the relationship between Tully and Kate – a bond that includes fights, periods of not speaking to each other and betrayal – could also describe Heigl’s tumultuous relationship with Hollywood itself. Yes, she did brand her 2007 Judd Apatow comedy “Knocked Up” “a little sexist” and lamented that it painted women as uptight “shrews.” Yes, one year after winning an Emmy for her role as Izzie Stevens on Grey’s Anatomy, Heigl asked to have her name withdrawn from 2008 awards consideration because she “did not feel that I was given the material this season to warrant an Emmy nomination.” And yes, she complained about working a 17-hour day on Grey’s in 2009, when her own schedule was possibly to blame. It was a spate of comments and actions that many decided collectively painted a picture of the worst kind of woman: a difficult one.

“At the time, I was just quickly told to shut up. The more I said I was sorry, the more they wanted it,” she said. “The more terrified and scared I was of doing something wrong, the more I came across like I had really done something horribly wrong.”

(The only time Heigl issued an apology during this interview was for her periodic swearing, admitting, “I haven’t yet addressed that particular issue.”)

But as the years have passed and the world has changed, there seems to be a growing realisation that maybe, just maybe, the Heigl backlash outweighed the crime. In a post-#MeToo world, in a post-Trump world, is it not laughable that so much grief was given to a woman for speaking her mind?

“She has very strong convictions and strong opinions on certain things, and she doesn’t back down from letting you know if she feels like she’s been wronged in any way,” said James Marsden, her 27 Dresses co-star and friend.

“I’ve always seen that as just strength of character. I can see how that can get construed as being difficult or ungrateful or whatever. But if you know Katie, it’s simply because she has the courage to stand behind something she believes.”

And if Heigl’s transgressions happened now, it’s hard to imagine the public reaction playing out in quite the same way. “If she said (some of it) today, she’d be a hero,” her husband of 13 years, the singer Josh Kelley, said in a separate phone interview.

Still, the persistence of the more-than-a-decade-old stigma hasn’t been helped by the fact that Grey’s Anatomy is a specter that never goes away. As the show has plunged ahead through 17 seasons, its off-camera drama gets regurgitated ad nauseam.

And this season, Grey’s has trotted out past stars for top-secret returns, including TR Knight and Patrick Dempsey. But Heigl is unsure if she would ever reappear as Izzie. “I could never say never,” she said. “I think it would just be completely dependent upon the team over there, how they feel about it, and the story.”

After she left the series in 2010, Heigl believes her own team shielded her from knowing about any roles she may have lost out on because of her anointed reputation, fearing such news could have sent her “right over the edge”. But she thinks if she had kept making hits, the tabloid drama wouldn’t have made a career impact.

“You can be the most awful, difficult, horrible person on the planet, but if you’re making them money, they’re going to keep hiring you,” she said. “I knew that whatever they felt I had done that was so awful, they would overlook it if I made them money – but then my films started to make not quite as much money.”

Following her romantic comedy successes with 27 Dresses in 2008, The Ugly Truth in 2009, and Life As We Know It in 2010, box office returns on films like One for the Money and Killers were meager. She went on to chart multiple TV comebacks with the short-lived State of Affairs and Doubt, and joined the final two seasons of Suits after Meghan Markle’s departure. But Firefly Lane is the first of these small-screen projects that actually feels like a return to form, and Heigl has her “fingers, toes, everything crossed” that it gets at least three seasons.

The most crushing shift, Heigl said, was the change in fans’ perception of her. Perhaps that’s why she now constantly replies to strangers’ comments on social media, whether it’s Google-able questions about her new VOD thriller Fear of Rain (out February 12) or sweet photos posted of Grey’s Anatomy-themed birthday cakes or needlework, in which she is tagged alongside a slew of her former co-stars. Heigl is usually the sole celebrity respondent.

“It took me a long time to feel confident enough to read their comments because I just assumed the worst,” she said. “Now, it feels like a little community. I’ve tried to rebuild that trust with my fans through social media, show them more of who I am off camera.”