Juventus crash out of Champions League; Chelsea, PSG through to last 16

PARIS (AFP) – Juventus were knocked out of the Champions League in the group stage for the first time in nine years on Tuesday but Chelsea, Paris Saint-Germain (PSG), Benfica and Borussia Dortmund all secured qualification for the knockout stage with one group game to spare.

A 4-3 defeat away to Benfica in Portugal sealed the fate of a Juventus side who have been in decline in Europe.

Juventus had been knocked out in the last 16 in each of the last three seasons but they have not been eliminated from the Champions League in the group stage since 2013/14.

“I am angry and sad because we are out of the Champions League, but we must think about the league now,” said Juve coach Massimiliano Allegri, whose team are eighth in Serie A.

Benfica are joined in qualifying from Group H by PSG, with the 2020 Champions League runners-up through after crushing Israel’s Maccabi Haifa 7-2. 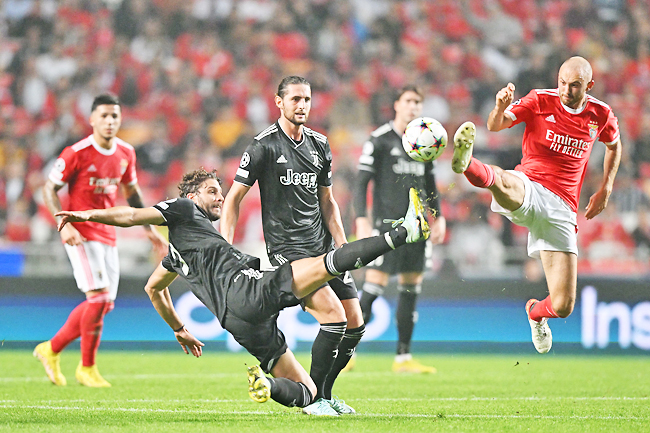 Lionel Messi and Kylian Mbappe both turned on the style, each scoring twice, while Neymar netted once and forced an own goal from Sean Goldberg.

Two-time Champions League winners Chelsea clinched their place in the last 16 as Group E winners, completing an impressive turnaround after they lost their first game to Dinamo Zagreb in September.

Graham Potter’s side won 2-1 away to Red Bull Salzburg, with a stunning Kai Havertz strike 26 minutes from time proving the difference between the teams after Junior Adamu cancelled out Mateo Kovacic’s opener for the Blues.

Victory extended Chelsea’s unbeaten run under Potter to nine games. “That was a fantastic performance from the players,” said Potter.

“I’m delighted to go through with a game to spare considering where we started the competition.”

AC Milan are best-placed to go through with Chelsea after the Serie A champions won 4-0 in Zagreb.