NEW YORK (AP) — Best-selling cookbook author Julia Turshen concentrates on the raw material of each recipe — ingredients, utensils and ounces. But behind the food is something else.

“I’ve always been drawn to cookbooks because I think they’re this remarkable way to share stories,” she says. “I think food is just a vehicle for these stories.”

By that measure, her latest offering, Simply Julia, is as close to an autobiography as a cookbook can be, from her handwritten recipe titles to the inclusion of old family snapshots, photographs of her at home, essays and a peek into her life with every dish.

“The thing that weaves them all together is that they all really have a very personal story attached to them,” she said by phone from her home in New York’s Hudson Valley.

The book is a compilation of 110 healthy comfort dishes, from turkey shepherd’s pie to Hasselback carrots. 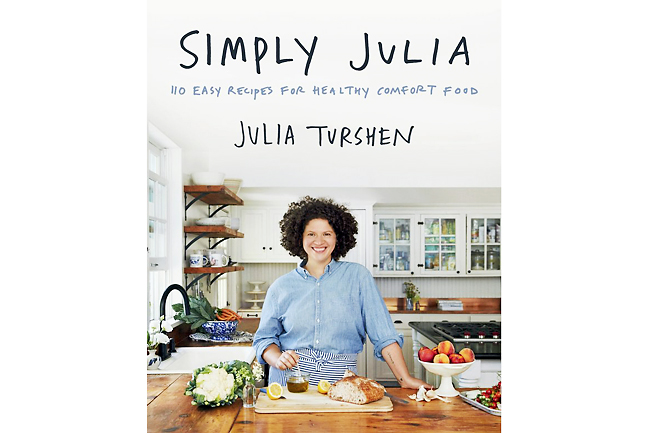 There are 87 vegetarian recipes, 42 vegan ones, a chapter on chicken dishes, and egg-free and gluten-free options. They require no hard-to-find ingredients.

“What concerns me is that I think a lot of people see more difficult, more time-consuming, more expensive ingredient cooking and think that is somehow the goal,” she said. “Food doesn’t have to be difficult or complicated to be good.”

Each dish has a strong tie to the people and places close to Turshen’s heart. There’s a mushroom and barley soup that is her dad’s favourite, a stew from her mother-in-law, cookies from a close friend, and dishes inspired by an aunt and grandparents.

Turshen revealed the muffins she likes after a run, a drink adopted from her childhood babysitter, and sweet and salty peanuts that mimic a taste from her days living in New York City. Readers learn what five spices she considers musts, and the five things always in her fridge.

Editorial Director Julie Will of Harper Wave, an imprint of HarperCollins, said Turshen has a talent for writing for the home cook — with no unnecessary steps, ingredients that are interchangeable and everything very unfussy.

“The point of view is very specific, but I think that the recipes are universally appealing,” Will said. “Who doesn’t want to know how to make delicious, healthy comfort food that is relatively easy to make?”

Will, a longtime fan of Turshen, said she saw the new book as an opportunity for the chef to be more front and centre, with her name in the title and her face on the cover.

“It felt like it was time for Julia to be more fully recognised as the authority in the space that she is in and for her to have the opportunity to do something that felt a bit more personal,” said Will.

Turshen started the latest book with the notion of offering 10 chapters – like breakfasts, vegan one pots and weeknight dinners – each with 10 recipes. But soon each chapter grew to 11 dishes.

“I always want to give a little extra,” she said. “