Journey of a lifetime

ANN/DAWN – For the longest time, Karomber lake was this magical place I had heard about on several occasions. For me, it was a blue water lake, hidden somewhere in the Pamir mountains in the wild northwest of Pakistan.

I had always imagined Francis Young husband or George Hayward trekking through Yasin valley into the Pamirs on their way to Russia, during the 19th Century’s Great Game between the British and Russian empires. Similarly, the stories of tough, stone-faced Russians looking down into the Gilgit agency standing atop the Pamirs would make all this a Victorian Game of Thrones story.

It was a mystery to be unveiled and last summer, I finally arrived in Chitral after a 14-hour drive from Lahore.

The road to Chitral is in pretty good shape, with the exception of an hour’s worth of a broken patch near Drosh, after crossing the 10-kilometre-long Lowari tunnel into Chitral valley. We had dinner in the lovely gardens of Fokker Friendship restaurant on our way to Hindukush Heights owned by the friendly Siraj-ul-Mulk.

Siraj is a scion of the royal family of Chitral and runs the hotel like a home with ancient artefacts adorning the walls, making you feel like you are walking through a well-kept museum.

We had a long way to go so we went to sleep early that night, but not before we watched the hotel’s own lone wolf roaming around the lawns.

Siraj was kind enough to give us a detailed briefing on our journey to Karomber and along with the advice, also loaned us the toilet tent. After about four hours of some rough jeep driving, we arrived at the historic Mastuj Fort.

The fort belongs to Siraj’s family and they have converted it into a lovely abode with beautiful orchards, lawns and chalets. We were already in contact with a local driver, Essa Khan, who was supposed to take us to Maidan, the last permanent hamlet on the way to Karomber. 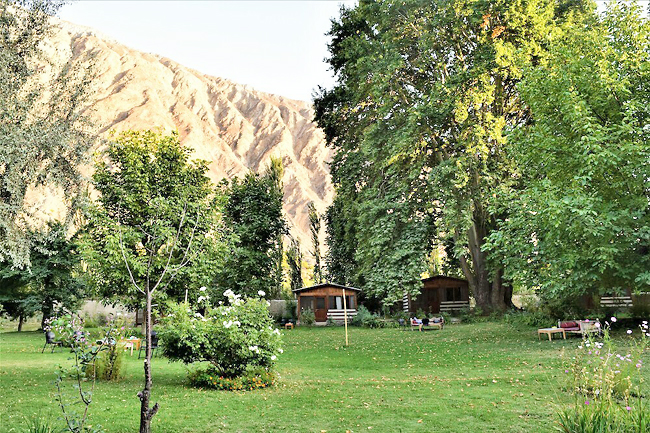 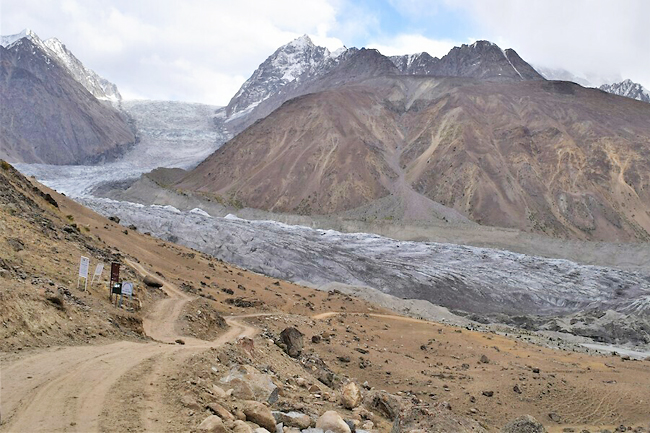 THE JOURNEY IS THE DESTINATION

Essa Khan arrived promptly at 6am in his beautifully decorated 1960s vintage willy Jeep. After loading our luggage and tents, we jumped into the jeep and started the gruelling, back-breaking 12-hour journey to Maidan.

Soon after starting the journey, the road gave way to a dirt track that wound its way through several villages shaded by poplar or eucalyptus trees, and was occasionally punctuated by water streams.

Along the way, one thing that dawned upon us was that the Chitralis take their education seriously, as was evident from the immaculately kept school buildings and the condition of the villages themselves.

Between the villages, the dirt track was largely surrounded by barren boulders and rocks, shining under the full glaze of the sun. In around two hours, we reached the small town of Power, named after a micro hydroelectric power plant, where we stopped for breakfast.

Here, Khushi, our chef for the next three days, also jumped into the jeep and off we went.

We were now traversing through the Yarkhun valley, which means “friend’s home” in Wakhi language – in retrospect, the name sounded to us like it may have had something to do with the inhospitable nature of the valley in times gone by.

Maqsood-ul-Mulk, of Ayun Fort, told me that until some years ago, their jeeps would only go as far as Mastuj and from there, they would trek on foot for days to reach Maidan to venture into Karomber Valley, Wakhan and beyond into Tajikstan. Each year, foreigners would venture into the wilderness to make this trek, but not anymore.

Perhaps our drift towards intolerance and the geopolitical situation in Afghanistan has made cross-border trekking almost impossible.

Our next stop was at Lasht – at the end of Yarkhun valley – where Samsaam, the amazing host, treated us to tea and snacks.

One thing that stood out in this part of the journey was that there were around 10 military check posts along the way and we had to register at every post with the Chitral scouts.

Nevertheless, a helpful duty officer was present at each check post and the process was seamless.

Once we had gulped down our tea at Lasht, we left for the remaining six-hour stretch of our journey and entered the famed Baroghal valley. It was late September and the beautiful colours of autumn were everywhere.

Through this leg of our journey, we were traversing along the Baroghal river, whose tributaries all have interesting names. What starts as the Baroghal river at Karomber, goes on to become the Yarkhun river and then the Chitral river, before being renamed Kunar as it crosses into Afghanistan. It then changes again to Kabul river before entering Pakistan and then finally merging into the mighty Indus near Nowshera.

The river has been flowing here for centuries and is perhaps the best custodian of the histories of Pakistan and Afghanistan and also a measure of how the destinies of the two countries are deeply intertwined. We crossed several small villages on the way and could see a school and a health facility in almost every village. The drive was generally decent, wide and level enough for experienced drivers to navigate on.

It was around 4pm when we reached Maidan where the Chitral Scouts have a small fort. It is perhaps the northern-most presence of Pakistan’s law enforcement agencies, going by the map. Beyond this point, we were almost on our own.

After getting ourselves registered, we chugged forward towards Lashkar Gaz, another hour’s journey from Maidan, where a retired subedar of Chitral Scouts has set up a makeshift guest house.

The guest house was very basic but when you have been travelling for 12 hours in a back-breaking jeep ride, all you need is a place to lie down and the guest house provided exactly that. Lashkar Gaz is the final starting point for the trek to Karomber, and though jeeps have recently started venturing further, almost up to Karomber Lake, the Khyber Pakhtunkhwa government would do well to prohibit this practice, lest the gorgeous Karomber Lake meets the same fate as Lake Saif-ul-Mulook.

We woke early the next morning to start the trek. Our luggage was loaded onto three mules, and we bid goodbye to our host before starting the eight-hour trek to Karomber.

There is only one small hamlet, Ishwar Sher, beyond Lashkar Gaz, but we continued on without stopping to rest.

Interestingly, our guide pointed out some ruins of a Topkhana (armoury) – perhaps a relic from the times of the 1980s Russian invasion of Afghanistan.

The valley was strewn with small and large water channels spread like a delta, originating from Karomber lake far above as well as glaciers from the surrounding mountains. There was not a tree in sight for miles as we walked and walked and rode mules when we got tired.

As we trekked along, the only living beings we came across were a herd of yaks (a kind of mountain buffaloes) and their shepherds.

It was time for them to move down to more temperate weather, so they were migrating down the valley. We also saw numerous marmot holes, but apparently they had already gone into hibernation for the winter.

Interestingly, most of the local people, including our porters and the shepherds, were of Tajik stock, their ancestors having migrated to this side of the Wakhan sometime in the not-so-distant history.

Throughout this leg of the journey, the weather was sunny but comfortable. We had planned to camp an hour short of Karomber Lake as the temperature around the lake itself and its surroundings can drop considerably during the night.

After finding a decent site near a stream, our porters – two young boys – efficiently set up the camp and prepared tea. I was amazed at their survival skills, such as starting a fire by finding yak dung as there was no wood around.

We were tired after some seven hours of trekking, but we wanted to see Karomber Lake on the same day and return to our campsite.

We started for the final leg of our journey towards Karomber Lake and crossed a couple of small turquoise green lakes on the way. The mountains all around us were covered with fresh snow. It was around 3pm and was already getting quite cold.

Soon enough, we could see glimpses of the vast blue lake from afar. We were excited and adrenaline helped our pace towards the lake. Not long after, we found ourselves before the vast blue Karomber Lake spread over several kilometres, nestled among tall snow-covered mountains.

The water was so clear that we could even see the pebbles at the bottom of the freezing cold lake. There was not a single soul in sight except the five of us and all we could hear was the wind breezing through.

For all our excitement along the journey, the group suddenly went awfully quiet as we took in the sight before us.

Each of us sat there, lost in our own thoughts – about our lives and priorities, successes and regrets. We must have sat like this, breathing in the chilly air, for almost an hour.

Finally, it was time to go back to the campsite. We started walking back and there soon came a turn where we could not see the lake anymore. I stopped and turned around to say goodbye to one of the most amazing sights my eyes shall ever witness. At this moment, it struck me that I may never be able to come to Karomber again. Mountains have this uncanny way of making you both humble and grateful at the same time.

It was already getting dark when we reached our campsite. We were hungry and dreaming of the excellent daal chawal our chef was supposed to prepare while we were gone.

Unfortunately, though our chef was a great guide and human being, we soon realised that he didn’t have much in the way of cooking skills, especially at 14,000 feet.

So we ate jam and cream cheese with bread for dinner and that was perfectly cool. We were suitably prepared for the harsh cold night with air mattresses and sleeping bags – a word of caution here: never let your feet get cold as it would take hours for them to be warm again even if you have woollen socks. As long as your feet are warm, you are good.

After an eventful night, with more than one of us hallucinating about a possible snow leopard, bear or even a marmot trying to tear apart our tent in search of food, we woke up early the next the morning. After tea and another round of toast and jam, we started off on the trek back to Lashkar Gaz.

The walk back was mostly downhill, so heavy on the knees, but still better than the way up. We could see herds of yaks in the distance, along with the occasional shepherd, but not many souls in this wild west. In about seven hours, we arrived back at Lashkar Gaz, where Essa Khan was waiting to take us back to our mundane city lives.