THE WASHINGTON POST – Preparations for a Southern election are beginning to face fresh obstacles.

Polling places are to be moved or removed and, according to at least one American leader, Jim Crow is “alive and well”.

That description is not of the political actions this month in Georgia, but rather from a longtime Georgian leader in his forthcoming chronicle of the civil rights movement set in the mid-’60s.

If it is true that history doesn’t repeat itself but often rhymes, then the late congressman John Lewis will be returning to the national bookshelves this summer as a graphic-
novel poet.

Abrams ComicArts and Good Trouble Productions have announced that the Lewis memoir Run: Book One – a sequel to the best-selling March trilogy – will be published on August 3.

The civil rights icon completed the story before his death last July at 80, collaborating with March co-authors Andrew Aydin and artist Nate Powell, as well as a new member, Dallas-based illustrator L Fury, making her debut as a graphic novelist.

The cover by Powell and Fury reflects the escalation of events after “Bloody Sunday” in Selma and passage of the 1965 Voting Rights Act – as some run from or toward racist violence, and some run for office. 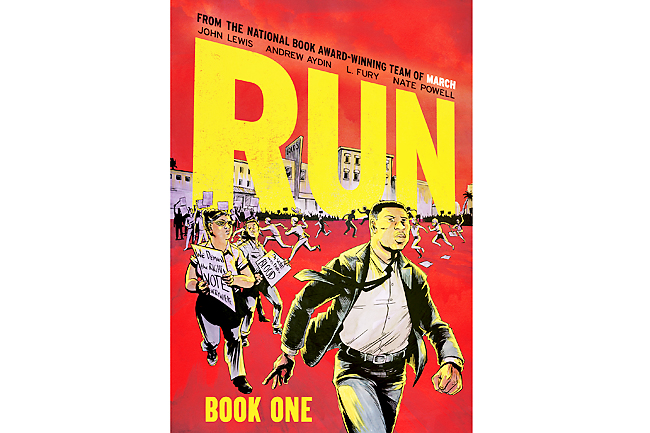 “The reason it’s called Run is because first you march, then you run,” Aydin said by phone last week.

“It’s about showing how a young person like John Lewis can go from being well-known but seen as largely radical by the vast majority of the American republic to being a
public servant.” The March books received critical acclaim – including the first National Book Award for a comic book – while also popularising and contextualising a favourite Lewis phrase to urge non-violent civil disobedience: “Make good trouble.”

“I think the congressman, particularly in the last four of five years, had his eye on how we can inspire and motivate this new generation to participate in the democratic process not just as voters, but as public servants,” said Aydin, who also worked as Lewis’ digital communications director. As he speaks on Friday, the hashtag #GoodTrouble is trending on social media, in response to a sweeping new elections law signed by Georgia Governor Brian Kemp, a Republican, and lambasted by the White House. Some critics said the law could disproportionately affect Black voters.

The purpose of Run is “to show people that the mission did not end with the signing of the Voting Rights Act”, Aydin said. “Turn the page, and the story became a new chapter in the same struggle. Often we celebrate the great victory and forget what happens next.
“When you consider what is happening today,” Aydin continues, it is “urgent that we tell this next chapter”.

Run: Book One focusses on the sociopolitical strife in 1965-66, as Student Non-violent Coordinating Committee founding member Julian Bond runs for Georgia office and Lewis hews to his non-violent philosophy yet loses his SNCC chairmanship to Stokely Carmichael.

Meanwhile, the segregationist violence continues, including the Mississippi murder of a wealthy Black businessman by the Ku Klux Klan. Aydin said the longtime Georgia politician was uplifted by how many young readers embraced his life story in illustrated form.

“They gave the congressman this reinvigorating energy – at conventions he got energy from them – and that’s how he knew he was on the right path.”