‘Joe Ferrari’ does not want to appeal verdict

THE STAR – The family of the former Nakhon Sawan police station chief yesterday informed the Central Criminal Court for Corruption and Misconduct Cases that he wants to waive his right to appeal against a primary court ruling.

The mother of Pol Colonel Thitisan Utthanaphon, alias “Joe Ferrari”, asked the court to issue an order so he could start his prison sentence without waiting for any ruling from the appeals or supreme courts.

On June 8, the court sentenced Thitisan and five other cops to life imprisonment and another to five years in jail after convicting them of torturing a drug suspect to death last year. The court held Thitisan and the five responsible for the death of Jirapong Thanapat, a drug suspect who was detained at the Muang police station from August 4 to 6 last year before he died of suffocation.

The case made headlines when well-known lawyer Sittha Biabungkerd exposed a video clip of Thitisan and five other police officers taking part in covering Jirapong’s head with a black garbage bag in the police station. The clip showed Jirapong was choked with the plastic bag until he collapsed into unconsciousness before the police officers rushed him to a hospital, where he was pronounced dead.

The seven suspects are being detained at the Bangkok Remand Prison pending their decision whether to appeal against the ruling or not. The six other suspects have yet to make a decision.

Thitisan’s mother Chantha said her son felt remorse for what he had done so he would accept the ruling without appealing against it.

Thitisan’s younger sister said her brother wanted to take responsibility for his actions so he preferred that his prison sentence commence immediately. 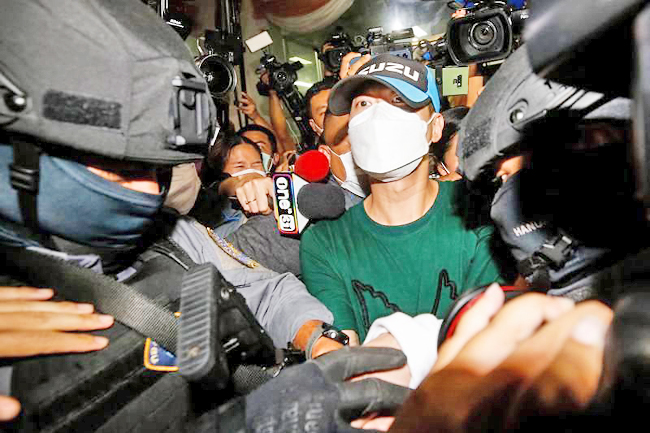