THE WASHINGTON POST – Sometimes a book is so eager to take readers behind the scenes that it neglects to spend enough time on the scenes themselves. This is often so with works chronicling presidential elections, obsessed as they are with the machinations of high-priced operatives, the strategising of rival campaigns or the “optics” of who stands where on a debate stage. Read enough of them and it gets hard to discern whether that is all the authors choose to emphasise, or if that is all there really is to see.

Lucky, a brisk and detailed account of the 2020 presidential race by political journalists Jonathan Allen of NBC News and Amie Parnes of The Hill, is the first volume to tell the story of this unusual electoral contest, with several competing works scheduled later this year and into 2022.

Four years ago, Allen and Parnes co-authored the best-selling Shattered, an examination of Hillary Clinton’s failed 2016 campaign, in which they placed the blame largely on the ineptitude of the losing side. In this sequel, they are only slightly more generous with the Democratic nominee.

Joe Biden won, of course, but mainly because he “caught every imaginable break”. He was the “process-of-elimination candidate”, emerging from a crowded set of more exciting Democratic contenders. He was “lousy in debates and lackluster on the trail”, prevailing despite “a bland message and a blank agenda”. Biden, they argue, got lucky.

The fiasco of the Iowa caucuses, where the app designed to report the results failed miserably, temporarily obscured Biden’s fourth-place showing. “This was a gift,” a campaign aide later explained. Luck returned when rival Democrats such as Pete Buttigieg (who ended up winning Iowa) and Mike Bloomberg (who won American Samoa) suffered debate night takedowns by Amy Klobuchar and Elizabeth Warren – and when Biden survived his own hit from Kamala Harris over his past positions on school busing and desegregation. (That almost cost Harris the subsequent veep nod, Allen and Parnes report.) Fortune smiled again when the entire Democratic Party establishment rushed to Biden’s side after his victory in the South Carolina primary, even if it was less about devotion to him than panic that Bernie Sanders might secure the nomination. “On Super Tuesday, you got very lucky,” President Donald Trump told Biden at their first debate. The Democrat did not disagree. 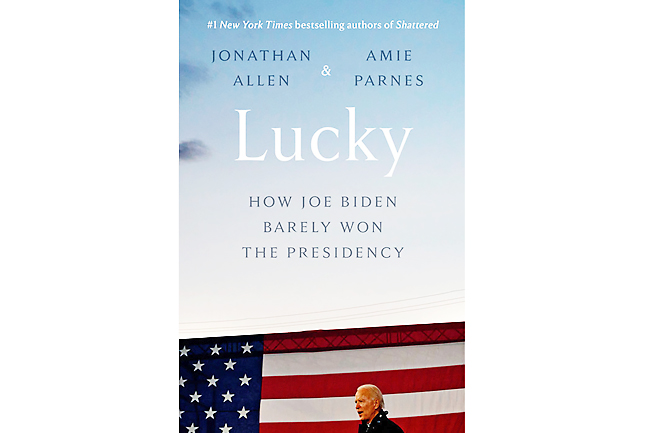 But Trump offered his rival some luck, too, when the president failed to deal effectively or humanely with the coronavirus pandemic. Allen and Parnes quote then-senior campaign official Anita Dunn, now a White House adviser, discussing how the outbreak affected Biden’s prospects. “COVID is the best thing that ever happened to him,” she told an associate early in the crisis, according to the authors. It’s a cynical way to regard a disease that would go on to take the lives of hundreds of thousands of Americans, even if it was, they write, what Biden campaign aides “believed but would never say in public”. Well, it’s public now.

Such blunt, insidery talk is the lifeblood of Lucky. Biden campaign pollster John Anzalone, for instance, worries about the vagueness of his candidate’s speeches. “No one knows what this ‘soul of America’ means,” he complained. At a New York event with Black corporate leaders in the fall of 2019, Barack Obama praised Warren’s candidacy and listed several reasons Buttigieg couldn’t win.

“He’s 38, but he looks 30,” the former president said, eliciting laughs in the room. “He’s the mayor of a small town.” And top Sanders campaign adviser Jeff Weaver chewed out fellow adviser Chuck Rocha as the early Nevada primary results came in. “Where are the Latinos? You spent three million dollars. Where are the Latinos?” A simplistic focus on identity is evident throughout the Democratic field, with new aides often hired to make staff look young and more diverse – only to complicate things by, you know, having ideas of their own that diverged from those of entrenched advisers.

Allen and Parnes portray a Biden campaign split along “deep fault lines mostly based on generation, race, ideology, and time in Bidenworld”. Biden was in the middle of it, in every sense, hewing to centrist positions on healthcare, racial justice and law enforcement, no matter the pressures from his campaign team and his party. He may not have been “Sleepy Joe,” but he remained “Unwoke Joe”, Allen and Parnes quip. “That was the ugly truth many Democrats had to face in the aftermath of the 2020 election: To beat Trump, they had to swallow their progressive values and push forward an old white man who simply promised to restore calm.”

That “simply” is a little deceptive. The 2020 race transpired against the backdrop of a deadly pandemic, widespread racial-justice protests and threats to American democracy emanating from the presidency itself. In Lucky, such context matters largely to the extent that it affects the candidates’ rhetoric and fundraising. (George Floyd’s death, for instance, required some “nimble positioning” by Biden, Allen and Parnes write, trying to keep both moderate White voters and party activists happy.)