THE WASHINGTON POST – In a world increasingly lived online, there is a grounding comfort to Jo Ann Beard’s refreshingly analog voice.

This isn’t to say her writing isn’t relevant or that her language doesn’t wow. Beard’s power comes from phrasings and insights that aren’t just screaming for likes. Few writers are so wise and self-effacing and emotionally honest all in one breath.

Beard is best known for her 1996 New Yorker essay, The Fourth State of Matter, in which she chronicled a horrific shooting at the University of Iowa Physics Department where she was journal editor.

Widely studied and taught, Beard’s masterpiece swerves from the banal to the sublime with profound humility and unvarnished detail:

“I have to stand in the bathroom for a while and look at myself in the mirror,” Beard wrote of hearing the fate of her colleagues. “I’m still Jo Ann, white face and dark hair. I have earrings on, tiny wrenches that hang from wires. In the living room she’s pronouncing all the other names. The two critically wounded are the administrator and her assistant. … The administrator is already dead for all practical purposes. … I can’t get my mind to work right, I’m still operating on yesterday’s facts; today hasn’t jelled yet. ‘It’s a good thing none of this happened,’ I say to my face. A knock on the door, and I open it.” 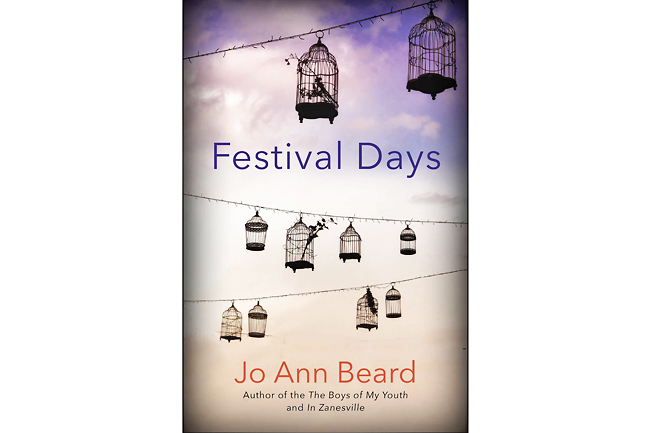 Her new book, Festival Days, dwells in similar terrain – the fragility of life, the tenacity of survival.

As she did in her 1998 book The Boys of My Youth, Beard introduces readers to the makeup of her days: its players, beloved dogs and Grateful Dead albums. Over the course of nine beguiling pieces – which seamlessly meld observation and imagination – she effects an intimacy that makes us want to sit on the rug and listen.

The collection opens with Last Night, about her elderly labrador on the eve of her euthanisation. Of her dog’s final hours, Beard wrote, “She began turning in circles and couldn’t stop.” In setting the tenor of the book, this sentence serves as a kind of reading map. If obsession is a writer’s fuel, Beard is powered by the “beautiful and stupid” acts of hanging on and letting go.

Every line builds thematic texture, instructing us on how to read, and what to take from it all. Seemingly unrelated phrases advance Beard’s ethos.

Festival Days is “brutal and routine,” a meditation on the “dirt-coloured scraps of hide and humanity.”

In Werner, 36-year-old Werner Hoeflich returns from his job to find his apartment on fire. As it burns, Werner’s mind takes him to his hometown of Eugene, Oregon. Past and present conflate.

“He could see smoke curling up through the floorboards, black specks inside the tendrils like a flock of birds banking and moving together.”

Memories of gymnastics of his youth spurs his leap to survival into the adjacent building. “Every moment of your life brings you to the moment you’re experiencing now. And now. And now.”

Beard flawlessly captures the fluidity of time. A minute becomes an eternity. Linearity collapses like a fallen souffle.

Festival Days, the stunning final set piece, swings from Arizona to Udaipur in India, and on to New York, as Beard grapples with death, betrayal and love.

In The Tomb of Wrestling, which hinges around a violent home intrusion, Beard freezes on a salient detail that humanises victim and perpetrator.

“He had a piece of individually wrapped cheese in his hand when he whirled around. She was actually embarrassed about that cheese, had put it in her shopping cart with the idle thought that she’d better not run into anyone she knew or it would be revealed that she sometimes broke down and bought cheese food instead of cheese, just for the sheer laziness of peeling the cellophane away.”

Beard, who teaches creative nonfiction at Sarah Lawrence College, imagines her way into anything. An assailant. A duck. A dying woman. If her essays read like stories that’s because she is less concerned with cold accounts, and drawn more to detail and interiority and the choices people do and don’t make.

Like Werner, her piece on Cheri Tremble, who enlists Dr Kevorkian’s assistance, contains exquisite pockets of intimacy that Beard did not directly witness. Invention allows her to excavate a deeper truth.

Maybe It Happened offers a homage to the subjectivity of narrative recall, while Close and Now brim with indispensable notes on craft: “So this is how you write. You let the writing lead and you simply follow, letting the memories and the images and the language take over.”

Details unfold onto each other. When a stranger boots Beard’s geraniums, it’s “like kicking someone’s grandmother.” And we’re off: from broken pots to a broken nose, to the shadowy vision of a grandmother who pinned linens to the line and used a chamber pot. Because that’s how the mind works, especially in the dissociative throes of trauma.

Beard navigates the darkness with her signature wit. When Cheri’s daughter comes to stay with her, “It’s a slumber party minus the fun.” As for Dr Death, “Kevorkian sounds just like a regular doctor, only sympathetic.”

The night her dear friend Kathy dies, Beard’s duck house is ravaged by wind and the ducks are killed by a raccoon.

In relaying this detail, Beard, for all her creative liberty, quips, “you can’t make this … up.” Because, ultimately, life is like that: rife with indelible metaphor, and more startling in its poignancy than any fiction.