THE WASHINGTON POST – Fourteen months into a worldwide pandemic, this may be the last book you want to read.

Jim Shepard’s new novel, Phase Six, takes place not too far in the future. He imagines that we learned nothing from COVID-19, which feels like a fair assessment of a half-vaccinated nation still bickering about Donald Trump’s chaotic mishandling of the crisis.

In Shepard’s terrifying scenario, we’re out of chances. We’ve encroached on the natural world everywhere; we’ve thrown the climate into chaos; and we’ve developed an international travel industry that functions like a giant airborne petri dish. Deadly microbes that took months or years to travel across Europe in an earlier era now scurry around the planet in an afternoon.

The distances and times are abbreviated, and so is the old aphorism: Those who fail to learn from history are doomed – period.

Phase Six begins in the little village of Ilimanaq in Greenland, where new mining projects have rapidly expanded, probing ever deeper into the thawing ground. Eleven-year-old Aleq and his friend Malik are playing around one of those mining camps when they spot a deep cavity in the shiny rocks. And so this is the way the world ends, not with a bang but a whimper from a long-dead bird:

“A cluster of molecules that had previously thrived in the respiratory tract of an early variant of the Bering goose and that had been trapped with some throat tissue in the crystalline framework during the Holocene glaciation had been reintroduced to the air and the warming sun.

“Even lying there in the darkness and dirt, Aleq could smell them, like heated metal. He had Malik smell, too, those molecules that were now released to become a part of something new.” 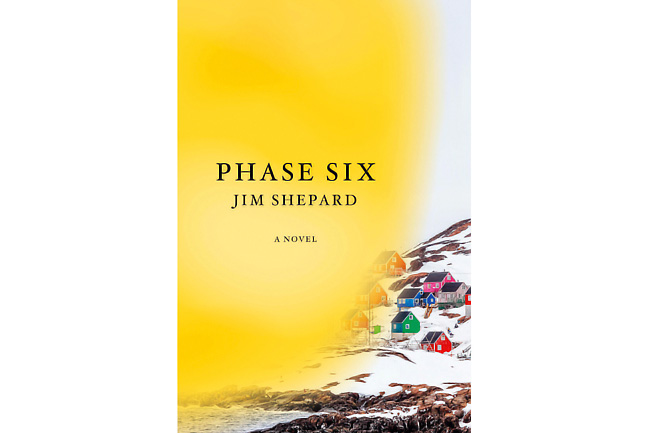 That something new is a pathogen that leaps nimbly from the boys to their families to fishermen to tourists and then to citizens all over the world.

With an incubation period of just a few hours and a mortality rate around 40 per cent, this killer is perfectly designed to exploit a hyper-mobile society that lacks any effective international coordination.

First unwilling and then unable “to break the chain of person-to-person transmission”, nations panic, millions die, and right-wing wackos claim it’s all a conspiracy to curtail their liberty.

You know this show; we watched the dress rehearsal on Fox News. But Shepard doesn’t often use a wide-angle lens in this trim book. We get just glimpses of the chaos around the globe during the weeks after Ilimanaq
is decimated. The novel’s real focus is the work of Jeannine and Danice, two scientists sent to Greenland to figure out what happened – and devise a cure as quickly as possible.

Suspecting that little Aleq could be a key part in this deadly puzzle, Jeannine takes him back to a high-security lab in Montana, while Danice stays behind to treat the infected as best she can.

Phase Six is best when it draws us into these three lives reshaped by a mysterious disease. While trying to save humanity, Jeannine and Danice must also deal with competing bureaucracies, demands from their own families, and waves of fear and grief as their friends and colleagues sicken and die.

Despite their immense talent and ambition, they have reason to be discouraged. “All of those pathogens that over time we’ve de-adapted to – we keep sticking our noses everywhere, they’re all coming back,” Danice said. “Who would you put your money on? Humans have been around for what, two hundred thousand years? And bacteria for like three and a half billion.”

Shepard is peerless when it comes to the way children experience trauma.

The sections that describe Aleq scampering around Ilimanaq and then hermetically sealed in a biosafety lab are harrowing and heartbreaking. How, Shepard asks, would a boy react to the knowledge that he might be responsible for killing his family, his village, the world?

But overall, Phase Six is an odd act of genetic manipulation that results in what might be called Apocalypse Minimalism.

Beautifully drawn episodes of private anguish are interrupted by quick-cut scenes and potted explanations of the way viruses and bacteria kill. You can spot strains of Michael Crichton in these thoughtful pages like panther paws grafted onto a lab-created sheep.

That could satisfy fans of cinematic thrillers and literary fiction, but I suspect the clash of tones and approaches will, instead, disappoint both audiences. There simply isn’t room here to accommodate what this novel wants to do.

The thriller elements feel familiar and undercooked; the personal stories are rushed and cramped.

The essential problem, though, may be one of motive. They mean well, of course, but pandemic apocalypses are the most schoolmarmish of all apocalypses. Asteroids, vampires, zombies – these scourges lunge at us from out of nowhere. It’s not our fault!

A virus that wipes out humanity, though, could have been avoided if only we’d protected the environment, monitored transboundary animal infections and nurtured global coordination.

Those are great points for a persuasive op-ed, but the nuance of Phase Six sometimes gets rubbed away by such declarations and its cursory re-creation of our recent history.