THE WASHINGTON POST – Jane Austen was working on a novel she called Sanditon when she got sick and died in 1817. Originally titled The Brothers (which sure rolls off the tongue a lot easier than Sanditon), she drafted 11 chapters – mostly just a throat-clearing that sketched out an array of Austen-like characters and was set in a fishing village called Sanditon, in seaside Sussex, which a gentleman entrepreneur envisions turning into a seaside resort town for England’s well-to-do.

Sanditon is a construction site, not unlike the pages Austen left behind. Now PBS’ Masterpiece in cahoots with ITV, has finished her work for her, fluffing it up and drawing it out in a silly but acceptably entertaining eight-episode series that will probably sit well with Masterpiece viewers. It’s not the next Downton Abbey (what could ever be?), but it certainly works as an intriguing piece of Austenalia, as it tries to both respect and elevate the story she might have had in mind.

It opens with Mr Thomas Parker (Love Actually’s Kris Marshall), Sanditon’s starry-eyed but underfunded developer, and his wife, Mary (Kate Ashfield), surviving a carriage crash en route to Sanditon; they are cared for by a large, hospitable, working-class family, the Heywoods, to whom they are so grateful that they offer the eldest daughter, Charlotte Heywood (Reign’s Rose Williams), an offer she can’t refuse: Come enjoy a summer at Sanditon as their guest.

Off we go. Charlotte, who is both intelligent and naturally gorgeous, charms just about everyone, including the sarcastically grumpy Lady Denham (Anne Reid, last seen in HBO’s Years and Years), who is Mr Parker’s primary investor.

Austen left everything that another writer – in this case Andrew Davies, whose 1995 screenplay for BBC’s Pride and Prejudice is still a gold standard for some – would need to take over. Sanditon has a pair of evil stepsiblings (Jack Fox and Charlotte Spencer) conspiring to inherit Lady Denham’s fortunes. It has cheerful bumblers and fancy folks from London. It has a distractingly handsome construction foreman.

Austen also envisioned a character who is a person of colour, in this case one Georgiana Lambe (Crystal Clarke), a young black widow from Antigua who inherited a fortune from her late, white husband. Georgiana’s arrival – and her wealth – has the people of Sanditon falling over themselves to make her acquaintance, yet because of their racism, their efforts to socialise with her are appallingly off the mark.

Georgiana is accompanied to Sanditon by her ward, Mr Parker’s dashing brother, Sidney (Divergent’s Theo James), a world traveller who is initially so rude to Charlotte that she can hardly stand to be in the same room with him.

Which, in Austen’s world, means they are fated to fall utterly in love. A lot has to happen between this point and that point, and trust me, a lot does. Sanditon moves with Masterpiece’s usual short attention span, with no scene lasting longer than a few minutes. Incidents abound, while characters thrive, fall and recover. And if Austen never finished the novel, then why should the producers? They end it all on a note that all but puts Season 2 on the schedule.

Williams gives a winningly energetic performance as Charlotte, while James smolders adequately as the only 19th-century upper crust gentleman sporting a constant four-day stubble. When Charlotte takes a brisk beach walk and spies Sidney emerging from the surf in his naked splendor, it’s a full-on Darcy alert. Bring your own fainting couch. 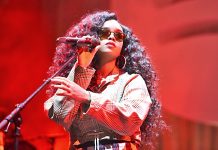