SACRAMENTO, CALIFORNIA (AP) — The Lakers said they are fully prepared for the steady stream of tributes for Kobe Bryant that they will surely see the rest of the season.

LeBron James welcomes it, calling it a therapeutic and needed part of the Lakers’ healing process.

James had another triple-double despite an off-night shooting, Anthony Davis scored 21 points and Los Angeles thumped the Sacramento Kings 129-113 yesterday, its first win since Bryant’s death.

James had 15 points, 11 assists and 10 rebounds while helping Los Angeles end a two-game skid. James shot six of 15 and missed three of four three-pointers but made up for it with his 11th triple-double of the season and the 92nd of his career.

The Lakers were playing the second half of a back-to-back, one night after an emotional 127-119 loss to Portland at Staples Center in their first game since last Sunday’s helicopter crash that killed Bryant, his daughter Gianna and seven others.

During the first timeout less than four minutes into the game, a video of both Bryant and Gianna playing basketball was shown on the giant scoreboard as members of both the Lakers and Kings watched. The numbers eight and 24 flashed on the court as Bryant’s voice echoed through the building.

Tributes continued to play throughout the game as fans – many wearing Bryant’s jerseys – repeatedly chanted his name.

“We’re prepared for it. We understand it and we hope it happens every night just because of the legacy that he’s left behind,” James said. “We’re prepared for it as a team, as an organisation and we’re going to continue to get through it. It’s our obligation just to go out and play the game, have that winning mentality because that’s what he would want.”

A memorial wall with pictures of Bryant and Gianna was set up outside one of the main entrances to Golden 1 Center. Fans scrawled messages on the wall and left flowers.

Inside, the Lakers did their best to move forward following the tragedy that left the entire organisation reeling.

They scored 44 points in the first quarter, made 14 3s and dished out 26 assists before halftime, dominating the Kings on both ends while building an 81-64 lead.

James capped a fast break with a two-handed dunk in the second quarter that drew roars from the crowd, then made a long bounce pass to Caldwell-Pope for a layup. James followed that with another dunk, and Rondo added a three-pointer.

“Tonight, it was get back on track,” Vogel said. “Let’s get back to business and go out and get a win, no matter what.”

De’Aaron Fox scored 24 points and Buddy Hield had 22 for Sacramento.

“That was a really good team that was unfortunately … they were locked in,” Kings coach Luke Walton said. “Give them credit, they came out firing.”

The Kings got within 108-93 early in the fourth quarter before the Lakers pulled away. James had a three-pointer, Rondo scored twice and Caldwell-Pope made three free throws.

“We wanted to put together a complete game and we did that tonight,” James said. 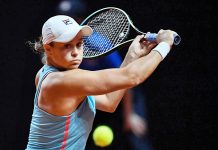 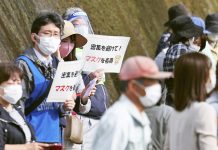