THE WASHINGTON POST – An act of unspeakable violence plays out on the cover of The Consequences of Fear, the 16th instalment in Jacqueline Winspear’s exceptional series featuring the indomitable PI Maisie Dobbs. Seen in silhouette against the backdrop of a full moon, a man is stabbing someone already slumped in his arms. What’s not as noticeable: a witness crouching in the doorway of a bombed-out building in wartime London. His name is Freddie Hackett, and it’s this traumatised 12-year-old’s predicament that spurs Maisie to ferret out the identity of the victim and the killer.

There are many exceptional, long-running crime novel series for devotees of the genre. Michael Connelly, Robert Galbraith, Tana French, Walter Mosley, to name a few, have created brilliant detectives whose personal lives are as intriguing as the cases and social justice issues they pursue. For fans of historical fiction as well as mysteries, the Maisie Dobbs novels offer an honourable heroine whose mettle has been forged by personal tragedies and her country’s experience in two world wars.

The Consequences of Fear opens in 1941, when Britain has been at war with Germany for two years. It seems outrageous now, but Britain’s intelligence services then used fleet-footed children to deliver messages to agents across London. Children like Freddie dodged bombs, running past decimated buildings and dead bodies, as they carried messages in aid of their country. It’s on one of his runs that Freddie spots two men fighting to the death. When the killer flees the scene, Freddie runs on to deliver his message only to discover that the man who opens the door at the designated address is the murderer. Fearing for his life, Freddie recalls he once delivered a message to private detective Maisie Dobbs and he seeks her help. When Scotland Yard doubts the boy witnessed a murder, Maisie takes the case knowing that discovering the truth is the only way to keep Freddie safe.

From London to Scotland to her rural manor home in Kent, Maisie is constantly on the move as she works the case and performs the duties of her other job working for Britain’s intelligence services. Meanwhile, she grapples with her fears: fear of dying in the bombings, fear of Hitler invading England, fear for her family’s safety and fear, as a widow, of moving on to a new marriage with the American diplomat who loves her. When she suspects a French intelligence agent may have been involved in the stabbing death, she fears the consequences to her country and its fight against the Nazis.

As Winspear grimly described scenarios playing out in London, she reminded us of people’s ability to endure and carry on: British citizens watching and praying as a downed Spitfire is pulled from the Thames, its dead RAF pilot just a teenage boy. Maisie dealing with the news that a woman she cared about was tortured and killed by the Nazis for her work with resistance groups in France. The nation reeling from senseless killings such as the discovery of 20 women and children found dead in a bomb shelter. They were killed instantly, their bodies outwardly unmarked, after a nearby detonation knocked the air out of their lungs.

In This Time Next Year We’ll Be Laughing, the wistful title of the memoir Winspear released last year, she wrote of childhood fears she developed after hearing her mother speak of life in Britain during World War II. Winspear seems to have channelled those fears and the memories of her mother’s stories into an intriguing series that entertains and inspires. 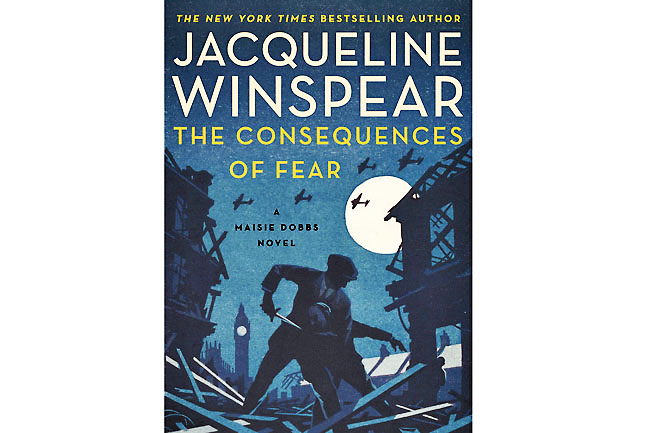