ROME (AFP) – It’s been dismissed as immoral, outdated and reality TV kitsch. It’s also hailed as Italy’s national treasure, a song festival that captures the soul of the country each year.

Whether for the soaring melodies or the feuds, botched ballads and bad outfits, Italians delight in the annual five-day Sanremo Music Festival that began yesterday, a national pastime inspiring both nostalgia and derision.

Coronavirus this year has made its mark – the orchestra, performers and presenters will play without a live audience, while supermodel Naomi Campbell was forced to pull out due to travel complications.

But AC Milan striker Zlatan Ibrahimovic stepped in to provide some star power as a presenter on opening night, and the event – known to devotees and detractors alike as just ‘The Festival’ – is again expected to draw in the viewers.

Some 10 million Italians tune in each year to ogle the stars and delight in the inevitable controversies, whether accusations of lip-synching, plagiarism, celebrity feuds or wardrobe malfunctions.

Paolo Soddu, who co-authored a 2001 book on the festival, calls Sanremo a “national ritual”, a shared experience that reveals “the collective dream” of Italy.

“Whether you like it or not, it’s talked about,” he told AFP. “Even if you hate it, you watch.” 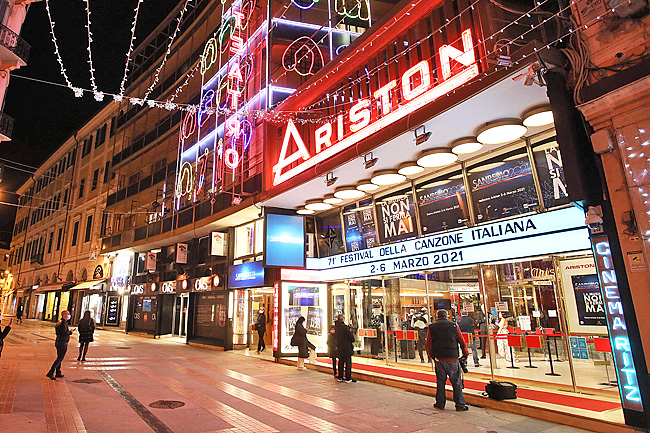 The festival began in 1951 as a way to boost tourism in the northwestern seaside town of Sanremo, with state broadcaster RAI subsequently using the new medium of television to present fresh-faced singers crooning to a bourgeois audience in their evening best.

An obligatory step for Italian singers, Sanremo has hosted the Who’s Who of the country’s popular music over the decades, from Gino Paoli, Lucio Dalla and Mina to Lucio Battisti, Ornella Vanoni and Bobby Solo – even Andrea Bocelli.

One of the first to be catapulted to fame by the festival was Domenico Modugno in 1958, whose refrain Volare captured the zeitgeist of a jubilant Italy revelling in its post-war economic boom.

Although most of its singers are unknown to international audiences, Sanremo has welcomed over the years a smattering of foreign stars, from Shirley Bassey to Dusty Springfield and Sonny and Cher. Even Louis Armstrong was a contestant.

Uproar is habitual. Singers have broken social mores – Adriano Celentano in 1961 launched into Elvis-like hip thrusts – and viewers have deemed many songs in bad taste, like one about euthanasia in 2010.

But there have also been genuinely dark moments, notably in 1967 when singer Luigi Tenco shot himself in the head hours after his song Goodbye, love, goodbye – sung with then-girlfriend Dalida – was voted out.

In more recent decades, the festival’s kitsch quotient has skyrocketed, as befits the festival that inspired the Eurovision Song Contest, considered the pinnacle of camp.

Roberto Benigni, the Oscar-winning star of Life is Beautiful, made his onstage entrance as host one year atop a white horse and Dita von Teese performed a dance inside an oversized drinking glass.

Established musical stars called the “Big” dominate performances, singing songs by Italian authors never before heard in public, but there are also spots for lesser known.

Winners are voted by juries of the public and journalists, as well as viewers at home.

This year’s festival weathered an early scandal, in which host Amadeus insisted the show would go on in front of an audience, unleashing a torrent of criticism, given that virus restrictions have cancelled concerts, shows and festivals throughout Italy, putting scores of musicians, actors and others out of work.

Even the general manager of La Scala opera and the bishop of Sanremo weighed in before Italy’s culture minister put his foot down, saying no public would be allowed.