Samira Mazaal is 77 and still going strong more than half a century after turning to photography to feed her family because she had no choice.

“Peasants, intellectuals, I’ve photographed them all,” said the mother of two, her black hijab framing a face lined by life.

“I have photographed Amarah in all its beauty – I went deep into the marshes,” to the south of the city in the floodplain of the Tigris and Euphrates rivers.

Everyone in the area turns to Studio Samira, be it for a passport photograph or to have a couple’s portrait taken ahead of their wedding.

She told how she became the first female photographer in Maysan province aged just 16, despite familial conventions that ruled in the Iraq of the 1960s, and also how political activism led to imprisonment and torture. 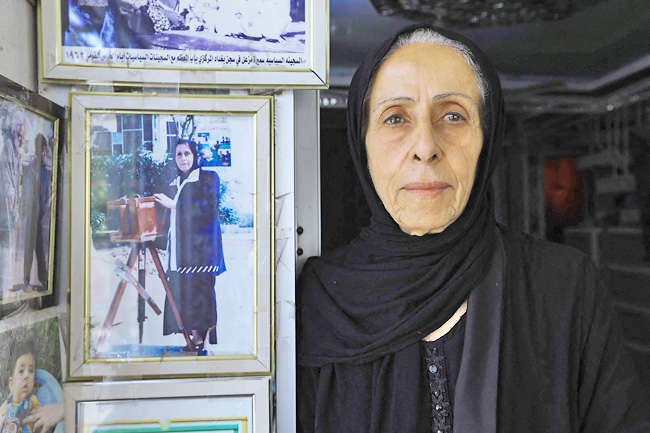 “My family has never known any other business – we’re all photographers,” Samira said.

Framed photographs lining the walls bear witness to her trade, in both black and white or in colours faded by time.

She has albums of images showing Iraq as it used to be: black-clad women carrying huge bales balanced on their heads; a smiling peasant woman in a flowery dress, her hair braided, standing near a cow; a mother and child filling a pot with water from the river.

Samira’s father was among the first to introduce photography to the province.

“I asked him to initiate me into the craft, but he said: ‘No, you’re too young. You can’t – society can be cruel’,” she recalled.

But circumstances would force him to change his mind. He was rendered blind in a botched operation, and could no longer provide for his family. So Samira had to step in.

She started off using the daguerreotype method of the 1800s that uses silver-plated copper sheets, but then her father sold off some land so she could buy more modern equipment.

“My studio became extraordinarily successful,” she smiled. “Because I was a young woman, I could take pictures of families.”

Samira exploited the norms of a conservative society: the male heads of households preferred that a woman photographer, not a man, take the pictures of their wives and daughters.

Bassem al-Subaid is one satisfied client of Studio Samira.

“There isn’t a single household in all of Maysan province that doesn’t know Samira the photographer,” he told AFP.

“My generation got to know Samira when we came to be photographed by her,” added the man in his forties. “It was the previous generation that saw her political activism.”

In 1963, Iraq was being torn apart by revolutions and bloody crackdowns, and the then adolescent had no idea that a communist tract would put her behind bars.

After General Abdel Salam Aref took power in a Baath party coup, militants came to Samira’s studio and asked her to mass-produce a poster denouncing the regime.

She accepted that she had not yet formed her own political opinions, and was swayed at the time by her brother’s sympathies.

“In all of Amarah, there wasn’t a single wall without a pasted copy of the poster,” she boasted. “It wasn’t a crime – it’s a source of pride.”

A picture of herself, which she still has today, made her famous. It shows her lying on a hospital bed after being tortured.

“I was screaming so hard I thought the whole town would come and save me,” she recalled.

It was not to be: she spent the next four years, ill and abused, in a Baghdad prison.

She was freed after an international campaign that led to pardons for political prisoners in Iraq.

In 1981, she was again jailed briefly under the rule of Saddam Hussein. And then again 10 years later over a protest in Amarah against the repercussions of the Gulf War over Kuwait.

Like several other women prisoners, she was granted a pardon after just a few months.

Today the photographic studio is still welcoming clients, and despite her age, the flame still burns brightly in Samira. She hailed the October 2019 uprising, sparked by angry young Iraqis seeking to bring those in power to account.

“The protesters should have transformed their movement into a revolution to root out corruption and the corrupt,” Samira said.