TEHRAN, IRAN (AP) — Iran agreed on Sunday to allow international inspectors to install new memory cards into surveillance cameras at its sensitive nuclear sites and to continue filming there.

The announcement by Mohammad Eslami (AP pic below) of the Atomic Energy Organisation of Iran after a meeting he held with the International Atomic Energy Agency (IAEA) Director-General Rafael Grossi in Tehran still leaves the watchdog in the same position it has faced since February, however.

Tehran holds recordings at its sites as negotiations over the United States (US) and Iran returning to the 2015 nuclear deal remain stalled in Vienna. Meanwhile, Iran is now enriching small amounts of uranium to its closest-ever levels to weapons-grade purity as its stockpile continues to grow.

“We had a major communication breakdown with Iran, which is something we cannot afford, having so many important issues that we need to solve,” Grossi told reporters on his return from Tehran. “And I think that was solved.”

Eslami described the negotiations between Iran and the Vienna-based IAEA as “sheerly technical” without any room for politics. He said Grossi would return to Iran soon to talk with officials, without elaborating. 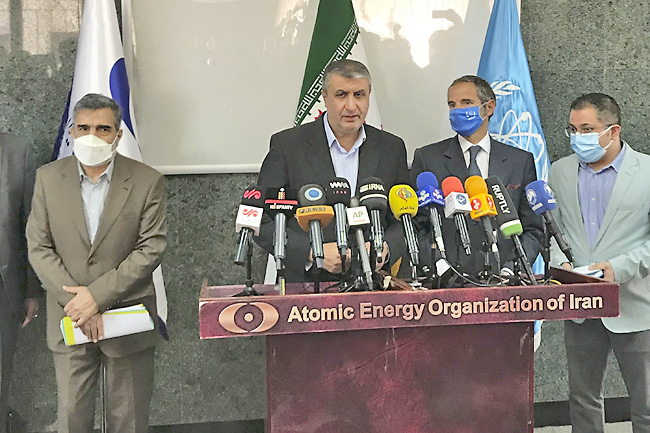 “The memory cards are sealed and kept in Iran, according to the routine,” Eslami said. “New memory cards will be installed in cameras. That is a routine and natural trend in the agency’s monitoring system.”

A joint statement released by the IAEA and Iran confirmed the understanding, saying only that “the way and the timing are agreed by the two sides”.

Grossi said the agreement would ensure “continuity of knowledge” that would ensure the watchdog can piece together the data it needs in future.

“The reconstruction and the coming together of the jigsaw puzzle will come when there is an agreement at the Joint Comprehensive Plan of Action level,” he said, a reference to the talks on reviving the 2015 deal between Iran and world powers. “But at that time, we will have all this information and there will not have been a gap.”

The announcement could buy time for Iran ahead of an IAEA board meeting this week. Eslami said Iran would take part in that meeting and its negotiations with the IAEA would continue there.

The IAEA told member states in its confidential quarterly report last week that its verification and monitoring activities have been “seriously undermined” since February by Iran’s refusal to let inspectors access their monitoring equipment.

The IAEA said certain monitoring and surveillance equipment cannot be left for more than three months without being serviced.

It was provided with access this month to four surveillance cameras installed at one site, but one of the cameras had been destroyed and a second had been severely damaged.