DUBAI, UNITED ARAB EMIRATES (AP) — An Iranian cargo ship believed to be a base for the paramilitary Revolutionary Guard and anchored for years in the Red Sea off Yemen has been attacked, Tehran acknowledged yesterday.

The assault came as Iran and world powers sat down in Vienna for the first talks about the United States (US) potentially rejoining Tehran’s tattered nuclear deal, showing that challenges ahead don’t rest merely in those negotiations.

The ship’s long presence in the region, repeatedly criticised by Saudi Arabia, has come as the West and United Nations experts said Iran has provided arms and support to Yemen’s Houthi rebels amid that country’s yearslong war. Iran denies arming the Houthis, though components found in the rebels’ weaponry link back to Tehran.

Iran previously described the Saviz as aiding in “anti-piracy” efforts in the Red Sea and the Bab el-Mandeb strait, a crucial choke point in international shipping. A statement attributed to Foreign Ministry spokesman Saeed Khatibzadeh described the ship as a commercial vessel.

“Fortunately, no casualties were reported and technical investigations are underway,” Khatibzadeh said. “Our country will take all necessary measures through international authorities.” Iranian President Hassan Rouhani called the Vienna talks a “success” while speaking to his Cabinet yesterday. 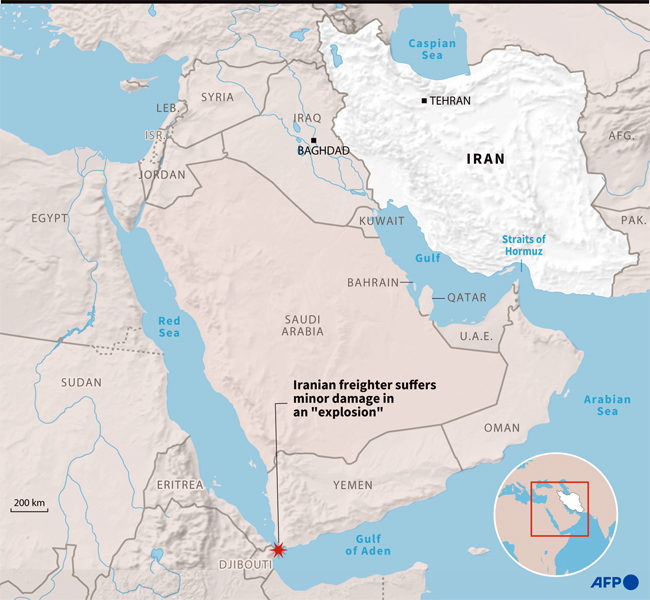 “Today, one united statement is being heard that all sides of the nuclear deal have concluded that there is no solution better but the deal,” he said.

Iran’s semiofficial Tasnim news agency, believed to be close to the Guard, blamed the blast on explosives planted on Saviz’s hull. It did not blame anyone for the attack and said Iranian officials likely would offer more information in the coming days.

In a statement, the US military’s Central Command only said it was “aware of media reporting of an incident involving the Saviz in the Red Sea.”

“We can confirm that no US forces were involved in the incident,” the command said. “We have no additional information to provide.”

The Saviz, owned by the state-linked Islamic Republic of Iran Shipping Lines, came to the Red Sea in late 2016, according to ship-tracking data.

In the years since, it has drifted off the Dahlak archipelago, a chain of islands off the coast of the nearby African nation of Eritrea in the Red Sea.