THE WASHINGTON POST – Rapper and record producer Large Professor used to say rap lyrics should not include years – it dates your song. It’s why A Tribe Called Quest dedicated one of its songs “to eternity”.

I couldn’t help but think of that as Insomniac Games Creative Director Marcus Smith talked to me about the evolution of the Ratchet and Clank series, from its incredibly referential humour and satire in its early PlayStation 2 titles to the more capricious adventures in the past decade. The first and second game lambasted consumer culture, while the third game depicted the dangers of pop idolatry.

Smith also served as creative director for Sunset Overdrive, an Xbox One launch title from 2013, and one of the last Insomniac Games titles before Sony acquired the studio. That game was filled to the brim with satirical portrayals of capitalist culture, driven by an energy drink that turned people into monsters.

“Not all of those held up particularly well!” Smith told The Washington Post. “So I understand and the studio understands that anything that’s referenced can often times make your work of art dated. Our main point was to make stories that are universally relatable, and there’s little things here and there that you can draw a line to now. But hopefully, five years from now, it will still be entertaining on its own.”

This tactic isn’t unwise. Despite a 19-year-history and millions of units sold across several titles, Ratchet and Clank have largely avoided the spotlight as PlayStation icons. This year, Rift Apart is one of the few big budget, next-gen console releases. Insomniac Games wants to take advantage of the new interest early in this console generation, which means having to reintroduce the two characters to new players, all while appeasing longtime fans such as myself, who have played every entry since the PlayStation 2.

Rift Apart also comes after Insomniac has attained much broader cultural cachet and name recognition thanks to its successful Marvel’s Spider-Man and Marvel’s Spider-Man: Miles Morales games, both PlayStation exclusives. But Smith said they’ve learned a lot from the heroes, as well as Sunset Overdrive, which was basically a Ratchet game that allowed for grinding and bouncing across an open-world city. 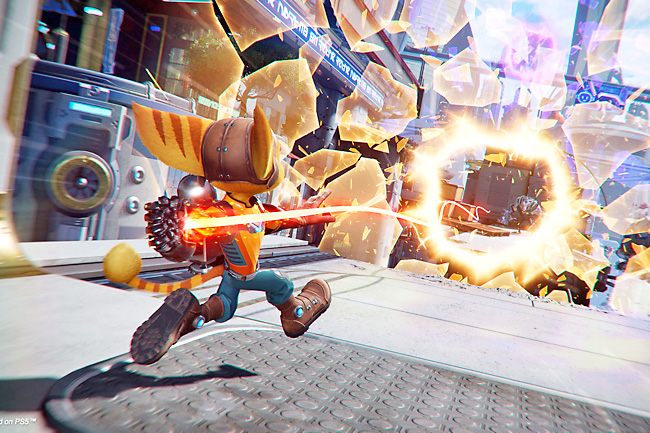 The new dimensional rift mechanic seems to accomplish both in the reintroductions, as well as representing an evolution of Insomniac’s design philosophy. Ratchet games are always about fun weapons and gadgets, and in Rift Apart, players can use the ‘Dimensionator’ to jump between alternate realities. From what we’ve seen of the gameplay, this kind of works like Spider-Man’s web-swinging, except instead of moving between buildings, Ratchet is moving between universes. For Smith, it’s important that players enjoy every second and moment while moving.

Smith said the first Insomniac game he played before getting hired was Spyro the Dragon, a beloved early 3-D platformer that nailed mixing snappy movement with luxurious, high-quality animation work.

“Even when you’re not actively involved in the gameplay, it’s just fun to move around in these worlds,” Smith said. “That to me has been the through line for every game we ever make. It has to feel good. With Rift Apart, we’re capitalising on a lot of that experience.”

The dimensional rifts also give the storytellers an ample runway to reintroduce story concepts to new players.

“Players will have the opportunity to see familiar faces from previous entries in the franchise, while also giving us an entirely new version of the dimension’s cast,” said Lauren Mee, the game’s lead writer. “This lets players meet fan-favourite characters, with a twist.

Most notably, they’re reintroducing the star of the show. Not everyone may be familiar with Ratchet’s past ornery attitude and his early hot-and-cold friendship with Clank. Ratchet has a big chip on his shoulder as the last surviving member of his alien species, the Lombax. The new character, Rivet, is Ratchet in an alternate dimension, and shows what would happen to this same character if they lived under different circumstances.

“Rivet, unlike Ratchet, has been on her own her entire life. She’s never had a best friend to help her through her struggles, no one to celebrate her wins with,” said Insomniac Senior Animator Lindsay Thompson. “Has her time spent alone made her a little awkward?”

Thompson said the writing team also thought about who Rivet isn’t. She isn’t dark, mean-spirited, and unlike Ratchet, is a different person due to her circumstances. The ghosts of her pasts created a shy, impulsive but kind person.

The weapons are another key component of the Ratchet games. Insomniac previously made the PlayStation-exclusive first-person shooter series Resistance, which also dabbled in strange, out-of-the-box guns like the Mutator, which would turn enemies into moving proximity mines. Ratchet, being a more G-rated affair, has previously fired guns that turns enemies into sheep.

Smith said the team tries to “hit a 10” on one of the three pillars that make fun weapons to shoot: strategy, spectacle and humour. It was the same formula used in the original Ratchet games, created by former Insomniac chief creative officer Brian Hastings.

“It held up during all these other games we were making too. Even when we were designing gadgetry for Spider-Man, humour might not be part of that equation, but we certainly looked at strategy and spectacle,” Smith said. “So those lessons are what we bring forward into all of our games.”

Music is another huge, early defining factor of the Ratchet games. The early soundtracks written by David Bergeaud gave each planet a personality, driven by synth beats and funky bass lines. Ratchet and Clank for the PlayStation 4, which was a soft reboot and tie-in for the theatrical release, went more for sweeping orchestral sounds, far less distinctive than the early tracks.

It’s hard not to get excited over what composer and Devo lead singer Mark Mothersbaugh may bring to the table, considering what his compositions did to distinguish Thor: Ragnarok from every other Marvel film. Mothersbaugh told The Post that he finds writing music for video games far more interesting than writing for film or pop radio.

“Games goes far beyond both of those mediums. Your music is never heard exactly the same every time,” said Mothersbaugh, an accomplished film and games composer who wrote tracks for the original Crash Bandicoot title in 1996. “They listen to it build, as different components come in as you accomplish more things, until it finally builds up to the piece of music you’ve been writing. Then you go to the next level and do it again. That’s how you write music. You don’t write all the parts at the same time. For me, it’s such an interesting way to think about the music you write.” 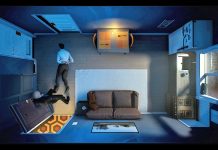 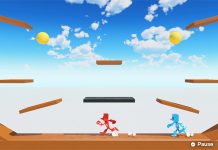