Informed community in the making

The first stop was Sabli Food Industries (B) Sdn Bhd at the Lambak Kanan Industrial Site, where the delegation was briefed on the company’s history and products, before witnessing the processing and packaging processes.

Next was the Information Department, with a stop made at the Pelita Brunei Division.

The delegation was briefed on the publication of the official government newspaper, Pelita Brunei, which began operations on February 15, 1956. Sixty-five years on, Pelita Brunei remains one of the platforms in reaching a wider audience in the dissemination of information, government policies and government activities.

After touring the Photo Unit, they headed to the Lentera Makmur Gallery that was officiated on April 10, by Minister at the Prime Minister’s Office Dato Seri Setia Haji Awang Abdul Mokti bin Haji Mohd Daud.

This gallery is an added value to the existing information dissemination platform, in line with the original objective of the establishment of the Information Department on April 1, 1952, which is to channel information on government policies and activities to both urban and rural areas, in an effort to create an informed society. 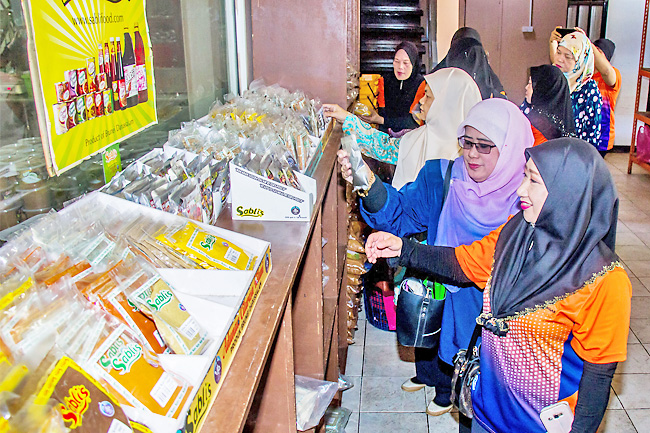 The afternoon session saw a visit to Helif Aquaculture in Kampong Mentiri, which is spread out over a 32-hectare space.

The company, which has been operating since 2018, produces Vannamei (Whiteleg) shrimps for local supermarkets.

A day earlier, a similar trip was conducted for another 35-member group from the same village, led by Major (Rtd) Ampuan Hussain.

After a visit to Sabli Food Industries, the group headed to the Information Department.

Acting Director of Information Haji Shahrul Jeffri bin Dato Paduka Haji Ibrahim said the PMB is one of the platforms to deliver official information on government policies through briefings, dialogues and visits to the public and private sectors.

“PMB will be extended to all four districts, in line with the Information Department’s vision ‘Towards Cultivating an Informed Society,’” he said.

Information Department officials delivered a briefing on ‘The roles and responsibilities of the people and residents of Brunei Darussalam,’ which discussed the equal contribution required of the people and the government in contributing to the welfare of the country.

The group was also enlightened on restricted and prohibited goods, procedures for applying for export and import of goods, declaration processing procedures, transit goods application procedures and transfer of goods, taxes, enforcement of control of subsidised goods and customs offenses and penalties.

In the afternoon, Royal Brunei Police Force personnel delivered a briefing on ‘Domestic Abuse and Violence,’ while Fisheries Department officials discussed ‘Shrimp or Fish Farming’ and the department’s role in expanding shrimp farming and the fisheries industry in the country.