THE JAKARTA POST – Our ancestors would be in total shock if they found out our generation can actually make a living by doing nothing. Literally.

Maduranese YouTuber Muhammad Didit garnered more than four million views just by staring blankly in front of his low-resolution webcam for two hours straight. In these times, when people are the most attentive to what’s happening on the Internet, nonsensical content often grabs the spotlight. That video, for example, instantly made the 22-year-old a phenomenon, resulting in his subscribers number rocketing from 2,000 to 20,000 (now, he has almost 60,000).

People started posting his face as a meme (a joke image), and International publications like VICE and World of Buzz even wrote about him. He’s since made similar videos including of himself sitting up on a tree branch and sitting on the toilet for two hours. Didit, who lives and streams his videos from his home in Bangkalan, Madura, even has his own Wikipedia page (not published by him, he swears).

Didit is not the first Indonesian to do this. Alfakhry, a YouTuber from Jakarta known as NapLive, has done it a few months prior. Alfakhry live-streamed himself sitting still for three hours nonstop. As per today, the video has been watched 650,000 times. Not as successful as his successor, but the number shows that an audience for such passive entertainment exists.

“My videos are always kind of whimsical. To decide what to do, I brainstorm a lot with myself to find an odd, more nonsensical approach. One day, I thought it would be exciting to sit still in a livestream for a few hours,” Alfakhry told The Jakarta Post. 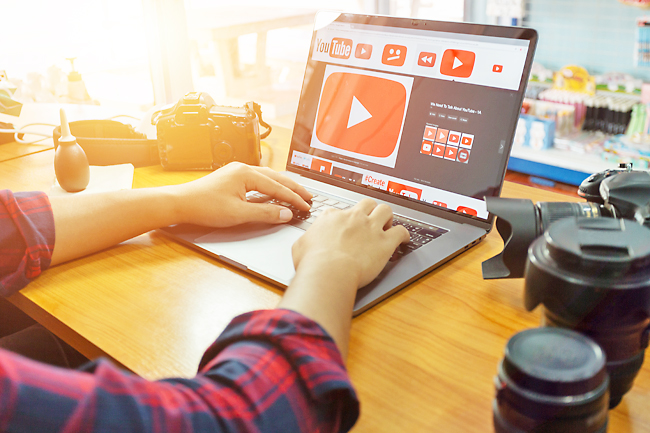 He admitted that he had watched Benjamin Bennett, a popular American YouTuber who regularly uploaded this type of content six years ago; he may have even pioneered the genre. However, Alfakhry stated he did not think about Bennett when he executed the idea.

“I, too, have no idea why people like to watch me do nothing for several hours. Maybe they were there for proof that I was really going to spend all those hours doing what I said in the title,” he tried to explain.

In the beginning, around five years ago, Alfakhry created his YouTube channel as a platform to broadcast his animation videos. During that time, he was not satisfied with his channel growth; he started to upload some nonsensical ones to spice things up. “I forgot which video, but an absurd one got me 10,000 subscribers overnight. That doing-nothing livestream contributed at least a thousand subscribers a day for several weeks.”

That specific nonsensical livestream gave him around IDR1 million. What’s more valuable, however, is the loyal subscribers he gained from it. Now, with his followers from that absurd era, he is focussing on gaming content, which lands him around IDR20 million a month. For his gaming livestream routine, he gets five times more of that monthly income. It is quite understandable that, going in his 20s, he still doesn’t think about college.

A bachelor of theology, Pit started his YUPS! YouTube channel by producing theological educational content. Feeling frustrated because no one saw it, he decided to switch genres. He responds to whatever’s trending and puts his own twist on it. When the word “Anjay” (a slang term often uttered when impressed) became viral, Pit rode the wave: He recorded himself saying “Anjay” a 100,000 times. The video exceeded the 10-hour mark and got him 700,000 views. The best part: The content single-handedly kickstarted his YouTube account, contributing more than 20,000 subscribers. Still trying to always join the trend, Pit also made the doing-nothing video —he sat still two hours longer than Didit. He also made a video himself watching the whole of Didit’s video, which has raked close to 300,000 views.

“It looks stupid, but I try to put some messages in every content I make. When I did four hours of sitting still, at the end of the video, I said that this is what we were and are going through today (because of the pandemic),” Pit told The Jakarta Post. That video gave him IDR3 million in revenue.

He explained that the doing-nothing content was categorised within the “endurance” content genre, which was widely popularised by philanthropist and YouTuber MrBeast who spends insane amounts of money as reward for his silly games reward. The American YouTuber started his channel by uploading endurance videos, such as reading the Oxford Dictionary in one sitting and counting to 100,000. “Then, many Indonesians followed his step,” Pit stated.

Other videos by Pit included in this genre are: An ASMR (Autonomous Sensory Meridian Response, which focusses on sounds that create a tingling sensation) video of the YouTuber slapping himself on the cheeks, a salute to the Indonesian flag for three hours, and the aforementioned Anjay one. “We trained ourselves not to stop halfway. That determination to achieve a goal is the key to thriving in this genre.” Pit told The Jakarta Post about his recipe for success.

Pandemic time indeed gives Internet creator moments to shine even brighter. The time people spend on the Internet has reached a new height: An expected consequence when people are forced to be at home. The question is, why this content? What do we get from staring at people staring at us?

For Yogyakarta State University sociologist Amika Wardhana, it is all about our nature as “zoon politicon”, or social beings. It turns out that looking at people doing nothing gives people a sense of togetherness.

“We can’t live alone. We need something to keep us company —or at least pretend to. It doesn’t matter whether it is physical or virtual. Take Castaway as an example. In that movie, we even create someone or something to be a friend. We need that companionship,” Amika said. “We don’t need to go far as having a conversation to not feel alone; an eye interaction is enough to communicate. We just need to feel that they are there.”

Then, this human nature is capitalised. YouTubers see the opportunity to profit from this and create a doing-nothing video, a “virtual friend” people need. Amika has a dystopian vision: He worries this trend may see the zoon politicon evolve from needing face-to-face interaction to preferring virtual interaction.

Psychologist Bianglala Andriadewi said that people on the Internet were inclined to look for content that felt relatable. Among various YouTube content that glorifies a variety of exciting activities and massive wealth, there’s this group of YouTubers who create relatable daily life situations. “This type of content reassures people that they are not the only ones doing ‘nothing’ in life —they are not alone,” Lala told The Jakarta Post.

We’re all familiar with fear of missing out (FOMO). When something is widely talked about in social media, people tend to aggressively jump in. They try their best to understand what on earth the Internet is talking about at the moment. Many people search and click Didit’s doing-nothing video just to be in the know.

Furthermore, Lala believes people naturally look for attention. They need our likes, comments, or any kind of feedback for some kind of positive reinforcement. Creators are then pushed themselves to do something unique and “different” to get it. The moment they realise that people love nonsensical videos Didit makes, many more creators follow that path. Not everyone finds this kind of validation shameful, though. Some genuinely enjoy creating it. “We may think nonsensical content is embarrassing, but people perceive emotion differently. It is possible that doing such things don’t make them feel ashamed.”

YouTube spokesperson and communication manager of Google Indonesia Feliciana Wienathan agreed. “It can be absurd for one person and totally exciting for another,” Feliciana said. She thinks it’s only natural that such content pops up on a platform built on the premise of openness and that the growth of this genre is the ‘beauty of YouTube’.

Relating to Amika’s opinion about zoon politicon, Feliciana specifically talked about a case of “study with me” videos, another genre that is popular for the last two years in Indonesia. Simply put, it shows the recording of people studying for hours, creating an atmosphere of studying together.

Google’s role in this was to make sure there is no breaching in community guidelines, such as hate speech or cyberbullying. “I don’t think those nonsensical content breaches the community guidelines. If you want to say “Anjay” without promoting violence or hatred, or to harass any individuals or groups, of course it is allowed.”