Locals in Gamerimura village gathered to mark the usually colourful celebrations, an ancient tradition known as Baikho festival that is predominantly observed by the Rabha tribes every year in June, although people from other communities have joined in the celebrations in recent years.

The festival is celebrated across the state annually.

During the festival, a series of rituals are carried out to ward off evil spirits, spark ample rains and bring good will to the community. In the afternoon, locals dressed in traditional attire come together to dance to the beat of drums. In the evening, a tall structure made from bundles of bamboo is set alight and once the sun sets, priests offer prayers to the harvest deity, who they believe will bring a generous crop season.

After the prayers are done, priests run over the hot coals left simmering by the fire, an act meant to honour the harvest deity. Women later wash the feet of the priests before serving them food.

Rahini Rabha, 59, who travelled from Dairang village in Assam for the celebrations, said he has served as the festival’s priest for the last 17 years.

“It celebrates the tribal Rabha people for agriculture, good health, wealth and education,” he said. 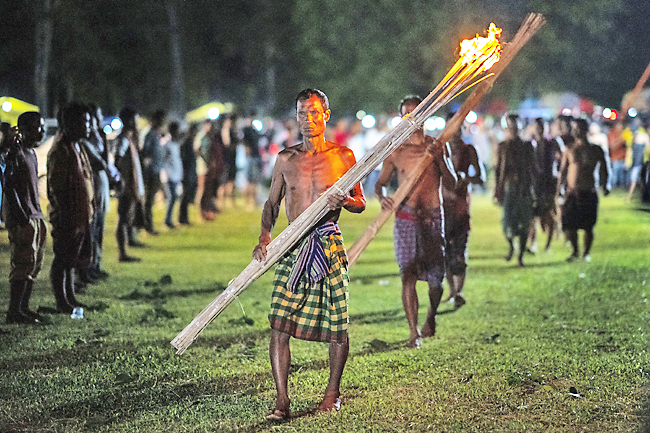