In search of better way to safeguard cultural heritage

ANN/PHNOM PENH POST – Cambodia is playing host to an international conference to find effective measures and solutions to protect cultural heritage and prevent looting of historical artefacts and heritage items, which kicked off in Siem Reap and will run tomorrow with the theme “International Conference on Cultural Property Protection: The Prevention of the Illicit Trafficking of Cultural Properties – An ASEAN Perspective”.

According to the Ministry of Culture and Fine Arts, the conference was held to discuss the scope of these issues and coordinate on strategic measures to ensure the return of looted artefacts.

Speaking at the conference, Minister of Culture and Fine Arts Phoeurng Sackona said that many Cambodian cultural properties were looted, especially during periods of conflict and upheaval, and then illegally smuggled out of the Kingdom, an indisputable assertion given that many of the lost artefacts have been found on sale at marketplaces, auction houses and galleries abroad.

The minister said that she and the government regard such looting and smuggling of these cultural properties as acts of destruction – as opposed to collection or preservation – that undermine understanding of the underlying cultures and the identity of the descendants of their creators.

She continued that Cambodia and all ASEAN countries acknowledged that it is an immediate necessity to protect the joined cultural heritages in ASEAN by combatting illegal cultural property trading as well as forming a cultural market with a sense of mutual responsibility.

“In recent years, Cambodia and other ASEAN nations took active steps to jointly prevent the destruction and looting of those properties through cultural exchanges among museums and the private sector. 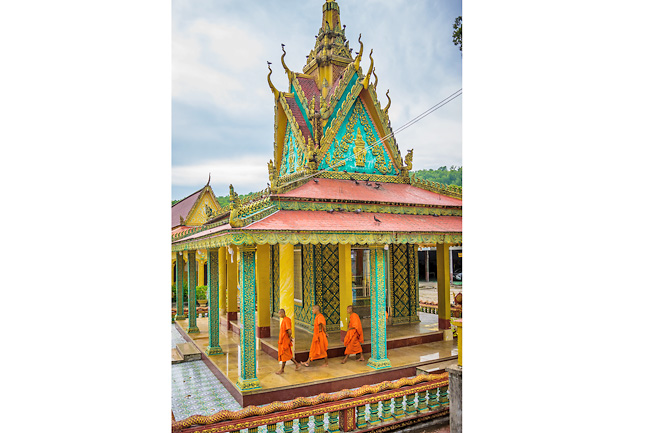 “This is the reason that Cambodia is striving to look for cooperation among ASEAN countries and the international community to jointly combat illegal trading as well as the protection of cultural heritage,” Sackona said.

The conference also has the goals of promoting understanding of culture, encouraging regional peace and security, and exploring opportunities for economic development related to heritage in the ASEAN region.

Minister of Foreign Affairs and International Cooperation Prak Sokhonn attended the international conference virtually and said that Cambodia recently made a big move forward with repatriating its looted cultural artefacts back home again.

He said he expected that the rest of the looted artefacts which can currently be found in museums and private collections abroad would be returned to Cambodia in the near future, though this would only be possible through international cooperation.

“We believe that the looting of ancient artefacts is a complicated issue faced by all ASEAN member states. That is the reason that we have invited the ASEAN governments and international experts in this field here to discuss these issues,” he said.

Sokhonn said that the return of Cambodia’s looted artefacts would serve to motivate Cambodians and help inspire new ideas and innovation among them, while also allowing for new museums to be created that can be designed to incorporate elements like music or the use of technology and entertainment for an overall expansion of cultural tourism.

With Cambodia being the ASEAN chair this year, the ASEAN summit is set to take place in the Kingdom in November and Sokhonn urged ASEAN members to touch on this issue at that gathering.

“I hope that ASEAN ministers of culture will create an orientation programme for the region with the participation of cultural heritage working groups and each country’s culture ministry and cooperation at all levels such as commerce and law enforcement,” he said.

Separately, a Buddha statue estimated at 125-300 years old has been returned to Cambodia after being illegally traded to and stored in Thailand by unethical antique traders more than 30 years ago, according to the chief monk of Chanppak Chotanaram Pagoda.

On the morning of September 5, venerable Son Chan Chivak Chanmony, chief monk at Chanppak Chotanaram Pagoda, also known as Ta Sot Pagoda, told The Post that the expert officials of the General Department of Heritage of the Culture Ministry told him the Buddha statue is made of bronze and is 65 centimetres in height, 46 centremetres wide and has no throne for a total of 28.7 kilogrammes in weight.

The eyes of the statue are now missing but were likely precious diamonds, though they have long since disappeared.

“According to experts, this Buddha statue was cast between the 18th and 19th centuries during the reign of King Norodom,” the monk said.

Venerable Son Chan Chivak Chanmony said that on July 29 of this year he visited the home of some Thai Buddhists in Bangkok and saw the Buddha statue.

Because of the style of it, he was suspicious that it could be a Khmer Buddha statue and he asked about the history of the object.

“The Thai Buddhist right away told me that his father bought the Buddha statue from an antiques dealer from Cambodia around 1988 or 1989. He said that the eyes of the statue were removed by the Cambodian antique traders and sold separately, while the statue was sold to his father for THB550,000,” he recounted.

After learning how much it meant to the chief monk and considering the tragic history of Cambodia and how the loss of such objects is tied into it, the Thai owner – a devout Buddhist – agreed to return the statue to Cambodia and did so on September 4. It is presently being kept at Chanppak Chotanaram Pagoda.

Director-general of the General Department of Heritage at the Culture Ministry Ouk Sokha told The Post that his team of experts is going to go inspect the statue because they haven’t gotten any official reports or documents from the pagoda sent to them yet.

“At present, our team is inspecting the style of the Buddha statue to try and date it and determine its origins,” he said.