In Lahiri’s latest, the interpreter of vapidities

Since Papa published The Sun Also Rises in 1926, a subgenre of literary fiction has swelled around Depressed Guys Wandering. For a certain kind of dead serious writer, it is an irresistible pose. Stripped of anything so lowbrow as a plot, these slim, grim novels offer a flatlined vision of life reduced to its terrifying aimlessness. You can spot such books because they are praised as “exquisitely nuanced”, and they are exceedingly tedious.

One thing that can be said about Jhumpa Lahriri’s new novel, Whereabouts, is that by adding to this grey subgenre, it strikes a victory for female representation. Lahriri, who won a Pulitzer Prize in 2000 for her first collection of stories, Interpreter of Maladies is a careful explorer of subterranean emotional pain. She wrote Whereabouts in Italian and then translated it into English, which contributes to its sheen of deliberateness and distance.

The story is about a lonely, unnamed woman in Italy, where Lahiri lived for several years. The narrator tells us early on, “I’m saturated by a vague sense of dread.” If publishing were just a little more savvy, every copy of Whereabouts would come with a coupon for online therapy.

The novel is presented as a series of brief moments, with titles like On the Sidewalk, At the Cash Register and the most accurately labelled In My Head. Most of these chapters describe some minor experience in the city.

A few recall dispiriting interactions with her parents or recent romantic humiliations. The narrator – single, 46 – records these depressing events in little notebooks that she buys “at the end of every year at the same stationery store, always the same size and number of pages”. These notes are no idle fancy. 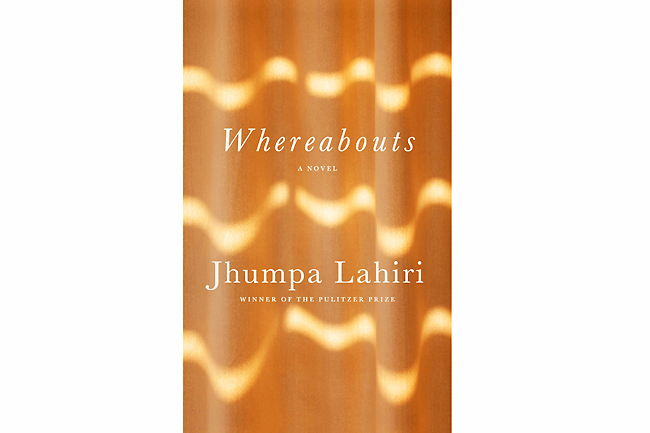 “Solitude demands a precise assessment of time,” she said. “It’s like the money in your wallet: you have to know how much time you need to kill.”

Although Whereabouts is not a long novel, it offers plenty of time to kill. In place of a traditional plot, we’re given vignettes of quiet despair or anecdotes of minor irritation all distilled into a syrup of poisonous self-absorption.

At times, I was tempted to hear a note of parody in the narrator’s relentless melancholy. After a friend’s two-year-old draws a mark on her sofa, the narrator decides never to sit on it again. “In spring, I suffer,” she said.

“The green of the trees, the first peaches in the market, the light flowing skirts that women in my neighbourhood start to wear. These things only remind me of loss, of betrayal, or disappointment.” It comes as no surprise to hear that as a child she hated recess.

Despite her general sense of alienation the narrator remains an inveterate people watcher. In fact, her vampiric interest in strangers generates much of the novel’s content. Spotting an older woman at her favourite museum, for instance, she invents a full backstory: “I bet she’s in the city by chance, maybe tagging along behind her husband, who’s here for work and busy all day.”

During her semiweekly trips to the pool, the narrator listens to “the other women chat among themselves”. At one point, like the obsessed narrator in Edgar Allan Poe’s The Man of the Crowd, she feels compelled to follow a woman who looks like her around town.

All this attention to people is meant to emphasise the narrator’s alienation from others, not her connection to them. “I don’t share my life with anyone,” she said. She works as a teacher, but she tells us, “My heart’s not in it. Solitude: It’s become my trade. I eat alone, next to others eating alone.” Even the guy in the theatre box office feels sorry for her: “Just one ticket?”

Her most significant human contact takes place at the spa when she watches a young woman give her a manicure. “She proceeds to work on my nails,” she said. “She delicately eliminates the skin that grows round them. I see the little pile that accumulates, lifeless shards of myself.”

That phrase – “lifeless shards of myself” – cuts very close to the theme of Whereabouts. Death is a constant refrain in these scenes, which offer an eerie foreshadowing of the pandemic’s isolation. When the novel opens, the narrator is passing a plaque on the road where a man once died. She works in an office whose previous occupant died. “Maybe,” she offers, “that’s why this room feels a bit sepulchral.” Could be. At lunch, she notes that the chef’s wife died. Her ex-boyfriend’s parents died. Her own father died when she was 15. One day on the beach, she said, “The sun was so strong I thought I might die.”

This preoccupation with death reaches an absurd peak during a brief vacation – alone – in the countryside. “Before entering the house,” she said, “I noticed something on the path. A small grey creature. I know it’s dead, and I, too, immediately stiffen. It’s a mouse. Even though I turn my head away I’ve already seen enough: a delicate, curved tail in the dense, soft coat of fur. But the really disturbing thing is that it’s missing a head. It’s been sliced off. How? And why? Was it another animal that did it?”

Honestly, what are the options when it comes to a decapitated mouse? Colonel Mustard in the library with the candlestick?

I’m not mocking out of meanness; it’s partially a defence mechanism. Depression is a perfectly legitimate subject for fiction, of course, and who knows it’s an exigent aspect of modern life. But the insular nature of the condition makes it extraordinarily difficult to render in an emotionally compelling way.

The late, great Anita Brookner managed to pull off that feat to haunting effect, but in Whereabouts, descriptions of chilled despair have been so aggressively honed that there’s little for us to hang on to but the sighs.