In Kevin Wilson’s ‘Now Is Not the Time to Panic’, two kids cause panic

THE WASHINGTON POST – Kevin Wilson’s titles, including The Family Fang and Perfect Little World suggest the doleful ironies of his work. Three years ago, he published Nothing to See Here, a quirky novel about children who burst into flames when they’re angry. As a parable of the dangers of childhood – and childcare – it was brilliant.

Wilson’s new novel is called Now Is Not the Time to Panic, yet another disingenuous phrase uttered only when things have gone very bad.

This time around, Wilson explores the tension between adolescent creativity and cultural paranoia, that urge to affect the world and the cost of doing so. Among other things, the story is an eerie reminder that the Internet didn’t invent viral memes or the mental web on which iconic images propagate.

In 1996, Frances – Frankie, to her friends – is a 16-year-old girl stuck in the dinky town of Coalfield, Tennessee. Her father has run off with his secretary to start another family, which includes a new baby named Frances. Watching boys wrestle with a greased watermelon in the public pool passes for high excitement. “I’d been normal,” Frankie says, but lately she’s felt alienated. “I wanted other things, but I didn’t know how to ask for them.”

That sweltering summer, which becomes the focus of this obsessively nostalgic story, will change Frankie’s life. She meets a new kid, Zeke, who’s been sent to live temporarily with his grandmother. 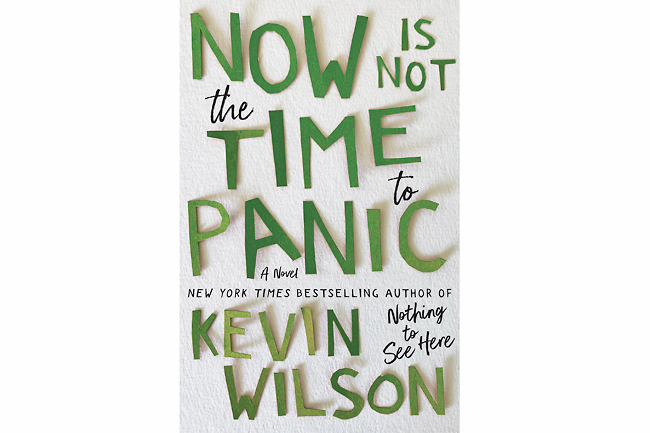 Their attraction is immediate. Frankie wants to be a writer; Zeke wants to be an artist. Bad dads give them something to commiserate over. There’s more than that, though.

“We were both so twitchy, so afraid,” Frankie says.

“We were completely bored out of our minds.”

Frankie’s busy mother worries about their relationship, but these two passionate kids discovered something more exciting: an old Xerox machine in the garage. “We could do something weird with this,” Zeke says.

Possessed by that vague but intense desire, Frankie grabs a pencil and focusses every bit of creative energy she possesses. In a burst of Coleridgian inspiration, she writes, “The edge is a shantytown filled with gold seekers. We are fugitives, and the law is skinny with hunger for us.”

“It was the greatest thing that I’d ever written,” Frankie claims. “It sounded so perfect to my ears.”

Zeke snatches the paper from her and illustrates it with a row of shacks and children in little beds lying in an open plain as two giant hands reach for them.

To sanctify this masterpiece, writer and illustrator mark the page with a drop of their mingled blood.

Frankie and Zeke exult in their profundity, but the real triumph here is Wilson’s. With what pure awe Now Is Not the Time to Panic captures the adolescent thrill of creation – a thrill beyond all reason, but no less powerful and transformative.

Although Wilson never mocks these young artists, he doesn’t obscure their naivete either.

“We invented some mantra that would unlock the mysteries of the universe,” Frankie thinks. “We’d created meaning where there was none.”

What exactly is that meaning, though? And who determines it?

Critics and philosophers have debated those questions for centuries, but Frankie and Zeke know only their uncontrollable impulse.

Determined to spread this magical image they’ve created, they use the Xerox machine to make 10 copies, then 10 more, then thousands more.

“It felt like alchemy,” Frankie says, “like all those brooms in Fantasia, like the world was finally big enough for the things that we cared about.”

Her allusion to Fantasia is apt, but Frankie seems not to remember how that film progresses. As she and Zeke begin surreptitiously tacking up their posters all over town, people notice, people get interested, people go crazy.

The novel contains no fantastical elements – no one bursts into actual flames – but the combustion that Frankie and Zeke spark is just as startling and sometimes just as destructive.

Music fans know the posters are advertising a new band; literature snobs know the quote is from Rimbaud; vigilantes know it’s all about recruiting young people a cult.

What could go wrong?

A preview last August in The Washington Post referred to Now Is Not the Time to Panic as “wildly funny”.

Humour is notoriously subjective, of course, but even by the gassy standards of book blurbs, that feels wildly exaggerated.

This story is much more likely to break your heart than your funny bone. Wilson is witty, to be sure, and he has a firm grip on the absurdity of domestic life, particularly families and their strange, terrarium-like realms. But if there’s comedy here, it’s steeped in melancholy.

Crucially, this strange summer of 1996 is framed in the novel as a set of wonderful and horrible events that took place 20 years ago during a worldwide spasm of anxiety about “the shantytown filled with gold seekers”.

Frankie recalls it all reluctantly at first and then with alarm.

Having built her adult life as a respected author, a good mother, a devoted wife, she’s terrified that her role in the Coalfield Panic of 1996 might be exposed.

As the story develops along these two tracks – past and present – Now Is Not the Time to Panic plumbs both the intensity of an early creative experience and the strange way such experiences get preserved in the amber of our minds.

The result is another tender, moving novel by an author who understands how truly bizarre ordinary life is.