TAMPA (AFP) – Baby manatee Lativa was so sick that her caregivers had to put a flotation device on her to allow her to come to the surface to breathe.

Others have not been so lucky: the gentle marine mammals are dying at an unprecedented rate in Florida, and there are not enough animal hospital “beds” to handle the crisis.

When two-year-old Lativa was rescued earlier this month, she was suffering from severe exposure to brevetoxins, potent neurotoxins produced by red tides or algae blooms that have contaminated some bodies of water in the US state.

“She was found beached and they never beach themselves… she was completely unresponsive,” recounted Molly Lippincott, animal care manager for ZooTampa at Lowry Park.

Lippincott showed a video of Lativa, her head resting on a pool noodle. Today, the manatee is breathing on her own, but is still being closely monitored in an intensive care tank next to Bellisima, who was found malnourished and seriously injured after being hit by a boat.

The red tides caused by human use of fertilisers, the loss of food sources in their natural habitat and the shocks caused by collisions with boats are among the leading causes of manatee deaths in Florida. 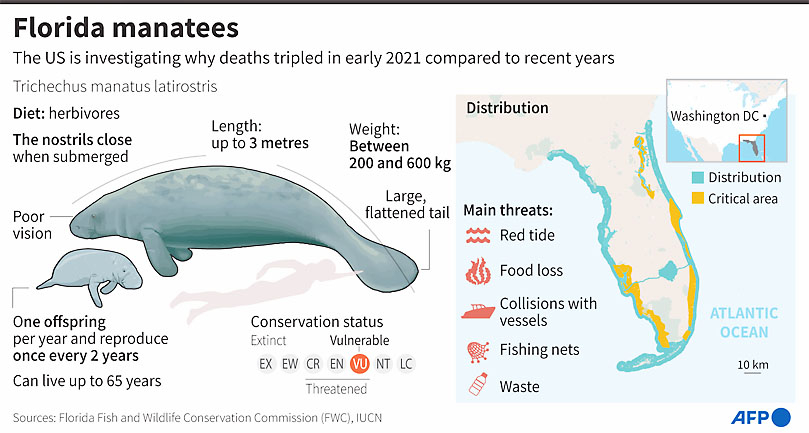 And this year, the death toll is skyrocketing.

From January 1 to mid-April, 674 manatees have been found dead in Florida waters, according to the Florida Fish and Wildlife Conservation Commission.

That is nearly triple the number of manatee deaths recorded in the same period in each of the previous five years.

“We’re just having a lot more issues environmentally, because there’s such a large number of people that live here now,” said Lippincott.

When the conditions of Lativa and Bellisima improve, they will be moved to recovery pools, where about 20 manatees are fed lettuce and cared for until they can return to their
natural surroundings.

There are five manatee hospitals in the Sunshine state. The one in Tampa is one of the biggest and has three intensive care tanks. The tank bottoms can be raised to care for
the animals.

But the shocking mortality rate this year has stretched these facilities to their limit.

Veterinarians are “trying to just figure out how to shuffle manatees so that you can free up the critical care facilities”, said the Senior Vice President of Animal Health, Conservation and Education at ZooTampa Cynthia Stringfield.

“But right now, it’s a juggling act to try to have space for everybody.”

Manatees, distant cousins of elephants, are playful warm-water giants who graze on seagrasses and live in shallow waters because they need to surface frequently to breathe.

Normally, an increase in the number of manatee deaths can be attributed to collisions with boats and jet skis that speed through the manatees’ habitat.

“When a manatee is coming up for a breath, that’s when they’re usually vulnerable and get hit by a boat,” Lippincott explained.

In zoo recovery pools, many of the animals have scars – a jagged line when the manatee hit a boat keel, or parallel stripes when it was hit by an outboard motor.

“They really move very slowly. They cruise at about five miles an hour, so they don’t have time to get away from boats. We need people to slow down when they’re in shallow water,” Lippincott said.

Florida does not require boat operators to have licences. Users just need to complete a course that does not include a lot of information about local wildlife.

And tourists who rent boats often are unaware that manatees even exist, even though there are 7,000 of them in the state.

The high number of manatee deaths so far this year on Florida’s eastern shores seems to be due in part to the disappearance of seagrass, which is not getting enough sunlight due to algae blooms flourishing from both fertiliser use and excess sewage.

Last month, the Florida Fish and Wildlife Conservation Commission classified the dire situation as an “unusual mortality event”, a rare move that unblocks federal funds for an investigation.

Many of these manatees, sometimes called “sea cows”, have been found suffering from malnutrition along Florida’s central and southern Atlantic coastline.

Complicating the already fraught situation, a breach at a wastewater reservoir on the site of a former fertiliser plant on Florida’s Gulf coast sent thousands of gallons of polluted water into Tampa Bay.

“We’re not seeing the effects of that yet, but we’re concerned that that could be an up and coming problem,” Stringfield said.

In May 2017, a few months after Donald Trump assumed the United States (US) presidency, federal authorities reclassified manatees, downgrading them from endangered to threatened – thereby reducing the protections afforded to them.