GIESBEEK, NETHERLANDS (AFP) – Angler Mark Kouwenhoven grins as he wades into what’s left of a dried-up Dutch lake where his colleagues are throwing slime-coated fish into buckets.

It’s not the kind of catch they’re used to – but that’s because this time they’re helping the government to save the fish from the drought gripping Europe.

Each fish will be moved nearby to the River IJssel, a Dutch branch of the drought-hit River Rhine that until recently had fed the lake with fresh water.

“It’s a dirty job but somebody has to do it,” said the 32-year-old Kouwenhoven, a member of the Eastern Netherlands Sportfishing Association.

“We’re fishermen, we care for the fish, we don’t want them to die. We love fish!” he added, dressed in a pair of long waterproof waders.

The Netherlands is famed as a “land of water” where canals and dikes protect against rising seas, but the country declared an official water shortage earlier this month.

One key factor in the drought has been the low water levels in the Rhine.

Europe’s mighty river rises in Switzerland and flows through several countries including France and Germany, before flowing into the sea in a huge delta in the Netherlands. 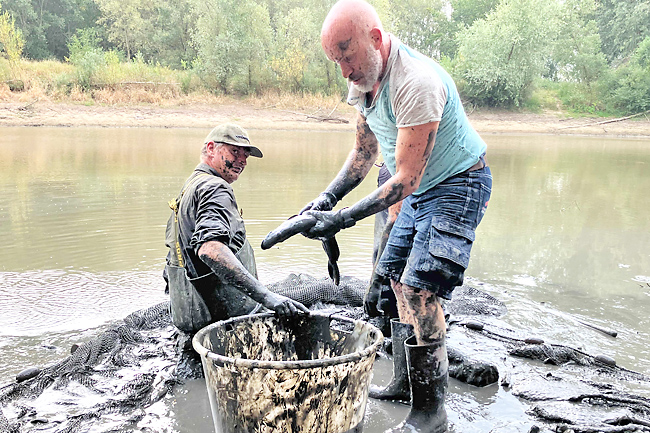 Dry, parched banks are now exposed to the air along the Dutch distributaries of the Rhine such as the Waal, the Nederrijn and the IJssel. The water in the small lake near the town of Giesbeek used to be about a metre higher, with fish swimming in from a channel from the IJssel, but is now down to about 10 centimetres, anglers said.

A beaver that used to live there has left, abandoning its dam.

Volunteers from a number of angling clubs have now carried out several missions to help the stranded fish, working alongside the Rijkswaterstaat, the Dutch water management ministry.

“We use a big net, we lay it out through the pond, through the lake and we reel it in, using the volunteers to gather all the fish in a small space. From there we can put them into baskets and we bring them to the river,” said Kouwenhoven.

One bare-chested angler sits waist-deep in the slime to hold one end of the huge, weighted net while his colleagues spread it out over the surface of the water.

By the end of the process, teams of fishermen are plucking huge carp, bream and pike out of a frenzied, thrashing puddle, as mud flies in all directions.

The baskets are then rushed about 50 metres away and released into the IJssel.

The fishing clubs have been called out to help on occasion over the last five, dry years but Kouwenhoven said that “this year’s exceptional. We haven’t had this many cases before”.

Surveying the operation from the bank, Rijkswaterstaat official Geert Wieggers said he’s “surprised” by the size of the catch, which he estimated at around 2,000 kilos.

The 65-year-old described the water situation in the eastern Netherlands as “critical”.

“It’s terrible for wildlife,” he said. “Not only for the fish but also for the birds and everything.

A year ago dramatic floods in the same area left a trail of damage in the Netherlands “and now we don’t have enough water”.

Despite a brief downpour before the fish rescue expedition, the Netherlands has seen barely any rain for months.

“We pray for rain and we do what we can,” he said.

And while headlines about the Rhine’s low water levels have focussed on disruptions to river transport in Europe’s economic powerhouse Germany, the Dutch point out that they are also suffering.

Barges on the Rhine could only take around 25-30 per cent of their normal cargo because of the low water levels, Wieggers said.

“All the water goes to the Netherlands, so if there’s drought upstream you can wait for it to happen here too,” added the angler Kouwenhoven.