SANTOS, BRAZIL (AFP) – It’s best to watch your step in Dique da Vila Gilda, a slum on stilts where the rickety walkways across the fetid water below the tin-roof shacks sometimes break beneath people’s feet.

Deise Nascimento dos Santos, a 54-year-old resident of the neighbourhood – which holds the title of Brazil’s biggest favela on stilts – learnt that lesson the hard way: with 23 stitches, the result of a nasty fall outside her house. “If you fall here, you stay here,” she said.

Built on spindly wooden legs above the mangroves at the edge of the Bugres river, Dique da Vila Gilda is part of Santos, a city on Brazil’s southeastern coast known for its beachfront gardens and the largest port in Latin America.

But the favela is a world apart from the resort district, a getaway for weekenders from wealthy Sao Paulo.

Here, the waterfront is putrid and littred with trash, houses are made of rusting metal and warped wood, and residents struggle to scrape out enough to survive.

The coronavirus pandemic – which has claimed more than half a million lives in Brazil, second only to the United States – has deepened the already stark inequalities dividing places like Dique da Vila Gilda from the more privileged side of town.

But COVID-19 is just one on a long list of woes in the slum, which was started – like most favelas – by rural migrants who arrived in the city looking for work and built impromptu houses in the only space they could find. 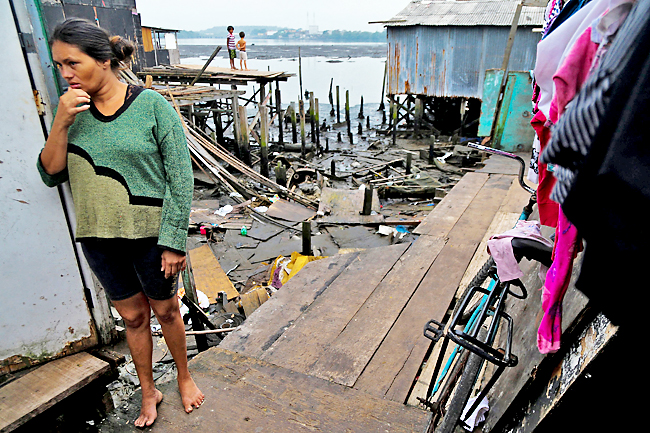 She spends nearly 70 per cent of her pension to pay the BRL500 (USD100) rent on the shack she shares with her son, even though the floor is water-damaged and there is a gaping hole in her bedroom through which she can see the river below.

Her biggest fear is dying in a fire, like the one that razed several of her neighbours’ houses in April.

“It was horrible – the sound of the wood crackling. All I could do was pray to God the flames wouldn’t spread here,” she said.

The favela is a maze of makeshift walkways between the shacks, the gaps in the boards patched with scraps of wood and cardboard.

Below, trash cast off by the community’s 26,000 inhabitants accumulates in the foul-smelling water. “I wouldn’t even say we’re getting by. Getting by would mean having food on our plates, jobs, education, decent housing,” said Lucileia Siqueira de Santos, 39.

She rails against President Jair Bolsonaro, who she said is failing poor Brazilians.

She calls him a “genocidal maniac”, a line the far-right leader’s critics use to condemn his anti-mask, anti-lockdown pandemic response.

But the frustration goes deeper than that. The pandemic turned an already desperate situation worse, costing many people in the favela their jobs, she said.

“Everyone’s talking about COVID, but we’ve got a lot of other problems,” she told AFP.

A single mother raising her six children in a small two-room shack, she lost her job as a nanny because of the pandemic and is now surviving on handouts.

She resents the lack of schools and Internet to educate her children. “The politicians only come here when they need our votes. This place is a ticking bomb,” she said.

She has escaped COVID-19 so far, but contracted chikungunya, the mosquito-borne viral infection.

The crowded conditions and lack of sanitation in the favela leave residents highly exposed to communicable diseases.