BOSANSKA BOJNA, BOSNIA AND HERZEGOVINA (AFP) – “We will try again,” Mohammad Amin Ibrahimi, a teacher from Kabul, said as he looked west towards the hills of neighbouring Croatia, a country he has tried to enter 30 times in his dream to bring his family to the European Union (EU).

For the past six months, each attempt has been cut short by Croatian border police, who have pushed them back to Bosnia, where Ibrahimi is currently sheltering in an abandoned house with his wife and two-year-old daughter.

The bleak conditions for their family and thousands of other EU-bound migrants bottlenecked in Bosnia have provoked harsh words from Brussels, which has demanded the Balkan state provide proper housing for the travellers struggling to survive in the bitterly cold and snowy winter.

But the migrants themselves have no desire to stay put – it is the EU they want to enter, and they said their problems would be solved much faster if the bloc opened its doors.

“We want to apply for immigration in Croatia” and then go to Slovenia or Italy, Ibrahimi, who is in his 30s, told AFP.

His daughter Mahsa, sneezing as she played with a doll, has been struggling since the start of the winter, he said. 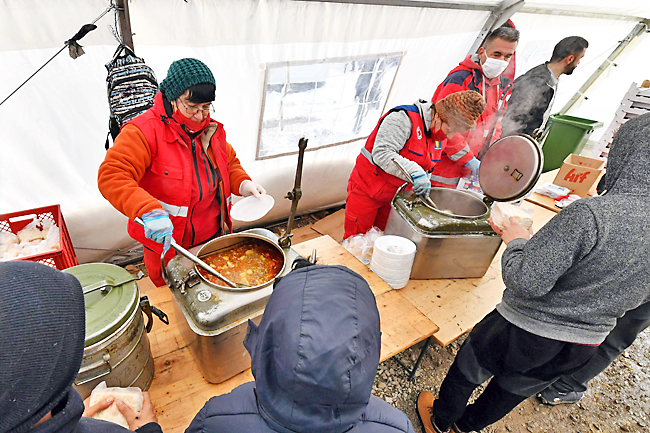 Even though visibly ill, she and the family have been repeatedly deported by Croatian border police, who also allegedly smashed Ibrahimi’s mobile phone – a lifeline for migrants on the move.

The Ibrahimis are now regrouping in the derelict house, which lacks running water and whose unfinished walls and floors are covered with rugs and blankets.

They share it with two other Afghan families in the tiny, mostly deserted border village of Bosanska Bojna.

Under the light of a bare bulb, the women prepare supper on a woodstove – the only heat source – with ingredients donated by sympathetic locals.

Despite their tough existence, Ibrahimi said he would do it all again.

“We are not safe in Afghanistan,” he said.

Since 2018, Bosnia has become a key thoroughfare for tens of thousands of people fleeing war and poverty in the Middle East, Asia and Africa.

For the more than 8,000 migrants currently in the country, Croatia is the next step on perilous journeys towards Western Europe.

Yet, once they arrive at the border, they often face pushbacks by police who have been repeatedly accused of violence.

This has led to a build-up of several thousand migrants around Bosnia’s northwestern town of Bihac.

While most are staying in United Nations (UN)-run centres, hundreds of others are squatting in abandoned houses, factories or in makeshift camps in the woods.

Locals in Bihac have become increasingly frustrated with shouldering the burden of the EU’s asylum system, which rights groups say shifts responsibility for migrants onto border countries or external neighbours like Bosnia.

While hundreds of migrants, including children, have been left out in the cold, local authorities in Bihac refuse to re-open a centre funded by the EU, which has provided some EUR90 million in aid over the past three years to help Bosnia manage migration.

The centre once housed men in downtown Bihac but was closed by authorities in response to public opposition and locals have been standing guard to block its reopening.

Sej Ramic, an art teacher who is organising gatherings, lambasted the EU as “hypocritical”.

They are “trying to turn Bosnia into a parking lot for migrants that they themselves don’t want”, he told AFP.

“EU also has dirty hands,” added Lejla, a 50-year-old teacher at a recent protest. “They tell us what to do in our home while keeping their own borders closed.”

In addition to inhumane living conditions, some migrants have faced outright hostility in the region, such as when locals tried to block the passage of buses transporting them to a new camp.

Yet both sides share a similar message for the EU.

“My only request to the UN and EU is to please open the border and let refugees go,” said Rashid Mahmud, a Pakistani driver who has been marooned in Bosnia for more than two years.

With dreams of reaching Spain or Portugal, he has tried the “game” – how migrants describe attempted border crossings – 27 times.

The 36-year-old is now camping with around a dozen others in a thicket near the border, sleeping in improvised, snow-covered tents.

He previously stayed in a camp in the nearby village of Lipa, which burned down last December, leaving more than 1,000 migrants without shelter.

After more than a week, during which the camp’s former inhabitants were left to fend for themselves in the snow, Bosnia’s army stepped in and set up heated tents.

While it may take numerous attempts to beat the “game”, most migrants eventually do, with some 100,000 estimated to have reached EU countries in the past three years, according to Regional Interior Minister Nermin Kljajic.

The “EU can return them to Bosnia but they will retry 1,000 times until eventually getting into a country they desire”, he told AFP.

A healthy person can walk through the woods from Bihac to Italy – crossing Croatia and Slovenia – in 24 hours, Bihac’s Mayor Suhret Fazlic said.

Ibrahimi is now preparing for his 31st try.

“Maybe this time I will have a chance for immigration (approval) in Croatia.”