THE WASHINGTON POST – I couldn’t take it anymore. Six months into the pandemic, when the travel itch became unbearable, I quelled my misgivings and took a 17-day trout-fishing trip to Montana and Wyoming. Fly-fishing is a solitary pursuit, and I figured those states would have built-in social distancing. After all, they rank second and third in the country – behind Alaska – for fewest people per square mile.

In addition to a surplus of wide-open spaces, both states have a blend of majestic mountains and sprawling high desert. Much of the region is more than a mile high in elevation. These are states of extremes: One day in Montana’s Madison River Valley, a 37-degree morning turned into a 99-degree afternoon. And both states have a top speed limit of 80mph, ramping up the feeling of freedom on the open road.

There wasn’t an empty seat on my August flights from Norfolk, Virginia, to Billings, Montana. Wearing a mask from the moment you enter the airport until you leave on the other end – 11 hours straight, in my case – is no fun, but what a relief when you can finally take it off. Once behind the wheel of my Mazda 6 rental, windows and sunroof open, the claustrophobic feeling quickly faded.

After landing in Billings, I took a scenic route south: the Beartooth Highway, designated “the most beautiful drive in America” by roving CBS correspondent Charles Kuralt. A series of 180-degree switchbacks take you up to the Beartooth Pass at nearly 11,000 feet, with the valley unfolding far below. 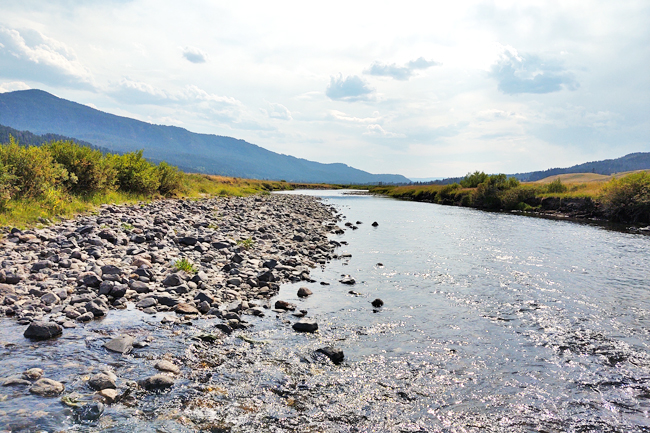 Although I spent my first few nights in predictably touristy West Yellowstone, the gateway to Yellowstone National Park, I soon discovered that Montana has a bounty of charming little towns. Before I hit the streams, I spent a day exploring the southwestern part of the state. The welcome sign outside Ennis says: “Population 840 people, 11,000,000 trout.” And at a flyrod shop in tiny Twin Bridges I was met with an unironic “Gone fishin’ ” sign.

I rarely use fishing guides – they can be very expensive – but they’re worth every penny. For my first day on the water I hired Patrick Daigle of Blue Ribbon Flies, a fishing outfitter based in West Yellowstone. He seemed to know every hiding spot for the big rainbow and brown in Hebgen Lake and the Madison River.

Patrick’s coaching was a priceless foundation for Blue Ribbon’s four-day pack-in on Slough Creek in the northeast corner squite like a gear list that calls for bear spray. I dutifully bought a USD37 can of Counter Assault Bear Deterrent – “Developed by a Grizzly Bear Encounter Survivor!” – but never did see a bear.

I drew Buttercup in the mule lottery for the eight-mile ride to camp. There were just seven anglers in my group, but with a guide – Patrick again – and three wranglers, it took 28 mules to haul us and the supplies. Once we were forced to detour around a stubborn buffalo who had claimed the trail.

The food was excellent: I’ll never forget waking up to the aroma of four pounds of steak sizzling over the campfire. TJ, the cook and head wrangler, made flapjacks on a slab of cast iron that was once a washing machine lid. His “cowboy coffee” – just grounds in hot water – was guaranteed to give you a jolt.

For four days, we fished, ate and chilled in a postcard setting. There were rumbling thunderstorms, and the soothing sound of rain on the tents put us to sleep at night. Masks were not part of the attire, or conversation, but we gave each other plenty of space. And wisely, there was a loose rule around the campfire: no politics.

After breakfast, we’d fan out from the camp, which was a mile from the stream, and go our own way until dinner. Even with a half-dozen other fishermen, there were two days when I never ran into another soul on the water.

Slough Creek is regarded as one of the best anywhere for the distinctive cutthroat trout, with its red slash on the lower jaw. Stalking them from the banks or while wading was a real thrill. The Slough is catch-and-release and anglers’ must use barbless flies.

I caught anywhere from three to seven a day. That might not sound like much, but few things compare with having a 20-inch cutthroat on the end of your line, letting him make a few runs, fighting the urge to rush him to the net while not playing him too long. And always, taking great effort to get him unhooked and back into the water quickly. On our last day, the sky turned hazy: Smoke from the West Coast fires 1,000 miles away had worked its way to us.

After the pack-in, I headed toward Cody, Wyoming, via another spectacular route, the Chief Joseph Scenic Byway. I doubt Kuralt ever saw this one – it wasn’t finished until 1995, and he died in 1997 – but it’s every bit as stunning as the Beartooth, with dozens of irresistible pullouts offering panoramic vistas.

Like West Yellowstone, Cody is a gateway town to the fabled park. Known for its old-style rodeos, it’s drenched in cowboy-themed restaurants, shops and hotels. From there, I skipped around northern Wyoming trying several waters: the Greybull, Shell Creek, North Fork Tongue. Some were barely trickles, but with patience I found a few nice fish in the small runs and pools.

This is dinosaur country, where ancient oceans left sculpted bluffs and exposed fossils. A few hours southeast of Cody is Thermopolis, home to the Wyoming Dinosaur Center, which chronicles the fascinating history of not just the evolution of dinosaurs, but the planet itself. The town boasts another geological wonder as well – Hot Springs State Park, one of the country’s largest hot springs complexes. In addition to the requisite waterslides, the park has plank walkways from which visitors can see the water’s colourful mineral deposits.

Many Wyoming and Montana towns have names of Native American origin. Others bear the mark of early settlers: Opportunity, Phosphate, Pitchfork – much more colourful than the numerous East Coast city names borrowed from England. I spent three nights in Greybull, a quaint one-stoplight town about an hour east of Cody. Just to the east are two off-the-beaten-path curiosities, both down long, dusty roads. The Devil’s Kitchen looks like something from another planet, with badlands-type rock formations spawned eons ago. A little farther east is the Red Gulch Dinosaur Tracksite, where visitors can actually walk on prehistoric footprints – although I tried and they’re really, really hard to make out.

A bit to the northeast is another hidden gem: the Bighorn Medicine Wheel. The sacred arrangement of stones, a National Historic Landmark, sits on a summit almost 10,000 feet high. It’s about a three-mile round trip walk from the parking lot, but worth it. Native Americans still worship there, and visitors are cautioned to be quiet and respectful.

From Greybull it was back to into Montana, which included my third drive through Yellowstone. The park was jammed with RVs, campers and bulky bison moseying down the middle of the road.

My next stop was Butte, where abandoned derricks are scattered across the landscape, some lit up at night. A featured attraction in the quiet city is the Berkeley Pit, a former open-pit copper mine. Now a 900-foot deep lake filled with toxic water, it is the nation’s largest Superfund project – even so, it has a visitors’ centre and gift shop.

In Montana, I waded more trophy trout streams: Rock Creek, the Big Hole River, the Bitterroot. They never disappointed, even when the action was slow, or I had to share the stream with a few more folks than I preferred.

Back in Billings, I had time for one last adventure before my flight home: exploring the Rimrocks, distinctive sandstone cliffs that frame much of the city. Formed 80 million years ago when the area was on the shores of the Western Interior Seaway, the cliffs are still being carved away by the Yellowstone River.

My only regret was seeing more of the terrain than the locals. To a person, I’d found them warm and friendly: Polite, helpful, quick to offer directions or recommend a place to eat. At the time, Montana required masks, and Wyoming did not. In both states, retail and restaurant workers in the cities usually wore them, but in the smaller towns almost no one did.

Usually on a trip like this, I would spend more than a few hours in neighborhood taverns – or in this case, saloons. But not this time.

I fished for 12 of my 17 days, putting more than 2,800 miles on my rental car, many of them rattling down gravel, potholed, backcountry roads. The deeper in you go, the farther upstream you get and the less crowded it is. One day, my only companions were a pair of soaring bald eagles. On another, two moose and a herd of cows.

On the open road, it was easy to pretend life was back to normal.