Importance of ADMM Plus stressed at regional defence meeting

The 9th ASEAN Defence Ministers’ Meeting Plus (ADMM Plus) concluded at the Sokha Siem Reap Resort and Convention Center in Siem Reap, Cambodia yesterday where Cambodian Prime Minister Samdech Akka Moha Sena Padei Techo Hun Sen recognised the importance of ADMM Plus as a critical platform towards building solidarity, mutual understanding and serves as a key avenue to exchange views on the regional security landscape in a candid and harmonious manner.

The prime minister underscored the importance of multilateralism in promoting comprehensive security around the region.

He made these comments in his keynote address to officiate the 9th ADMM Plus.

He was accompanied by Permanent Secretary (Policy, Finance and Administration) at the Ministry of Defence (MinDef) Colonel (Rtd) Norsuriati binti Haji Sharbini as Brunei Darussalam’s ASEAN Defence Senior Officials Meeting Plus (ADSOM Plus) leader and other senior officials from the MinDef. 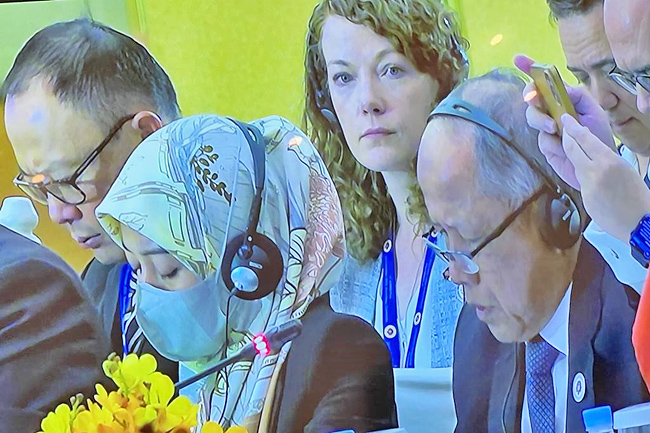 The morning programme began with the joint courtesy call by the ADMM, ADMM Plus defence ministers and representatives and the ASEAN Secretary-General Dato Paduka Lim Jock Hoi on the Cambodian Prime Minister.

Under the theme ‘Solidarity for Harmonised Security’, the ministers exchanged views on regional and international security matters. They reaffirmed their commitment to the maintenance of peace and stability in the region.

The meeting concluded with the adoption of the joint declaration by ADMM-Plus Defence Ministers on Defence Cooperation to Strengthen Solidarity for Harmonised Security.

A handing over ceremony of the ADMM Chairmanship from Cambodia to Indonesia officially marked the end of Cambodia’s chairmanship for 2022. Indonesia will assume the role as chair for ADMM and its related meetings for 2023.