THE WASHINGTON POST – The objects in the tomb of the pharaoh Tutankhamen – or, as a new exhibition at the National Geographic Museum spells it, Tutankhamun – were meant to commemorate the Egyptian ruler’s life and guide him to the next one. Since they were first unearthed almost exactly 100 years ago, such exquisite artefacts as the golden funerary mask of Tut, as he is more commonly known today, have attracted widespread interest and admiration. But Beyond King Tut: The Immersive Experience emphasises nonmaterial aspects of the boy king’s significance. Its centrepiece is an animation of the dead king’s journey to the afterlife, as imagined from the text known as the Egyptian Book of the Dead.

The organisers of this almost entirely virtual-reality exhibition didn’t have much choice but to take this approach, since the relics from Tut’s tomb are no longer available for display outside Egypt. The show features some impressively set-designed spaces that evoke tombs, caverns and the pharaoh’s burial chamber, complete with an oversized reproduction of his sarcophagus. The bulk of the exhibits, however, are constructed of nothing more substantial than sound and light.

‘Beyond King Tut’ was produced by the partnership of Paquin Entertainment Group, which devised the ‘Beyond Van Gogh’ and ‘Beyond Monet’ exhibitions, and Immersive Experiences, a firm whose creative producer, Mark Lach, supervised the design of ‘King Tut: The Golden King and the Great Pharaohs’, an artefact show that toured between 2004 and 2012.

In the first room, we are introduced to Tut, who died at 18 or 19 years old, circa 1323 BCE, and the November 1922 discovery of his debris-buried tomb by Howard Carter, a British artist and self-taught archaeologist. After this prefatory video ends, a door automatically slides open, giving access to a chamber that evokes the exterior of Tut’s royal tomb, the only largely intact one ever found in Egypt’s Valley of the Kings.

Carter and his financial backer, the Earl of Carnarvon, hosted the international press in 1923 but didn’t allow most of the visitors to enter the crypt. (Among those excluded was National Geographic correspondent Maynard Owen Williams.) The seemingly weathered walls in this gallery feature simulated gaps that reveal flickering video images of such Tut-related relics as a statue of Anubis, the dog-headed god of death. These glimpses evoke Carter’s first peek into the tomb. 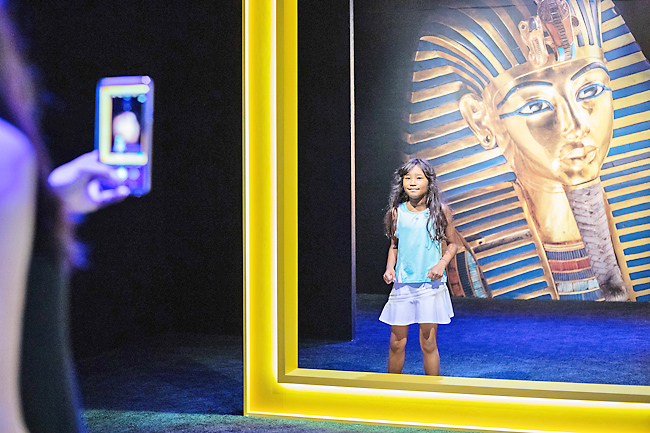 The museum’s 3D theatre holds the simulated sarcophagus and an illustrated video lecture that sweeps across three walls. One of its themes is the way animals represented many aspects of Pharaonic Egypt and its ruler. The vulture stood for Upper Egypt, for instance, and the cobra for Lower Egypt; both were included in the regalia of Tut, who presided over the united regions. Also symbolic were 12 baboons, one for each hour of the late king’s supposed transit through the netherworld.

Beyond is a gallery that recounts Tut’s life, as told by the artefacts in his burial place, such as a knife and scabbard, a ceremonial staff with a curved head, and pottery embellished with hieroglyphics. Also displayed there is a family tree, based partly on DNA research that is ongoing.

As you walk down a long corridor, you’ll pass four clusters of video screens that flash images and text, leading to a large photo cutout shaped like Tut’s funerary mask. His golden visage is bathed in light that moves continually, seeming to change its appearance.

The main event is a fanciful 20-minute video that depicts the first night of Tut’s afterlife, during which he supposedly battled a giant serpent and was judged by the deities: The requirement for a pharaoh’s eternal survival is a soul that’s lighter than a feather. The story unfolds in animated images projected on all four walls, as well as the floor, which at one point blazes with video fire beneath your feet. In this Disney-like telling, King Tut – said to be frail and sickly in real life – was heroic and noble.

No one will ever know how true that characterisation is, but for a century, the wonders excavated from Tut’s tomb have sparked imaginations worldwide. ‘Beyond King Tut’ is better informed than most treatments of the boy pharaoh’s legacy, but it doesn’t resist flourishes of fantasy.

The boy king, whose life story unfolds in this virtual-reality narrative, left an outsize legacy.

– King Tut, who was installed at age eight or nine and died a mere decade later, was a lesser pharaoh. But for the last century, he’s been one of the best known. That’s because his tomb has yielded the most artefacts of any ancient Egyptian ruler.

– Tut, who left no heirs, was the last of his family to rule during Egypt’s 18th Dynasty. He was the son of Akhenaten, who converted Egypt from polytheism to the worship of one divine being: Aten, a sun diety. During Tut’s rule, the traditional deities were restored, including Amun, in whose honour Tut changed the ending of his name, which may mean “living image of Amun.”

– The cause of Tut’s death is unknown, but most scholars attribute it to natural causes. Medical experts have suggested the young pharaoh suffered from malaria or sickle cell anaemia.

– Some of the actual objects from Tut’s tomb were exhibited at the National Gallery of Art and other American museums beginning in 1961. The larger exhibition ‘Treasures of Tutankhamun’ began its tour at the National Gallery in 1976 and travelled to six other United States cities. Such pieces are unlikely ever again to leave the Cairo region, where they will dwell in the Grand Egyptian Museum, set to open later this year.

– Tut-mania has inspired lots of pop culture, including The Mummy, a movie franchise that began with the 1932 Boris Karloff vehicle, and King Tut, Steve Martin’s 1978 novelty hit. Both are referenced in the final room of ‘Beyond King Tut’.