If plants, animals and machines are intelligent, what does it mean for us?

THE WASHINGTON POST – If you plan on reading James Bridle’s Ways of Being – and I cannot recommend highly enough that you do – you might consider forming a support group first.

The ideas in this book are so big, so fascinating and yes, so foreign, you are going to need people to talk to about them. Have your people on speed dial, ready to go.

And make sure you set aside a good amount of time for reading. You probably won’t be reading this book once. You’ll want to read it several times. This book is going to stretch you.

Bridle’s opening question to us is: What does it mean to be intelligent? There are many qualities we might list to describe intelligence: the capacity for logic, reasoning and comprehension; the ability to plan; problem-solving; emotional understanding; creativity.

But one of the most significant definitions of intelligence is: what humans do. When we speak of something being intelligent, we typically mean something that operates at the same level and in the same manner as we do. We tend to think that humans are the sole possessors of intelligence. It is what separates us from “lower” beings.

That’s the first hurdle you have to get over. Bridle steadily makes the case that what you thought about intelligence may not be exactly right, and who you thought was intelligent might not be right, either. No, we aren’t talking about that co-worker who isn’t the sharpest tool in the shed. We aren’t talking about humans at all. Bridle wants us to consider the intelligence of animals. Of plants. Of machines. 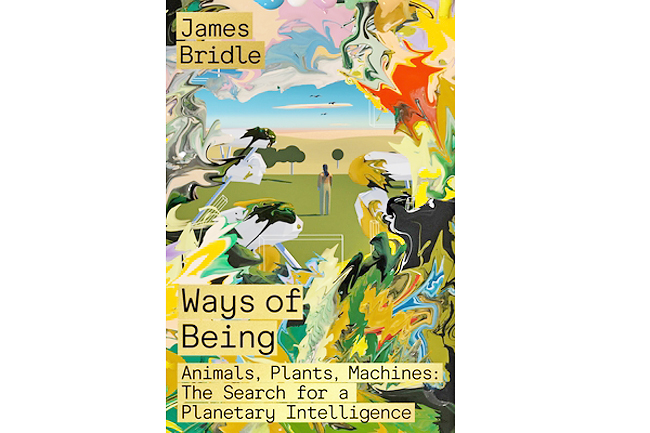 To do this, we must be open to the idea of a “more-than-human world”. This is a world in which we do not separate ourselves from nature. We do not look at the world as being full of lesser creatures.

Bridle tells us: “The world is made up of subjects, not objects. Everything is really everyone, and all those beings have their own agency, points of view and forms of life.”

We are introduced to the concept of “umwelt”. It comes from the 20th-Century German biologist Jakob von Uexküll. The word translates to “environment” or “surroundings”, but it refers to “the particular perspective of a particular organism: its internal model of the world, composed of its knowledge and perceptions”.

Bridle gives us the example of a parasitic tick.

The umwelt of the tick is concerned with three factors: the smell of butyric acid, which indicates to the tick there is an animal nearby to feed from; a temperature of 98.6 degrees, which indicates the presence of warm blood; and the hairiness of mammals, which the tick must navigate to reach its meal.

These three specific things make up the tick’s universe.

Bridle says: “Crucially, an organism creates its own umwelt, but also continuously reshapes it in its encounter with the world… Everything is unique and entangled. Of course, in a more-than-human world, it’s not only organisms which have an umwelt – everything does.”

So, the tick’s world revolves around those three things, and it acts accordingly. Does that make it intelligent? It rather depends on the yardstick you are using to measure intelligence. Humans are so human-centric, we don’t always ask the right questions. A classic intelligence test is to see if a subject can solve a problem by using a tool.

A tempting piece of food might be attached to a string and placed just out of an animal’s reach. By pulling on the string and drawing the food near, the animal demonstrates the ability to recognise a problem, think it through, make a plan and carry it out. The animal has demonstrated its intelligence.

Researchers have been playing this game with chimpanzees, gorillas and orangutans for decades.

“But early tests on gibbons, another primate, failed miserably. The gibbons made no effort to retrieve the food. So… gibbons are stupid? Not exactly. Gibbons are arboreal. They live in trees.

To make climbing and swinging easier, gibbons have elongated fingers. This makes it harder for them to pick up objects lying on flat surfaces. Dragging food across the ground by a string isn’t a natural gibbon scenario. Researchers tried again. This time, they hung the food from the ceiling with strings.

Only then did the gibbons recognise a familiar problem – finding food in trees where they live – and they tugged on the strings to retrieve the food. The gibbons didn’t suddenly become intelligent.

The original test missed out on what makes them smart.

The task is to figure out how to become aware of it, to associate with it, to make it manifest.

This process is itself one of entanglement, of opening ourselves to forms of communication and interaction with the totality of the more-than-human world… It involves changing ourselves, and our own attitudes and behaviours, rather than altering the conditions of our non-human communicants.”

I can’t do justice to the book’s explanation in this short review, but trust me, you will believe it.

“You will believe what Bridle has to say about machines and artificial intelligence, too.
You soon come to understand, as Bridle argues, “everything is intelligent, and therefore – along with many other reasons – is worthy of our care and conscious attention.” In the author’s view, intelligence is relational, and all organisms are interconnected. We share this world. You, me, your dog, ticks.

Bridle writes: “What matters resides in relationships rather than things – between us, rather than within us. . . . Intelligence is an active process, not just a mental capacity. By rethinking intelligence, and the forms in which it appears in other beings, we will begin to break down some of the barriers and false hierarchies that separate us from other species and the world.”

In this book, Bridle has created a new way of thinking about our world, about being. How would we live our lives and change our world if we embraced this thinking? If we did not place ourselves at the center of everything? Please read this important book. Read it twice.

Talk about it. Tell everyone you know.