VIENNA (AFP) – The global atomic energy watchdog said on Saturday that Ukraine’s Zaporizhzhia nuclear power plant had been disconnected from its last remaining main power line to the grid and is now relying on a reserve line.

“Ukraine’s Zaporizhzhia Nuclear Power Plant (ZNPP) has once again lost the connection to its last remaining main external power line, but the facility is continuing to supply electricity to the grid through a reserve line, the International Atomic Energy Agency (IAEA) was informed at the site today,” the agency said in a statement.

“Less than 48 hours after Director General Rafael Mariano Grossi on Thursday established the presence of the IAEA Support and Assistance Mission to Zaporizhzhia (ISAMZ) at the facility in southern Ukraine, the Agency’s experts were told by senior Ukrainian staff that the ZNPP’s fourth operational 750 Kilovolt (kV) power line was down. The three others were lost earlier during the conflict,” it added.

“One reactor is still operating and producing electricity both for cooling and other essential safety functions at the site and for households, factories and others through the grid.”

Energoatom said on Telegram: “Due to continuous shelling by the Russian occupiers, reactor No 5 of Zaporizhzhia NPP was switched off.” 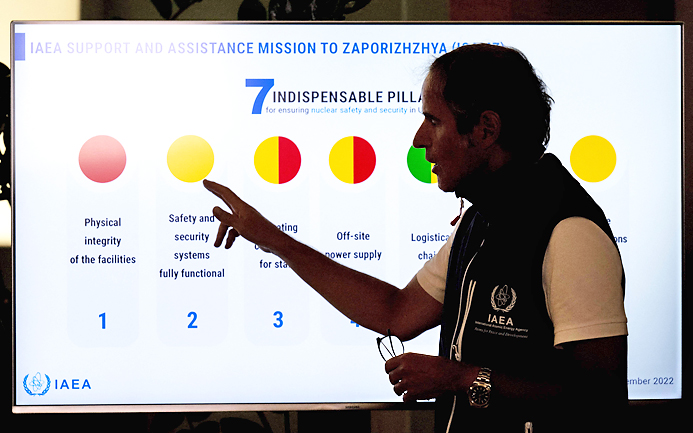