‘I could not believe it’, first responder says of the number of people affected

ANN/THE STRAITS TIMES – One hundred was simply too large a number even for experienced first responder Mohd Firdaus Abdul Samad to believe as he received the initial report about the landslide that hit the Father’s Organic Farm campsite in Batang Kali.

That number was what struck the 17-year veteran of the Hulu Selangor district Civil Defence Force (CDF) the hardest as he and his colleagues made their way to the site of the incident to begin search and rescue (SAR) operations.

Mohd Firdaus said he was on duty at the Hulu Selangor district operations centre last Friday when they received a call from the Mers-999 (Malaysian Emergency Response System hotline) about the incident at around 2.30am.

“I immediately contacted the fire and rescue station for confirmation, as I could not believe that the number of victims had exceeded 100 people,” he told Bernama on Saturday night.

“After receiving confirmation from the authorities including the police, I along with CDF officer Hilmi Husman and five other personnel rushed to the incident site,” he said. 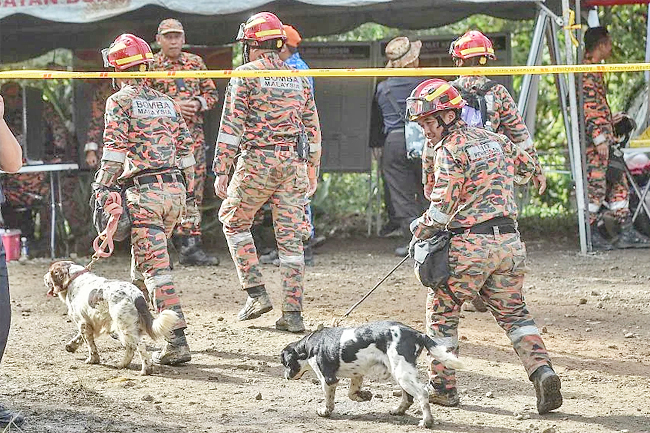 Rescue efforts were already underway when they arrived.

There were personnel from other security teams spread out across the area, responding to calls for help in the dark.

“As we began to deploy for the SAR operation, I saw a few victims coming out of the landslide area on their own, heading towards safety. Several of them used their flashlights to signal for help,” Mohd Firdaus said.

Everyone was wading through ankle-deep mud, he said.

Slippery conditions made it hard for them to move to assist victims, and there was a fear that another landslide could occur at any time.

Mohd Firdaus recalled a “very sad situation” when a male victim told rescuers that his wife and child were trapped in their car that was buried by the landslide.

“He shouted to his wife to continue to press the car horn so that we could locate her,” he said.