KARAMOJA, UGANDA (AFP) – In one of Uganda’s poorest and most lawless regions, anxious mothers clutch bone-thin infants in a malnutrition ward, terrified their child could be next to succumb to starvation in Karamoja.

One of Maria Logiel’s youngsters, too weak to sit up, bears telltale skin lesions caused by extreme hunger. The other, strapped to her back, stares gauntly from sunken eyes.

“I came with these two because they were badly off, and going to die,” Logiel told AFP at a hospital in Karamoja, a vast and isolated northeastern border region afflicted by drought, disease and armed bands.

“(But) I left two others home, and I worry that by the time I get back, they’ll be no more,” the 30-year-old mother said.

More than half a million people are going hungry in Karamoja, some 40 per cent of the population of this neglected, long-suffering rural region between South Sudan and Kenya. 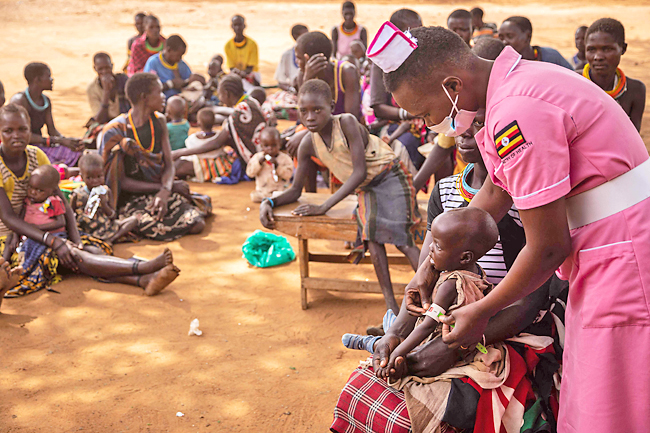 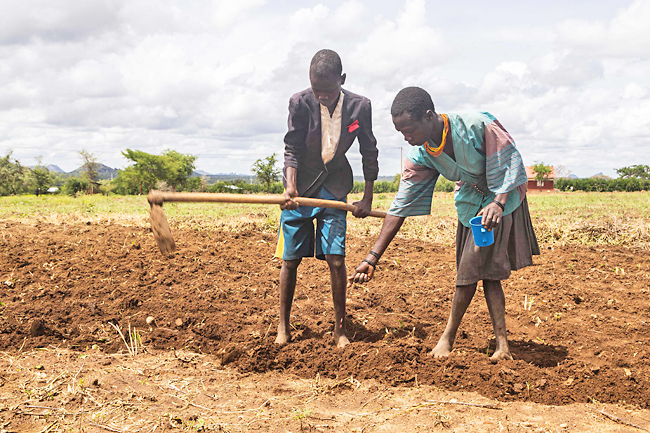 Natural disasters, plagues of locusts and army worms, and raids by heavily-armed cattle thieves have left little to eat.

As food has become ever more scarce, Karamoja’s most vulnerable residents are struggling to survive.

“In three months we have lost more than 25 children under five due to the malnutrition,” said district health officer Doctor Sharif Nalibe in Kaabong, one of Karamoja’s worst-hit districts.

“And these were the ones under our care, but (who) were brought at the last minute to the hospital. But there are many who die and (are) not reported in the communities.”

Starvation in Karamoja is going largely unnoticed as higher-profile crises, including looming famine in the Horn of Africa, and the war in Ukraine, compel global attention.

Even in Uganda, the desperation is out of sight, unfolding 500 kilometres from the capital Kampala in a part of the country long written off as harsh and volatile.

But the level of hardship is extraordinary, even by the extremes sometimes endured in Karamoja.

Across the region, about 91,600 children and 9,500 pregnant or breastfeeding women are suffering from acute malnutrition and need treatment, according to the latest assessment by humanitarian agencies and foreign donors.

“In terms of acute malnutrition… this year we have experienced the worst that we have had in the last 10 years,” said nutrition specialist Alex Mokori from UNICEF, which is screening for malnutrition in Karamoja with local authorities.

Logiel said she resorted to foraging to put food on the table, but the wild plants often made her children sicker.

In desperation, she would sometimes purchase the mealy dregs from a popular locally-made sorghum brew called malwa, even if the effect was mildly alcoholic.

Half a litre of this residue goes for about USD0.40 – often more than she could afford.

“Often we failed to raise money and the children sleep hungry,” Logiel said.

With a porous border and thriving illicit trade, Karamoja has endured decades of tit-for-tat armed cattle raids between nomadic clans that wander the lawless frontier between Uganda, South Sudan and Kenya.

These incursions make life even more miserable for Karimojong communities entirely reliant on livestock and crops to survive, and government interventions to disarm rustlers have not stopped the cycles of violence.

The erratic effects of a changing climate – Karamoja is experiencing harsh drought, but last year witnessed damaging floods and landslides – have only multiplied the hardships bearing down on the region.

“Now, with the prolonged drought, and cattle rustlers, and communities left with no source of livelihood, we are heading for the worst,” said Nalibe, the Kaabong district health officer.

For some, the worst has already arrived.

Nangole Lopwon went to sell firewood in a nearby village and left her hungry twins with one of her older children, only to return and find one of the young ones had died.

“What could I do? The child was not sick. It was purely hunger that killed him,” said the mother of five from Kaabong.

Now she, too, is malnourished, and the surviving twin in a dire state.

“Even this one is about to die,” she wailed.